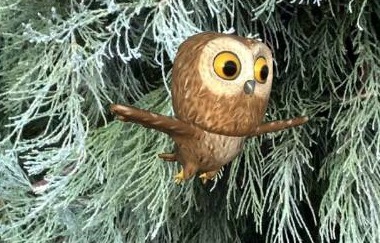 How the Doggerel went Digital

My dive into the  technology of digital storytelling and augmented reality began with the kind of doggerel I usually write on friends’ birthdays or other notable occasions, a few lines scribbled in rhyme for a Facebook post or inspired by an overdose of news (see my last Post Alley story).

This time it was the report of an owl that hitched a ride on a 75 foot spruce tree destined for Rockefeller Center that tickled my fancy and generated a rhyme for  the four year old son of a friend. His mom, Susan Heins, the founder of Immersive Kid, is also a  digital publisher, who miraculously turned my poem about Rocky the owl into a children’s storybook in less than two weeks,  a revelation to someone whose first book, over four decades ago, took over a year from final edit before it made it into print.

The process is still a mystery to me; after waiting through the long months between finishing a project and seeing it in bookstores, two weeks seems like magic. Of course, the only bookstores it’s in are Google Play and the Apple store, but maybe Rocky will turn up in actual print, between two covers, before next Christmas, when hopefully book stores will be open for browsing again.

Until then I’ve had to replace my tablet and two year old cell phone with  one that has a newer operating system (Android 10 or higher) so I can read it, an issue that hasn’t come up before in my publishing career. And those of my books that have made it into audio have never had Christmas music playing behind the narration.

Unlike most other digital storybooks, Rocky is not only interactive so kids can turn the pages on their screen but also rendered in 3D – the animated cutie can fly around the screen rather than just move up and down or side to side as well as decorate selfies and other digital photographs, not to mention Christmas cards.

To me, interactivity with a book used to mean turning the pages. In a digital book it’s that and more : in Rocky Owl’s Christmas Story it’s a read-to-me or I’ll-read-it-myself option accompanied by a page turning jingle and bringing objects on the page to life, like blinking ornaments on the tree. The sound track includes a Carol playing in the background while the owl hoots, the saw buzzes its way through the spruce, and the crowds in Rockefeller Center cheer the plucky little hero on.

I’ll be putting him on mine as soon as my new phone arrives and I figure out how to do it – my four year old friend has promised to show me – but meanwhile, he can be found here. “‎Rocky Owl’s Christmas Story on the App Store”

Jane Adams
"Jane Adams PhD was a founding editor of the Seattle Weekly. Among her twelve books is Seattle Green, a novel . She is a contributing editor at Psychology Today, and coaches parents of adult children."
Previous article
Insta Unfiltered, a Tech Tale
Next article
The Strait Poop: ‘Victoria Flush’ is No Longer