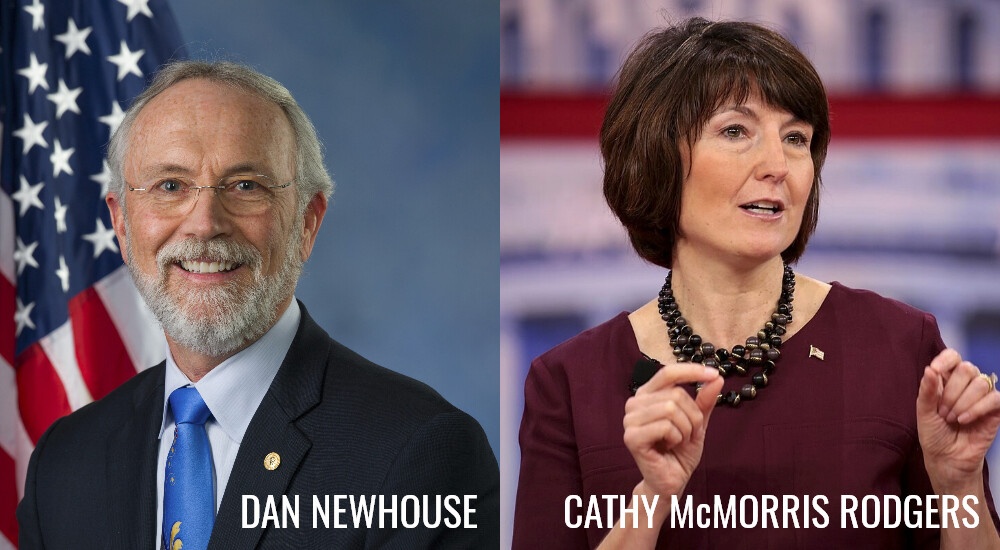 Reps. Cathy McMorris Rodgers and Dan Newhouse, two entrenched Eastern Washington Republican Congressmembers, have tried to put in soft focus and heavy makeup their decision to join Texas’ lawsuit to overturn the 2020 presidential election, as if an amicus brief were the political version of an Elizabeth Taylor perfume commercial.

“Joining this amicus brief is not about trying to overturn the results of an election but is simply about ensuring the American people have faith in our elections and our Constitution,” Newhouse said in a statement, uncritically reported in his Central Washington district.

Liar!! The suit, quickly rejected by the Supreme Court, is about reversing an election that Donald Trump lost by a 7-million-vote margin and taking away voters’ verdict in states of Michigan and Pennsylvania that Joe Biden carried by a combined margin of nearly 250,000 votes. The suit to which these two signed an amicus brief is about reinforcing Republican voters’ suspicions about legitimacy of the election.  It is about fleecing true believers of millions of dollars to support Trump’s political activities.

Above all, however, GOP members’ amicus brief is about fear — Republicans’ fear of crossing Trump and being on the receiving end of abuse by a man with 88 million Twitter followers. Due to that fear, they are forming a circular firing squad with Lady Liberty in the middle.

Newhouse was supposed to be made of better stuff.  He beat out Tea Party extremist Clint Didier to win a seat in Congress.  With ex-Sen. Slade Gorton as choreographer, mainstream Republicans ran media ads depicting Didier as an absolute kook, with Newhouse as a stand-up guy, a former legislator and state agriculture director. He needs a reminder that standing up for democracy and decency is part of a lawmaker’s job.

Memorably, near the close of the 2008 campaign, Sen. John McCain rebuked audience members’ personal attacks on rival Barack Obama.  He conceded on election night with grace and forced running mate Sarah Palin to stay silent. Years ago, Republican State Rep. Slade Gorton took the witness stand in an Okanogan County libel trial, to vouch for the character and patriotism of former Democratic colleague John Goldmark, red-baited out of the Legislature.

Newhouse is not a stand-up guy.  He stood down after a noisy show of support for DACA recipients, many from his district, when Trump tried to repeal Obama’s executive order permitting them to stay in a country where they have lived most of their lives.  He is a leading member of the Western Caucus, a group of right-wing Republican House members who applauded Trump’s actions to eviscerate the Grand Staircase-Escalante and Bears Ears National Monuments in Utah.

McMorris Rodgers and Newhouse represent a state that has used mail-in balloting for more than a decade.  It has boosted turnout. It has been administered, with no irregularities, by Republican Secretaries of State Sam Reed and Kim Wyman.  Republicans have run vote-by-mail elections in Utah as well. The obvious question is, Why is mail-in voting OK for Washington, but not for Wisconsin or Pennsylvania or Michigan or Georgia?  Because Trump lost.  America’s voters batted away Republican efforts to depress the vote, and nearly two-thirds of eligible voters cast ballots in the Nov. 3 election.

“Many people have had questions about the election results,” McMorris Rodgers intoned in her statement, citing “massive turnout” and “massive changes to voting processes,” adding:  “This case is about the Supreme Court answering those questions for the American people so we can move forward.”

Huh?  Haven’t the American people rendered a verdict by the aforesaid “massive turnout”? They pick a president, not the Supreme Court.  While McMorris Rodgers speaks of “razor thin margins,” Joe Biden carried Michigan by a margin of more than 150,000 votes, compared to 11,000 for Trump in 2016.

I covered the 2018 race between McMorris Rodgers and Democratic challenger Lisa Brown, a serious opponent.  McMorris Rodgers was not caught napping.  A friend in Walla Walla showed me multiple mailings by the incumbent, keyed to Washington’s mail-in ballots. McMorris Rodgers even held not-very-well-advertised town halls.

It’s pretty obvious, CMR’s signature on the amicus brief is a matter of caucus politics, seeking to bolster her bid to chair the powerful House Energy and Commerce Committee should Republicans retake the House in the 2020 election.  She’s taking a lesson from Union troops in the Civil War:  Secure your right flank.

Somewhere, in the clutter of my study, I have a faded 2008 John McCain campaign sign:  Its slogan:  “COUNTRY FIRST.” The Texas suit puts that to a test.  We have peaceful transfers of power in this country.  A great Eastern Washington politician, House Speaker Tom Foley, quickly got down to business with President George H.W. Bush in 1989. Outgoing Vice President Joe Biden, presiding over the 2016 electoral vote count, gaveled down Seattle Rep. Pramila Jayapal when Jayapal objected from the floor to counting of Georgia’s electoral votes.

Rep. Jaime Herrera Beutler, R-Wash., our state’s third Republican House member, has not signed the amicus brief.  She has shown signs of wanting bipartisan cooperation and a working House.  Reps. McMorris Rodgers and Newhouse signed up as honorary co-chairs of Trump’s 2020 campaign in Washington.  Herrera Beutler did not.

What should folks back in this Washington say and do about this? The first is not to forget an attempt to overthrow voters’ verdict.  The second, for media that endorsed McMorris Rodgers and Newhouse, is to condemn in strong terms, as The Orlando Sentinal forthrightly just did. The Florida paper’s editorial starts off by saying, “We apologize to our readers for endorsing Michael Waltz in the 2020 general election for Congress. We had no idea, had no way of knowing at the time, that Waltz was not committed to democracy.”

It’s worth keeping in mind for future elections that, while carrying counties east of the Cascades, Trump didn’t do so well in 2020, losing the cities of Yakima and Wenatchee and winning just 50.2 percent of the vote in Spokane County. Overall, Joe Biden won Washington by a margin of nearly 800,000 votes.  He stands to be a far more attentive president than Trump, who hasn’t come near us since May of 2016.

McMorris Rodgers and Newhouse can hunker down in their “safe” districts.  In stature terms, both could hide in a field of stubble.

Joel Connelly
I worked for Seattle Post-Intelligencer from 1973 until it ceased print publication in 2009, and SeattlePI.com from 2009 to 6/30/2020. During that time, I wrote about 9 presidential races, 11 Canadian and British Columbia elections‎, four doomed WPPSS nuclear plants, six Washington wilderness battles, creation of two national Monuments (Hanford Reach and San Juan Islands), a 104 million acre Alaska Lands Act, plus the Columbia Gorge National Scenic Area.
Previous article
Novelist Jess Walter Sets a Story in Early Spokane, Beset With Radicals
Next article
Out of the Balcony: Progress for Women in America’s Newsrooms