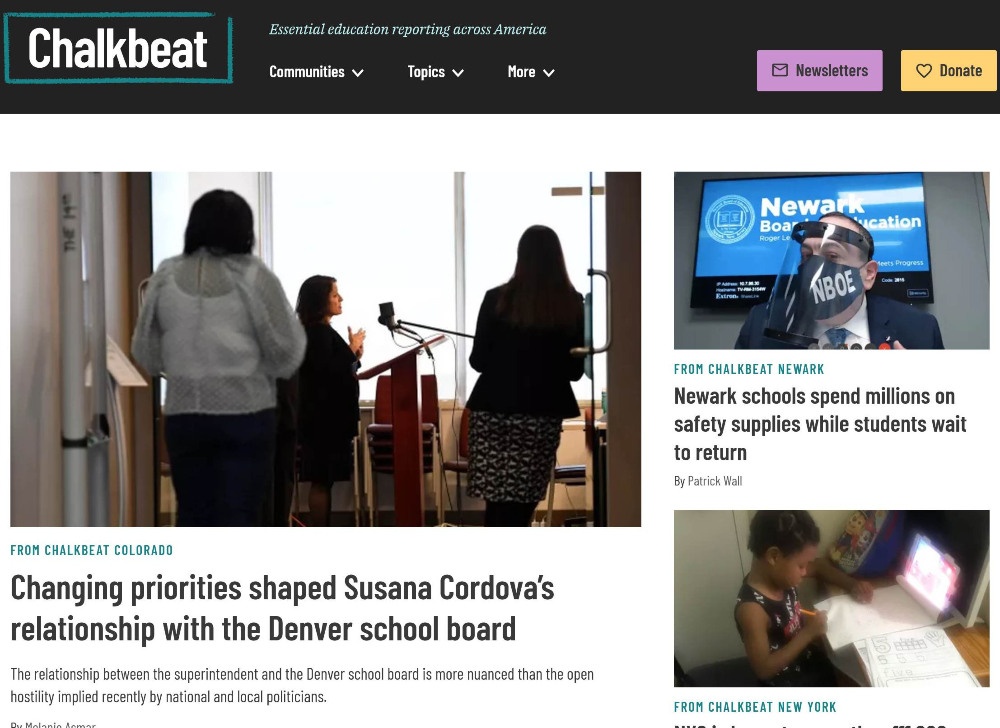 Is a ‘National Vertical’ Such as Chalkbeat.org the Next Media Killer App?

The other day I came across a nifty national online news service focused exclusively on education called Chalkbeat.org.  I suspect I have stumbled across one important future of journalism in the nation and in Seattle. I’ll explain shortly.

Chalkbeat was founded in 2014, and one of the founders, Elizabeth Green, is a formidable entrepreneur, cheerleader, and CEO. It aims to spread all over the country with this kind of “national vertical,” and it may also launch other topic areas. Currently there are local-reporting sites in Tennessee, Colorado, Indiana, New York, Newark, Chicago, Detroit, and Philadelphia, as well as many publishing partnerships. Readers sign up for the national version or one in your region and get a free daily newsletter packed with scoops by decently paid, skilled, and nonpartisan reporters. The current budget is $9 million, funded by donors and advertising sponsors, and the nonprofit company is run with sophistication.

Obviously, the education beat is a big one at the moment, particularly related to COVID closures and equity gaps. And it is a topic that national and local funders care enough about to fund the enterprise, and they particularly like the neutral, non-ideological,straight-reporting approach of Chalkbeat.

Another illustration is the local funding (Gates Foundation, Amazon, City University) for the Seattle Times‘ Education Lab, which deploys two reporters and three editors just on this topic and stresses “solutions journalism.” The Times has also created this hybrid model (nonprofit funding for a for-profit newspaper) for specialized reporting on transportation, homelessness, and investigations.

Chalkbeat founder Green notes that local dailies have great range in topics but not a lot of national synergy. Chalkbeat, by contrast, has a single topic and is “national.” In this sense, Green argues, it is much more attuned to the way people consume news these days — national standards, single topic. Chalkbeat’s national presence taps national foundations and provides sophisticated web infrastructure and scalable formats in city after city. It resembles the NPR network, with a national news broadcast, local reporting, and a broad funding base.

Chalkbeat’s national/local/single-focus formula looks to me like a killer app. I note that Politico.com, another vertical website (just politics and policy), is also expanding to other regions (Florida, New York, New Jersey, and California so far), and one could imagine variants of this model in urbanism, business, technology, and the arts, just to name a few.

Already national chains own media outlets all over the country, though many are predatory. In smaller countries such as England and Canada, the quality papers (The Globe & Mail, The Independent) are nationally available, often with some local content, while the provincial papers are ghostly. Get the drift?