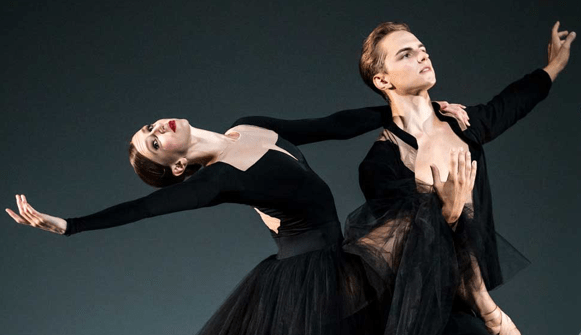 Streaming Scene: PNB in the House of Imagination

Each of Seattle’s major ensembles has found its own way to reach an audience. Most of the approaches have been on a modest scale, with few frills and little technical polish. Pacific Northwest Ballet is the grand exception. Its management and artists have hurled themselves wholeheartedly into making the best of COVID conditions, even making the epidemic into a frame, a theme, the very subject of the work.

Its first “repertory” program in mid-October was splendidly danced but a little incoherent, mixing short new works with excerpts from program staples (both newly shot and from the video archive). Its second, which has just concluded its five-day streaming window, also had its bits-and-pieces aspect, with a jokey video excerpt from Twyla Tharp’s 1994 chocolate box Waterbaby Bagatelles and (new to PNB) Susan Marshall’s brief 1984 duet Arms.

But the two works dominating the program and a number of sidebar videos, diverse as they were, share a single unstated theme: this present moment. Penny Marshall’s marvelous Wonderland demands that McCaw Hall be utterly empty, a cavernous void occupied only by a few tiny figures exploring it in darkness.

The orchestra pit becomes a play-pool, the steep-stacked boxes a jungle gym, the yawning stage a game-board. By nature it can never be part of the company’s live repertory, but as an artifact of a moment, it will endure and move audiences who never knew the stress of isolation and frustration its creators wrought it from.

Amanda Morgan’s equally inspired This Space Left Intentionally Blank is the outdoor mirror of Wonderland, a traversal of Seattle Center’s tawdry amenities and backyards, including Memorial Stadium, the parking garage, and the arid, forbidding exterior environs of the Company’s offices and studios. Morgan’s movement is less exploratory than evocative; the dancers seem to be trying anything they can think of to animate this lifeless landscape. They don’t succeed, but they go down fighting.

Another new Marshall work Alice, turns her Wonderland inside out: riffing on themes of Lewis Carroll with the phenomenal Noelani Pantastico, confined to a tiny dollhouse barely big enough to contain her and a huge glass table, director/videographer Bruno Roque turns the space into a frazzled snow-globe filled with bits of dancer (and duets for one), spoken fragments of Carroll, and broken flashes of Michael Wall’s found music. Acute claustrophobia has never seemed so liberating.

The other big new work, though more conventionally balletic in theme and presentation, is just as ambitious and as iconic of the moment. Ghost Variations takes its title from a set of variations for piano written over the few days in 1854 before Robert Schumann descended into insanity and confinement to an asylum.

Jessica Lang’s ballet is set to excepts from this suite as well as music written and arranged by his wife Clara, the great love of his life and only now beginning to be appreciated as more than a humble handmaid to he frenzied husband.

The music is solemn but lyrical. Four couples garbed in a kind of Gothic pastiche of mourning clothes, swirl the bare stage constantly in austere abandon; sometimes accompanied by shadow avatars behind a screen. The ardent chill they generate is unsettling, ambiguous, yet as exhilarating as ice-water on a hot day.

I’m eager to see the piece again; and if I’m lucky I shall; it’s the one piece of new work in this program designed for presentation on a multi-work live dance program. But the whole PNB’s second streamed program of the season should be preserved as a whole, despite the difficulties posed by Union rules and copyrights. Made with determination and imagination against the most inimical conditions imaginable, it may come to be seen as one of the harbingers of a new era performance, when all forms of delivery to an audience are seen as equally valid. I salute the company, its management, and particularly the patrons who gave abundantly to realize the vision.

Roger Downey
Born in Canada moved to Peru's altiplano at the age of six; came to the U.S. at 10 to discover that you don't use your feet to dribble the ball. Learned from the git-go that "America" is an idea, not a place.
Previous article
Our Bromance with Bernie
Next article
“This Us-and-Them Has to Stop” – Council member Juarez Unloads