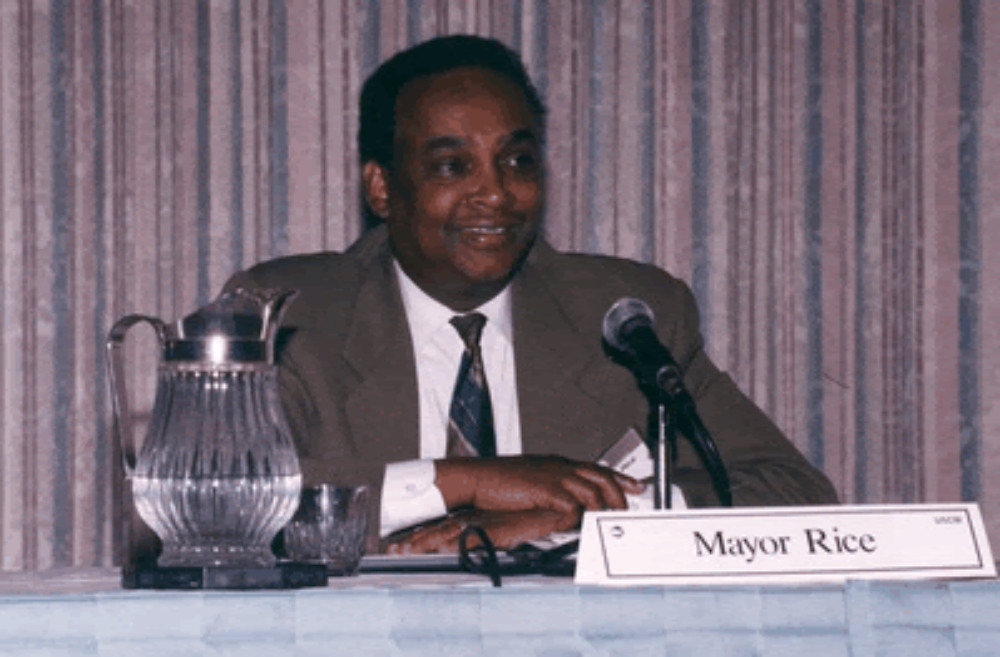 Former Mayor Norm Rice’s new Book: Bringing People Together to do What

Times were ugly. Seattle citizens were divided into opposing camps, and a racially-charged initiative was on the ballot. That angry split 30 years ago pushed a candidate to file for mayor on the last day of filing with only 20 minutes to spare.

The surprise candidate on July 28, 1989 was Norman Blann Rice, a veteran (11 years) Seattle councilmember. Earlier, despite his friends’ urging, Rice had flatly declined to run for mayor citing two unsuccessful campaigns (for mayor in 1985; for Congress in 1988). What finally pushed him to run again?

In his new book, “Gaining the Public Trust: A Profile of Civic Engagement,” Rice explains that he filed because things had grown so divisive. One of the mayoral candidates, Republican City Attorney Doug Jewett, had drafted initiative 34 (“Save our Schools”) to ban busing as a means of integrating Seattle Public Schools. Although there were a dozen others in the mayoral race, none was addressing the split in the city.

When he announced, Rice explained, “The needs of our community have not been given the full, clear voice they deserve. Rather than words of vision, we have all heard new, shrill voices of division — setting community against community, neighborhood against neighborhood, institution against institution, and most alarming of all, race against race.”

At the time, Seattle Public Schools were facing a crisis of confidence with voters being asked to repeal the busing plan that had been a point of pride 10 years earlier. but had lost much of its luster. Seattle had never been ordered by the courts to bus its students. Most citizens were proud of having voluntarily taken the step towards integrated classrooms, even though white flight had been a byproduct.

When Rice entered the race, he campaigned on the need to bring people together. But the question remained: To do what? After a strong primary win and defeating Jewett (58 to 42 percent), the question remained. The media were quick to point out that the city had sent a mixed message, narrowly approving the anti-busing initiative, while electing the first black mayor in a city with only 10 percent black population.

After his election, Rice faced up to that unanswered question: Bring people together for what? The answer is the theme of Rice’s new book. During his campaign, Rice had called for an Education Summit. Once in office he enlisted supporters such as Bob Watt (soon to be Rice’s invaluable deputy mayor) and ace organizer Sue Tupper, the Rainbow Coalition (a key to Rice’s campaign for mayor), and created a planning committee co-chaired by his wife, Dr. Constance Rice and KING Broadcasting’s CEO Ancil Payne. The co-chairs selected a group of 60 to set the agenda. That eventually led to 300 citizen meetings and to two days of carefully facilitated community-wide brainstorming.

In all there were 32 neighborhood meetings with 4,500 Seattle residents participating. Those attending represented all points of view; but they worked together to define problems and set goals. They settled on an overarching mantra — helping Seattle children stay “Safe, Healthy and Ready to Learn.” They proposed an ambitious plan  — beefing up health care and social services, underwriting Head Start programs, supporting families — all to be paid for by the Families and Education Levy, a seven-year city property tax. The levy was readied for the ballot and passed with a 57 percent approval in November, 1990. Since then, it has grown significantly and serves to surround public schools with support programs. It has been renewed by Seattle voters four more times.

The success story of bringing citizens together takes up the bulk of Rice’s book. He devotes concluding chapters to another of his break-throughs: revitalization of Seattle’s downtown after the closing of two anchor institutions, Frederick & Nelson and I. Magnin’s. Faced with a downtown that was turning into a ghost town, Rice enlisted local business leaders, reopened Pine Street to traffic, and made use of federal funds to assist in bringing downtown back to life. In all these efforts at broadening public involvement, money for the programs was a key ingredient.

Once again Rice — sometimes nicknamed “Mayor Nice” — applied his formula of really listening to people, hearing what they were saying, defining the problem, and exploring solutions before coming up with mutual strategies.

Rice’s book lays out his techniques for solving city-wide problems. One helpful tip: When listening to citizens, repeat what you just heard them say, making sure you understand them and giving them a chance to correct you. A concluding section of the book suggests repeating these techniques with a Homelessness Summit. Could that work? Rice, interviewed about the book this past week, quickly acknowledged that face-to-face meetings engaging hundreds of citizens is not something that would work today, certainly not in the midst of a pandemic. “It would be hard today. There are different political structures. And most councilmembers represent, not the entire city, but smaller districts.”

At the time of the Education Summit, citizens could assemble together in groups and were able to communicate their thoughts. Rice commented, “Today Zoom does this somewhat. Could we have an electronic summit? We would need to ensure that everyone could tune in. You can’t go door-to-door, you can’t talk face to face and meet to work things out.”

Rice’s short book resolves many of the mysteries of those times 30 years ago, when the city was divided and when politics turned bricks-in-the-windows ugly. It is an inspiring read, particularly with its many pictures evoking the people and the times. There is an aura of nostalgia but also a conviction that leaders like the popular and trusted one they called “Mayor Nice” can bring people together, if you do it with great care and organization.

Rice’s book, published by Endicott and Hugh Books, can be ordered through independent book stores and through Amazon. It’s a slim volume but it packs a wallop.

Jean Godden
Jean Godden wrote columns first for the Seattle Post-Intelligencer and late for the Seattle Times. In 2002, she quit to run for City Council where she served for 12 years. Since then she published a book of city stories titled “Citizen Jean.” She is now co-host of The Bridge aired on community station KMGP at 101.1 FM. You can email tips and comments to Jean at jgodden@blarg.net.
Previous article
Why the Polls were Wrong: We’re Exhausted by Change
Next article
A West Coast Agenda for Biden’s Environmental Goals