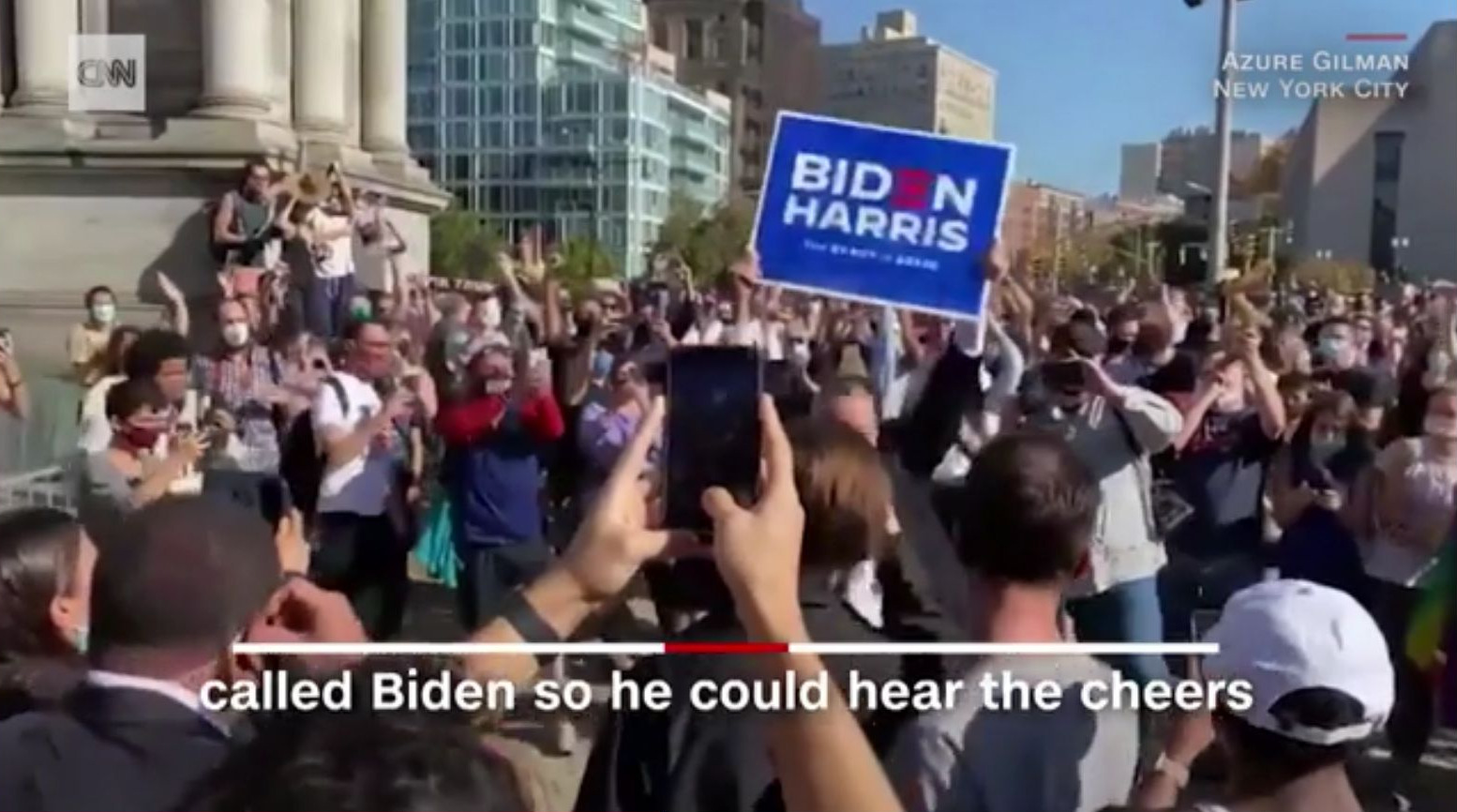 The Election: Some Complications with your Joy?

It’s right to be jubilant about the Biden-Harris victory in what’s likely the most important election of our lifetimes. Our democracy has been saved from what was certainly going to be its demise if Donald Trump had been re-elected.

If validated and feeling re-empowered, Trump would have tried to jail political opponents (criminal investigations are already under way). He would keep considering himself above the law, and refuse to accept Congressional oversight. He would further use national security assets for personal gain (as in aid to Ukraine), persist in collecting money from foreign powers in violation of the Constitution, and turn the federal bureaucracy from top to bottom into a Spoils System based on loyalty to him.

He has already done grievous damage to the concepts of truth and mutual trust that underlie democracy—not just by lying constantly and discrediting contrary views but collaborating with right-wing social media to spread false information and wild conspiracy theories which his ardent followers believe with near-religious fervor.

Some mainstream outlets unwittingly join in the process by exhibiting undiluted anti-Trump bias, opening themselves to attack and distrust.

And Trump will not be gone for certain until Joe Biden and Kamala Harris are sworn in on Jan. 20. It’s even conceivable—though unlikely– that Trump could steal the election if he can get the US Supreme Court to uphold some of his flimsy charges of voter fraud—or sustain a move by GOP legislatures in key states Biden carried to ignore the popular vote and name Trump delegates to the Electoral College. That would demolish public respect for the judiciary, though, completing Trump’s assault on American institutions.

It’s unlikely because the Court majority, ideological though it is, presumably values its reputation as one branch of government that puts loyalty to the US Constitution ahead of partisanship..

But there’s still no end of chaos Trump and his passionate followers could cause before Inauguration Day. He plans public rallies to support his claims that he actually won the election, possibly inciting heavily armed right-wing groups to engage in violence on his behalf. The Left’s equivalent, Antifa, would be happy to join in. So far, miraculously, violence has been limited.

And we can fully expect Trump to do all he can to weaken Biden’s presidency. He’s refusing to co-operate in the normal transition process, with the General Services holding back funds and facilities.

Trump could cause further mischief by using executive orders to deplete the federal bureaucracy, defund programs originated by Democrats, and fire “disloyal” officials like Anthony Fauci and FBI Director Christopher Wray (Defense Sec. Mark Esper, who refused to deploy federal forces to quell domestic dissent and was planning to remove the names of Confederate generals from military bases is the first to go.) .

The Supreme Court may assist him by declaring Obamacare unconstitutional, immediately depriving 20 million people of health care coverage and eliminating the requirement that all insurance plans cover pre-existing conditions.

Joe Biden is beginning his pre-presidency laudably—by vowing repeatedly to represent Trump voters as well as his own, issuing no new criticisms of Trump and setting in motion a program to address the nation’s biggest challenge—the COVID pandemic that’s surging toward 300,000 deaths by the end of the year, plus the economic  pain associated with it.

Early indications—such as stock market surges—indicate the country approves of his election and is overjoyed at the prospect that an effective COVID vaccine will be available soon.

But Biden faces a deeply divided country. His election was based on narrow margins in every battleground state. His party lost seats in the US House and failed to flip a single Republican-dominated state legislature (not Pennsylvania, not Michigan, not Wisconsin, Ohio or North Carolina)  putting the GOP in position to gerrymander themselves next year into power for the decade to come.

And Democrats failed to capture control of the US Senate (it’s possible, but unlikely, they could do so by winning two elections facing runoffs in Georgia) so that GOP leader Mitch McConnell will continue able to thwart enactment of Biden’s broad agenda to improve the lot of middle class voters, make the rich and corporations pay higher taxes, expand social programs and bring climate change under control.

Fortunately, Biden and McConnell are friends based on their long service together in the  Senate.

I could envision Biden’s immediately meeting with McConnell and saying something like, “Mitch, the public deeply distrusts  the federal government, Congress most of all. The country is split into increasingly hostile tribes. We have got to prove that conventional politicians like us can get important problems solved. It’s not only in the country’s interest, but our own: you and I both want less chaotic politics and a 2024 presidential election that doesn’t pit a right-wing populist against a Socialist.

“Let’s begin by agreeing on a COVID economic stimulus package generous enough to provide income to 12.6 million unemployed Americans, the thousands of small businesses facing imminent bankruptcy and the health care facilities and workers stretched to their limits. Somewhere between the $1 trillion you favor and the $2.2  trillion in the latest Democratic proposal, tilting toward the Democrats’ number since they’ve already come down a long  way from their original $6 trillion.

“After that, let’s pass the broad infrastructure bill that Trump promised but never delivered, a bill to lower prescription drug prices, another to fix or replace Obamacare so that health care is more available and affordable and a measure to give police in America more funding if they shift their focus from military occupation to community policing. If we accomplish a lot in a year, we might have a civil mid-term debate about tougher stuff.”

Biden also faces a divided Democratic party—the moderate tribe vs the Progressive tribe. The latter—now led (thanks to outrageously abundant media coverage) by Rep. Alexandria Occasio-Cortez as much as Bernie Sanders—will assail Biden  for being too chummy with McConnell and not enthusiastic enough about the unaffordable, unrealistic Green New Deal, Medicare for All, and free college for all.

The moderates, led by Biden and House Speaker Nancy Pelosi are in command right now. The election results suggest that voters opted for divided government so that Democrats would hold the White House, but would be barred from turning the country far-left.

They were put off by wokeness, limits on free speech, peaceful protests that went violent, and proposals to defund police and abolish border enforcement agencies.

AOC and her crew will not accept that diagnosis. They’ll argue the party didn’t win across the board because it was not left enough. Polls do show that on loads of issues—climate change, gun control, taxing the rich, health care etc.—the public supports progressive policies. But in the voting booth, where it counts, the country is more center-right than center-left, and certainly not Seattle-style left.

Biden surely didn’t want divided government. He still hopes to win back the Senate and make it easier (but not easy) to pass his center-left agenda. But one favorable result for him is that the public has put restraints on leftism that he’s not responsible for.

Perhaps Biden can put Kamala Harris in charge of meeting with AOC and her Progressive band, explaining political reality and assuring them that Biden will be as progressive as he can be, but that voters have limited his capacity to satisfy the left.

Biden is inheriting a country almost rent asunder by Donald Trump. He will restore honesty, dignity, decency, experience and compassion to the presidency. Let’s hope it’s enough to get things done and make Red and Blue Americans believe again that they can live together and truly make America great again.

Mort Kondracke
Morton Kondracke is a retired Washington, DC, journalist (Chicago Sun-Times, The New Republic, McLaughlin Group, FoxNews Special Report, Roll Call, Newsweek, Wall Street Journal) now living on Bainbridge Island. He continues to write regularly for (besides PostAlley) RealClearpolitics.com, mainly to advance the cause of political reform.
Previous article
Shots Felt Round the World: What to Make of the 90% Vaccine
Next article
Why the Polls were Wrong: We’re Exhausted by Change