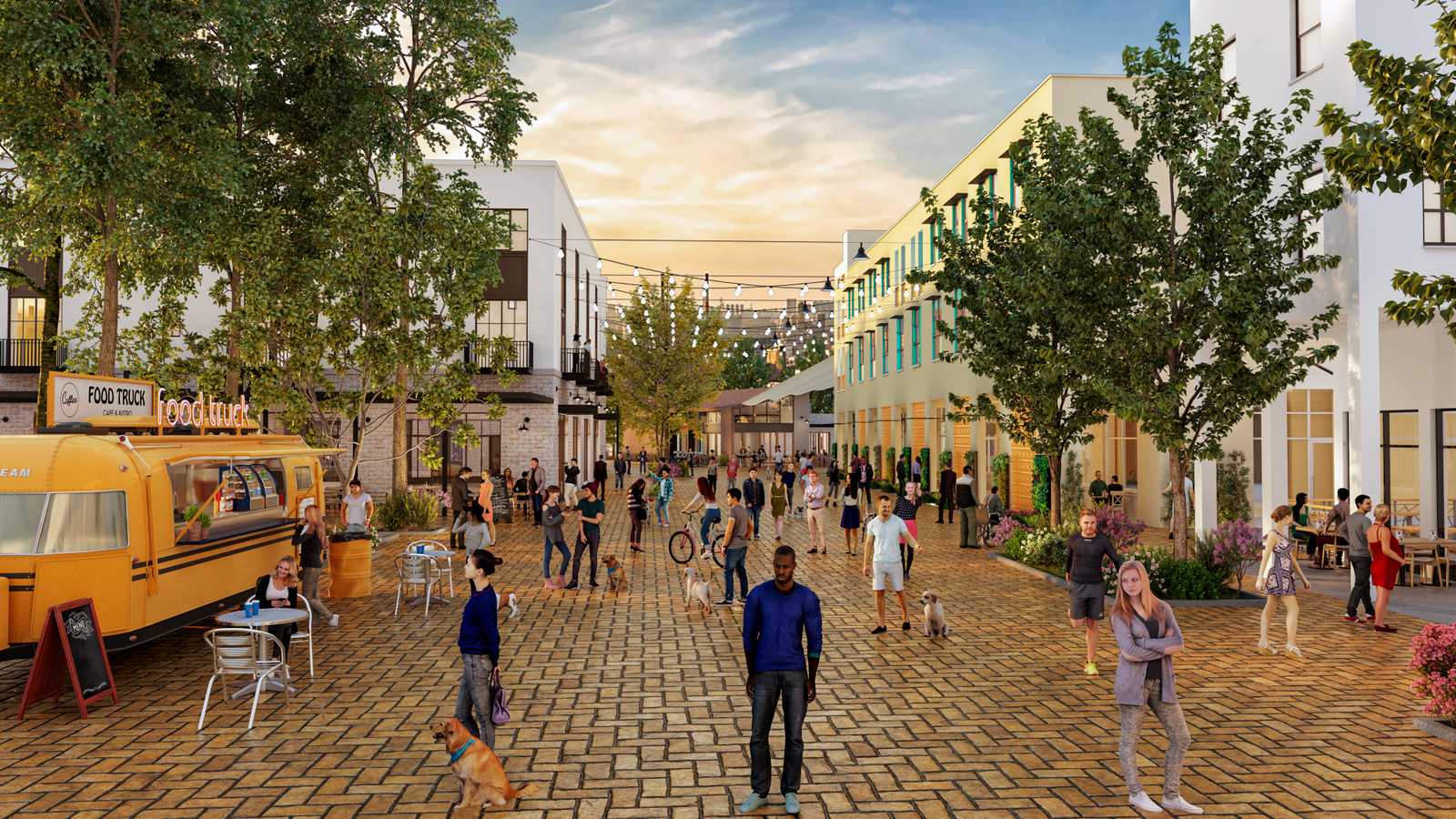 Taken for a Walk: The Mythologies of Car-free Communities

The New York Times recently featured a development project in the Phoenix, Arizona metropolitan area that claims it will be car-free. Its future 1000 residents will be provided with not one single spot to park in. Only visitors and shoppers from outside the community will find parking. Apparently, the occupants of 761 apartments won’t need to own a car. The article touts the on-site grocery store and coffee shop that will meet resident’s needs. For everything, people will walk or bike or take the bus into nearby Phoenix or Tempe.

Now, far be it from me to discourage anyone from trying out innovative development. God knows over my 44 year career in urban design, I’ve worked for enough developers and public authorities to know that its possible to offer some different choices and some people will welcome them. And if the locally-based proponents of the scheme are risking their own money, I say, go for it.

Possibly the most startling aspect of the article is how little research the writer seemed to do. Perhaps the relentless chaos of COVID and crazy politics has absorbed every reporter’s attention span. But that’s where the magic of google search comes in. I would not expect a typical newspaper reporter to know the history of urban development in the U.S. over the past 100 years, but a few clicks would give one far more information than could be crammed into a dozen column inches. Even a 15 minute phone call with one of the scores of readily available professors and researchers in urban planning who work in New York City would have provided some useful perspective.

Instead, we get a superficial puff piece that the development team will likely include in their marketing website and frame in their model unit.

To cut to the chase. In the last 30 years alone there have been hundreds of developments from coast to coast and every point in between that have heralded similar claims. Perhaps totally (or almost totally) car-free is novel. But when was that goal ever an objective of urban development plans? Actually, it was – for a brief period in the 60’s. To disastrous results. Many cities were persuaded by formidable people like architect Victor Gruen, that they could banish cars from their centers and compete with suburban malls. Hundreds of car-free malls were built. After a short honeymoon period, most did little to nothing to revive their downtowns. A number of cities, Tacoma among them – spent boatloads of money decades later – “de-malling” themselves. (To be fair, a handful of places were successes – mainly college towns like Boulder, Colorado.)

A few things immediately pop out in the glowing article. First, 1000 people is not enough to support a  full service food market. Doubtful even a 7-11. It takes multiple thousands of people living within an area to support a food market. Perhaps the developers intend to subsidize it as a “loss leader.” That would likely require not only free rent but paying for staff and much of the stock. But I suppose that’s possible. On the other hand, a coffee shop is a no-brainer. You could probably toss one into any Arizona trailer park and it would do just fine.

Moreover, car-free living requires more than food and caffeine. There are clothes to buy. Tools and sinks and furniture. Jobs to go to. Museums and theaters to attend. Likely in scattered locations. For a community to even have a reduction in car use, means the region around it must offer many modes of transit running on frequent headways, serving many directions. The last time I checked, the Phoenix area did not fit that description.  My few times in the metro area always involved interminably long auto trips, often with queues of cars stretching for miles randomly throughout the day and evening. Yes, I know Phoenix has light rail; that’s not unusual for any large city today.

The article also mentioned price-points for apartments being in alignment with those of the metro area – ranging from $1000 / month for a studio to $2000 / month for two-bedrooms. Evidently, this is a community that does not expect to accommodate lower-income households. It seems car-free living is reserved for the well-off. If indeed the development is intending to include a substantial number of below-market apartments, the article might have noted that.

As I indicated earlier, North America has seen many developments deploying interesting and innovative principles. The movement in design and development known as New Urbanism has been offering them for several decades. I have never been a huge fan of New Urbanism but at least they have a solid track record of interesting development projects that are highly walkable, bike-friendly, and planned around main streets, public greens and squares. Being car-free is usually not at the top of the list of objectives. That is partly because most people do in fact need means of transport that can take them to distant places. Its hard for me to imagine one of the early railroad towns of the American West touting that it would be horse-and-buggy-free.

One final note. I live in a splendidly walkable village of less than 1600. Almost every good and service one needs on a daily basis is available within a 10 minute walk. People use bikes as well as walk. And there is a bus network that connects to a dozen other places as well as to three airports and five train stations.  Despite the choices we have here, we still need a car for an occasional trip to IKEA or a big housewares store. Indeed, full confession: there is a little black subcompact car sitting just outside the window near me.

But hey, let them try it. The advocates of a free market economy would say “If people really want something, they will buy it. If not, them’s the breaks.” Despite my reservations here, I truly wish them well.

Mark Hinshaw
Mark Hinshaw is a retired architect and city planner who lived in Seattle for more than 40 years. For 12 years he had a regular column on architecture for The Seattle Times and later was a frequent contributor to Crosscut. He now lives in a small hill town in Italy.
Previous article
How the “Grand Committee on Postponed Questions” Created the Electoral College
Next article
Welcome Back? America’s Challenges in Rejoining the World Community