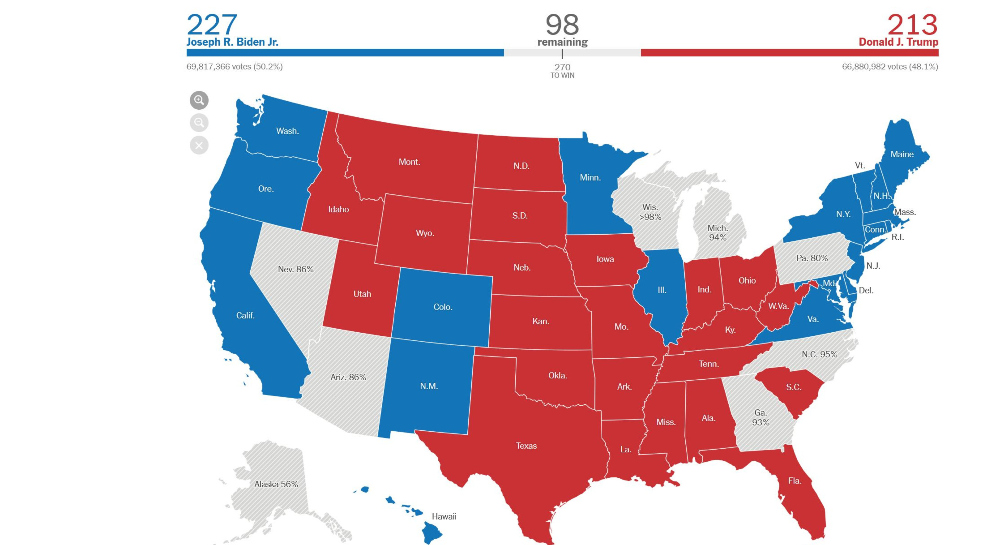 Excuse the bleary vision, but here are some early takeaways from the election.

1. Polls. Wrong again, though it looks like the Biden Team had a much more accurate reading of the electorate and the close races. As in 2016, the late votes broke in Trump’s direction. One suspicion: when polls show a wide lead for one candidate, those voters relax while the underdog gets motivated. Thus the predicted Blue Wave turned into the Blue Ripple.

2. Incumbents Rule. I expected a tide of tossing out incumbents, given all the discontent with government polarization and inaction. Not so fast. Nearly all incumbents in this state prevailed; even the embattled Mayor Ted Wheeler of Portland seems to have survived. And many U.S. Senators got reelected, despite their toadying to Trump.

3. Trump Voters. Not going away, not sobering up, expanding and militant, not understood by the mainstream media. Some mobilizing factors: fear of government expansion, verging on socialism; too many scary “Portland” images; the stress on equality by liberal programs, suggesting limits on individualism and freedom; widening appeal of masculine messaging, now extending to Black and Hispanic males.

5. GOP Fizzles. There were some races that could have been a barometer for Republican revival, but no such evidence. Loren Culp’s better-than-expected 40.4% showing against Gov. Jay Inslee I read as more of a send-a-message vote. Battling sex education, including the superintendent of public instruction, made little headway. Secretary of State Wyman got a scare and Republican state Treasurer Duane Davidson got shown the door. The 8th C.D. is now lost for good (pending redistricting). More years in the wilderness for the state GOP.

6. In a Rut. Just as the 2016 presidential election stayed very much in the channels of the 2012 election, so it happened this year. The nation is polarized, tribalized, resembling the trench warfare of World War I. Hopes of really changing the South were dashed. The Southwest (Nevada, Arizona, New Mexico, Colorado) are increasingly extensions of California, as the West Coast expands into the Southwest. The closeness of races in Texas, Georgia, North Carolina, and Florida will prompt Republicans in those states to tack toward the center. Also striking is how divided are individual states (including Washington and Oregon), with the fault lines being the large metro areas and suburbs versus “upstate.”

7. Hedging Bets. Overall, I read the election as overwhelmed voters ratifying the American system of checks and balances. Get rid of Trump, but keep the GOP Senate and the Supreme Court. Protect minoritarian rule by supressing votes and protecting the skewed system of the Senate and the Electoral College. Vote for stalemate and then complain about inaction!

David Brewster
David Brewster, a founding member of Post Alley, has a long career in publishing, having founded Seattle Weekly, Sasquatch Books, and Crosscut.com. His civic ventures have been Town Hall Seattle and FolioSeattle.
Previous article
How to Assess Tonight’s Presidential Race Results
Next article
Good Counsel for Hard Times