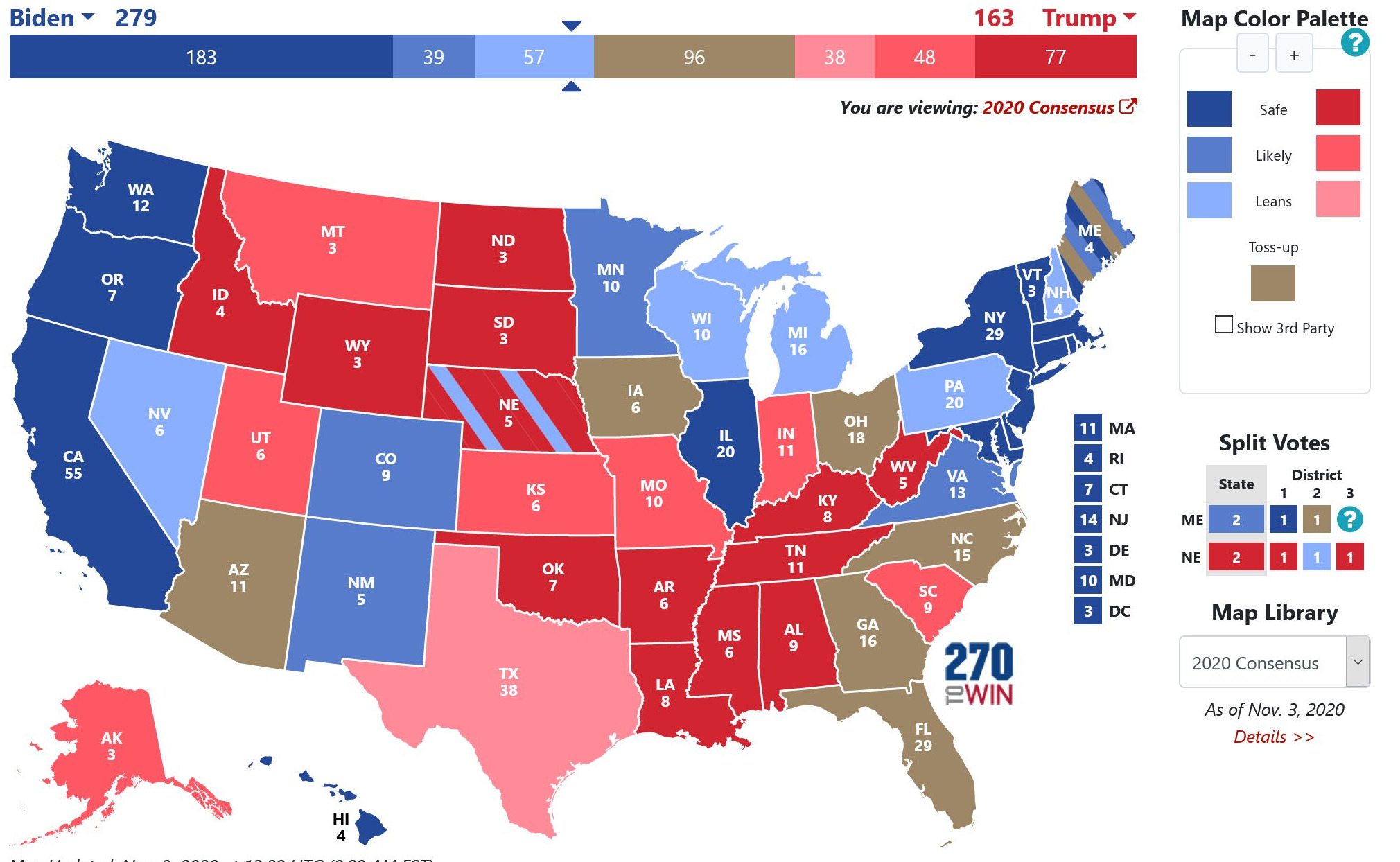 It’s finally here. The end of the trail. The day of reckoning. Election Day. Doomsday, maybe.

For the second presidential election in a row, Trump is trying to draw to an inside straight. The poll averages have Biden with a healthy lead in the national polls (7.2 points according to RCP, 8.4 according to 538). But there are only a handful of states that actually matter. And in those, the race is closer than the media has made it out to be, although if the poll averages are even remotely right, Biden should win, and we should have a fairly clear indication of that tonight.

Once the polls start closing on the East Coast around 4 pm Pacific time, those of us who are going to be obsessively cycling through the cable nets for the latest update are going to be assaulted with a blizzard of exit polling data and early projects from states where the outcome is not in doubt.

So how to understand the results, and sort what matters from what doesn’t? I’m probably going to badly embarrass myself by weighing in now, but hey, you only go through an election that feels this consequential once (I hope). So here goes. Looking at when the ballot results will start coming in, I see a two-front war playing out on Election Night:

First, the Sun Belt front. There are five states that matter, six if you want to include Iowa (which I don’t). Georgia starts reporting at 4 pm Pacific. North Carolina at 4:30 pm. Florida and Texas, 5 pm. and Arizona at 6 pm our time. The polling says all of these traditionally red states are close, but I refuse to believe Biden will win any of them until it actually happens. The good news for Dems is that these states are likely gravy. If Biden does break through in any of these Sun Belt states, it’s almost certainly game over for Trump.

Second, the Rust Belt front. Victory on this front is where Biden should lock it up. Ohio starts reporting at 4:30 pm. Pennsylvania at 5 pm. Michigan and Wisconsin at 6 pm. If Biden takes any three of these four – as he should! – it’s also game over. Ohio will likely turn out to be a stretch – Trump won Ohio by 8 points in 2016, and he leads by about a point in the current poll averages – but the polling averages say he should win the other three. Of those, Pennsylvania is the one that’s closest (final 538 poll average said Biden +4.7, RCP has it a much scarier Biden +1.2) and where Trump probably has the best chance of scoring an upset.

Contrary to what the media is saying, unless the vote count is really close we should more or less know the Pennsylvania results tonight. Yes, there are seven counties that won’t be reporting their mail ballots counts until Wednesday, but they are mostly smaller counties and collectively they only represent a little over five percent of the state’s population. So if Biden is leading in Pennsylvania tonight, it’s probably time to break out the champagne. On the other hand, if he’s losing Pennsylvania by any significant margin, that means serious trouble.

If Biden loses Ohio (as I expect) and is trailing by more than a point or two by the end of the night in PA, then he likely has to win at least one of the states on the Sun Belt front in order to win. Arizona seems the most plausible (538 has Biden up +2.6, RCP says Biden is up less than one point), but if the polls were that far off in Trump’s direction in Pennsylvania then they probably are similarly off in Arizona, a state that has voted Republican in every presidential election since 1952 with the one exception of Bill Clinton in 1996.

So to be blunt, my read of the situation is that this presidential race starts to look like a really iffy nail biter if Biden doesn’t win Pennsylvania. Or to put it another way, the Keystone State holds the keys to the gates of heaven.

Sandeep Kaushik
Sandeep Kaushik is a political and public affairs consultant in Seattle. In a previous life, he was a staff writer and political columnist at the Stranger, and did a stint as a Washington State correspondent for Time Magazine and for the Boston Globe, back in the olden days when such positions still existed.
Previous article
Why The New England Journal of Medicine’s COVID Leadership Editorial is so Extraordinary
Next article
Election Takeaways: Let’s Hear It For More Stalemate!