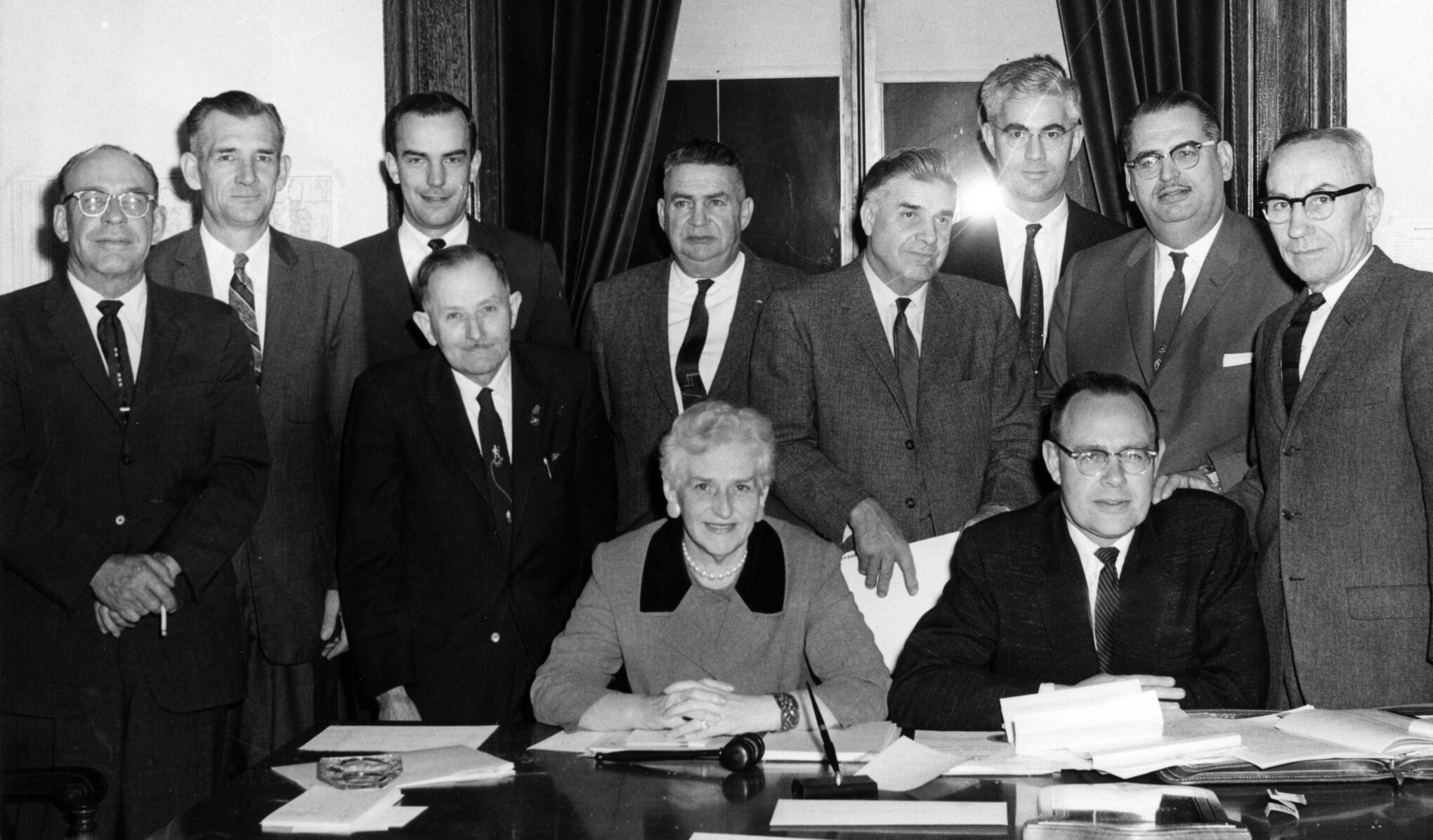 Julia Butler Hansen was called “the little old lady in logger’s boots” as a legislator in Olympia and powerhouse in Congress, a nickname bestowed out of respect as well as fear for the “Gentlelady from Cathlamet.”

As a state legislator, chairing the Roads and Bridges Committee, she more-or-less ran the State Highways Department, as a deal maker on the House floor and at night drinking with the boys, in words of colleague State Sen. Perry Woodall, “with her cigarette held at a jaunty angle.”

She would win her seat in Congress in 1960, a year when just 27 women sought election to Congress and only 16 were victorious. Today, the Democrats’ caucus in the House numbers 103 “gentleladies.”  She earned quick favor with the Democrats’ leadership, hiring as secretary a young lady engaged to the son old House Majority Whip Hale Boggs.  (Boggs’ son Tommy would become a notorious D.C. lobbyist.)

She would quickly win a seat on the House Appropriations Committee, and become the first woman to chair an Appropriations subcommittee.  Hansen would change venue, not style, drinking martinis at The Monocle on Capitol Hill. The Interior Appropriations panel oversaw a vast chunk of the federal budget, including the U.S. Forest Service, the National Park Service, the U.S. Fish and Wildlife Service, the Bureau of Indian Affairs – all agencies of vital importance to her Southwest Washington district.

Our state historian, John Hughes, a former editor of The World in Aberdeen, launches his biography with a classic Julia story.  Alaska Gov. Wally Hickel had just been tapped as U.S. Interior Secretary in the Nixon Administration.  He was asked by reporters at Seattle-Tacoma International Airport what he thought of Hansen’s views on fisheries and timberlands.  “Julia who?” Hickel asked. Wally would try to apologize, but was put off in his attempts to see the “busy” Congress member.

He finally showed up unannounced and delivered a mea culpa.  “I want you to know how embarrassed I am,” he told her. Hansen shot back: “I am a member of a minority, the so-called women’s minority.  We’re accustomed to being discriminated against.”  She proceeded to demand more federal dollars for fisheries and tree planting on U.S. Forest Service land.

In retrospect, Hickel got off easy.  Federal dollars for colleagues’ projects would vanish if they forgot Julia Butler Hansen’s birthday. She was around for a very long time, 21 years in the state House of Representatives, 14 years in Congress from 1961 to 1975, before coming home to join and then chair the Washington State Transportation Commission.

The Northwest did send women to Congress back then, four of them in 1960.  But identity politics was far in the future. That was an era when the yardstick was whether the girls were as tough as the boys.   Idaho Rep. Gracie Pfost entered and won an event at a loggers’ competition.  The prickly, feud-prone Rep. Edith Green was nicknamed the “Madame Nhu of Oregon politics,” after the infamous sister-in-law of South Vietnam’s President Diem.

Hughes offers a meticulous, balanced, always sympathetic account.  He points out the cultural side of Julia, as an historian and author, and her deep ties to the county seat of a tiny county tucked away in Southwest Washington.  She would cop money to create the first Washington State Library.

The biography gets dense at times, such as its account of the great late-1950’s battle over whether to build a cross-Puget Sound Bridge and where to put it.  The state would build other bridges, only to see the Hood Canal Bridge break apart in a 1979 storm and old sections of the Lake Washington Floating Bridge sink in 1990.

Washington state had real power in the “other” Washington during the 1960s and 1970s.  Straightlaced Sen. Henry Jackson and fun-loving Sen. Warren Magnuson both chaired powerful Senate committees.  Tom Foley was a rising figure in the House.  The tough-talking Hansen joined Appropriations in her second term.

If Hughes loads up legislative detail, he lightens up at other times.  Sen. Magnuson had been “dating” a “beautiful widow” named Jermaine Peralta for much of a decade.  Lyndon Johnson virtually commanded that they wed.  Julia Butler Hansen was among the 20 guests at the White House in 1964 as Maggie and Jermaine tied the knot.

Julia Butler Hansen won her 42nd consecutive election victory in 1972, a streak begun with a Cathlamet school board election.  She worked with a House tough guy, Rep. Phil Burton of California, to loosen up Democratic caucus rules.  One reform, secret-ballot elections of committee chairs, would elevate Tom Foley to chair of the House Agriculture Committee in 1975. He would later become House Speaker.

Hansen longed to come home to Cathlamet, and care for a retired logger husband 24 years her senior.  As well, she yearned for privacy.  On the night of Nixon’s Saturday Night Massacre, a rookie Seattle Post Intelligencer reporter – me – reached Hansen at home.  “Young man, I have a pie in the over:  Do you want my pie to burn?” she demanded. She got into it, however, creating the image of Nixon twisting in the wind, saying “We should not string this man up before a trial.”  What kind of trial?  “Well, I talked about that with Carl Albert and he told .me . . .” The House Judiciary Committee would soon take up the fate of Nixon. Albert was Speaker of the House and a Hansen buddy.

The pie must have been burned to a crisp. Hughes, at the Daily World, called Hansen soon after I reached her. She would blame “all these intrusive” nighttime calls as one reason she was retiring from Congress. The 3rd Congressional District, in Southwest Washington, has gone on to elect two other women to Congress, Reps. Linda Smith and Jaime Herrera Beutler, both conservative Republicans.

Hughes’ biography of Hansen will be published November 1. It is part of “Ahead of the Curve,” a book and exhibit identifying and celebrating notable Washington women, from those who secured voting rights for women a decade ahead of the 19th Amendment to those who have served as legislative and tribal leaders, Governor and in both Houses of Congress. “Ahead of the Curve” can be accessed online.