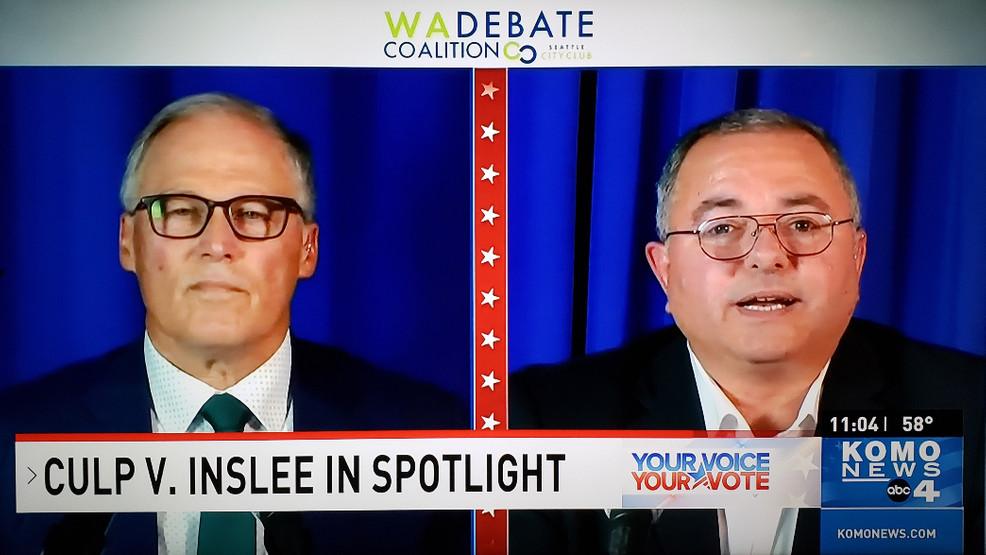 From Dan Evans to Loren Culp: How the GOP got Shut Out in Washington State

The Mainstream Republicans of Washington staged a “virtual gala” last week to honor ex-Gov. Dan Evans on his 95th birthday. Evans, the only Washington governor to win three consecutive terms, was feted in an evening of memories all the way back to the time when a 39-year-old reformer could win statewide office with the slogan “A Blueprint for Progress.”

But Evans left the governor’s office 44 years ago, and all those years since the governor’s mansion has been occupied by a Republican for just four years. The Evans’ legacy turned out to be mostly about memories, not further triumphs.

Democratic Gov. Jay Inslee is likely to equal Evans’ achievement on Nov. 3. Inslee is blanketing the airwaves with TV spots, far more than required to snuff out his GOP challenger, Republic, Wash., police chief (and only cop) Loren Culp.  The August 4 primary saw Inslee capture 510,157 votes or 68.49 percent in King County, to 39,707 or 5.33 percent for Culp.

Past Republican gubernatorial candidates, who have run and lost, figured they’d need 40 percent in King County to win, leaving Culp with an immense distance to travel. Culp did take 56 percent on his home turf of Ferry County, good for only 1,800 votes.

Washington has experienced the longest period of one-party gubernatorial rule in America.  We’ve not had a GOP governor since Booth Gardner ousted John Spellman in 1984, the same election in which Ronald Reagan was the last Republican presidential candidate to win the Evergreen State. During the long drought, the ballot has seen Republicans who would have made capable governors – Sid Morrison, Jim Waldo, Rob McKenna, and Bill Bryant – but mostly losers from the far right.

Evans and future U.S. Sen. Slade Gorton were once state legislators from adjoining north Seattle districts — ancient history.  King County has since become an impregnable Democratic fortress. Maria Cantwell used a 150,000-vote margin in the county to unseat Gorton in 2000.  By 2012, Inslee narrowly beat McKenna thanks to a 224,000 King County advantage.  The gap expanded to 350,000 votes in 2016, in Inslee’s win over Bryant.  The two candidates ran even in Washington’s other 38 counties.

Years in the wilderness have left Dan Evans hale and hearty at 95:  A hike with Dan and Nancy Evans, in the Olympic National Park’s Dan Evans Wilderness, was auctioned off on Thursday night.  For the Republican Party, however, years in the wilderness have resembled the Donner party. The party’s dominating conservative base has produced such outside-the-mainstream gubernatorial nominees as Ellen Craswell, Bob Williams, and John Carlson. Congressman Morrison and Jim Waldo, both attractive moderates, never made it past the primary.

Nor has the party, nationally or locally, done much to help.  The Republican Governors Association blew away almost $9 million in 2012 on cookie-cutter TV spots featuring paid actors.  When Chris Gregoire’s 129-vote 2004 victory over Dino Rossi went to a trial in Chelan County, the Republicans were outclassed in court by Jenny Durkan and Kevin Hamilton.  The Gregoire win was expanded to 133 votes.

Loren Culp is speaking for a movement: those who resist wearing masks and resent government.  In his words, “I’m not anti-mask, but I’m anti-governments who dictate to their citizens.”  But such voters are a distinct minority, mainly populating libertarian-minded corners of the state.   Culp-for-Governor signs are as ubiquitous in rural Washington as Inslee TV spots on Seattle television. He was being touted as a fighter against “big government” at the Naches Tavern earlier this month.

Chief Culp has refused to enforce I-1639, the gun-safety measure overwhelmingly passed in the 2018 election.  He is part of a national movement that believes local sheriffs, rather than courts, are proper arbiters of the Constitution. Culp is also a global warming denier, saying on a video:  “Well, in the ’70s – you know I’m old enough to remember – there was the big scare about global cooling.  It was on the national news . Global cooling, we’re all going to freeze to death. And then there was global warming, we’re all going to burn up. It’s always 10-12 years down the road.”

Why can’t the Republican Party do better than Loren Culp?.  The Mainstream Republicans put on a wonderful shindig for Dan Evans.  But the party’s base is, in an Inslee-coined word, “Trumpian.” Primary election efforts to promote a gubernatorial candidate with potential general election appeal – emergency room physician Raul Garcia – were last-minute and insufficient.

Other factors are in play, including:

Trump: The headwind is too great when your presidential candidate loses the state by half-a-million votes.  In Washington, more than most, a Republican candidate is whipsawed between the Trump following and Democrats’ ceaseless efforts to fasten every GOP hopeful to the 45th president. Bill Bryant repudiated Trump in 2016, as did GOP Senate hopeful Chris Vance.  They received little credit, endured much grief.

Democrats’ attacks:  The ruling party does not make challenges easy. In 2012, Rob McKenna endured trackers, ringers who accosted him on the street, and attacks from all sorts of interest groups.  McKenna’s initial foray into politics was to back farmland preservation. Bill Bryant’s Methow Valley home is a shrine to Theodore Roosevelt.  No matter. Washington Conservation Voters and the League of Conservation Voter are now embedded with the Democrats.

Heartland gone:  The Republicans once had a vote base in such Eastside bastions as the 41st 45th,and 48th Districts. Democrats have since captured the suburbs and exurbs.  They took the 45th District (and state Senate control) in 2017, unseated the last two 5th District legislators in 2018, and elected Kim Schrier as the Dems’ first-ever 8th District U.S. House member.

Far-right culture:  Attend a Lincoln Day dinner, and you’ll catch the flavor of today’s GOP.  Viable statewide candidates are warmup acts for right-wing radio talk show hosts.  Auctions of assault rifles have targeted the party. Masks have not been worn at party gatherings this year, with backers packed at close quarters.

Republicans, Democrats and Independents alike should regret the absence of a viable GOP choice.  The old Evans-Gorton wing of the GOP offered alternatives to what KING-TV pundit Don McGaffin accurately described as “the sleaze wing of the Democratic Party.” Sensible, moderate choices are needed again if wacko-bird Seattle Democrats appear on the statewide ballot..

Jay Inslee has his vulnerabilities.  A succession of Elway polls, prior to the COVID-19 pandemic, gave him a mediocre job-approval rating of just 40 percent.  The Governor’s campaign for the Democratic presidential nomination was a dry hole.  He pushed aside two A-rank successors – Attorney General Bob Ferguson and State Lands Commissioner Hilary Franz – to lay claim to an office that he wanted to vacate.

Inslee has acted decisively when the coronavirus began to claim its first victims here in Washington.  He has resisted pressure to reopen to which governors in other states have succumbed with disastrous results.

Still,  the Big Guy is bossy, does not hear out those who disagree with him, and is out-of-touch with regions of the state such as Southwest Washington.  (Cowlitz and Grays Harbor counties voted for Culp in August.) Inslee has presided over administrative fiascos (Western State Hospital) and been left to bluster at Boeing’s 787 move to South Carolina.

Inslee is also too close to the Democrats’ interest groups, particularly unions and greens.  He has endorsed a union-backed challenger to a moderate Democrat, state Sen. Mark Mullet, the first second Democrat ever to win in the 5th District. He has flipflopped to oppose two projects he originally supported, a liquified natural gas project in Tacoma and a methanol production facility in Kalama.  In both cases, the environmental lobby cheered while developers felt blindsided.

With Culp as the alternative, Inslee can coast behind the message caught on a 1940 Franklin Roosevelt campaign button: “Better a third termer than a third rater.”