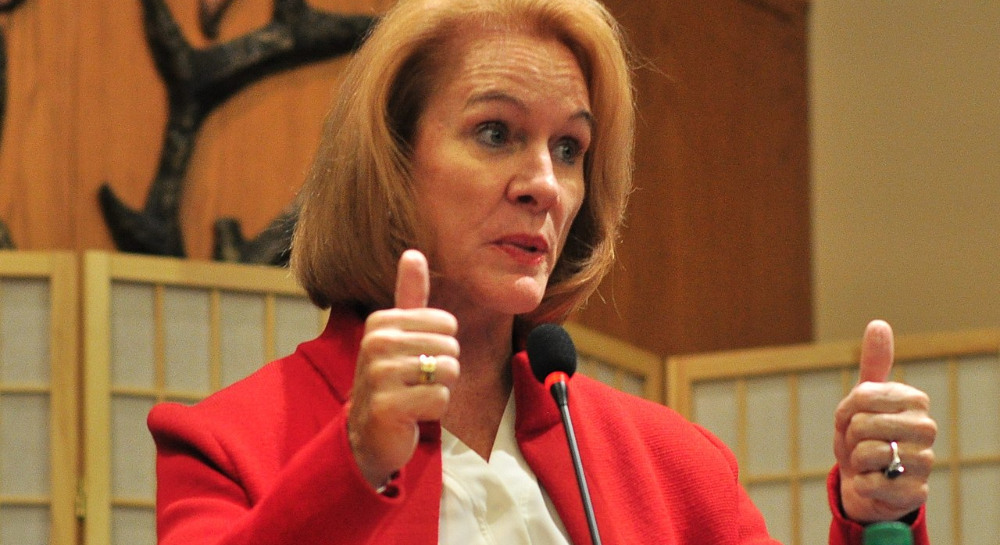 The Tough Get Going: Will Mayor Durkan Stand for Re-election?

When you see a fork in the road, Yogi Berra once advised, take it. Seattle Mayor Jenny Durkan is headed toward an intersection of life and ambition.

“Her Worship” is up for reelection next year, and the sledding will get rough.  She can seek a second term and face intractable opposition from the city’s hard left, which wants to recall her.  One left-activist Democrat, Robert Cruickshank of Demand Change, has even called her a “war criminal,” blaming her for the actions of Seattle Police.

Now 62 and a highly regarded attorney, Durkan has many other options. She can return to the practice of law, where as a trial lawyer she prevailed in the 2005 Chelan County recount case that secured Chris Gregoire’s election as Governor. Or Durkan could join a Biden administration, having served as U.S. Attorney for Western Washington during Obama’s first term. The baggage of post-George Floyd turmoil would likely follow her: One can close eyes and hear the shouting abuse from Tucker Carlson of Fox News.

The background to Jenny Durkan’s choices offers a distant mirror dating back a half-century, and might indicate how the Mayor will make her decision whether to seek a second term. She faces issues that once confronted her father, “Big Martin” Durkan as he planned a second run for Governor in 1972.

State Sen. Durkan was a powerful, pragmatic, no-nonsense Democrat.  When young daughter Jenny asked to get involved in his campaign, Big Martin told her: “You’ll have to work.”  He meant it, and daughter Jenny went on to develop a formidable work ethic, claiming to be working 18-hour days as Mayor.

As a State Senator, Martin Durkan voted against ratification of the federal equal rights amendment.  He would see two of his daughters, Jenny and Ryan, excel in the practice of law. A third, Kathy, worked for a time as an NBC News correspondent in Israel. In recollection of a high school classmate who traveled with Durkan in Europe, Jenny Durkan is remembered in words that could have described her father:  “Super independent, and rough and tumble . . . strong- willed and adventurous.”

Big Martin was a deal maker.  He ran the powerful Senate Ways and Means Committee in tandem with its ranking Republican, Sen. Frank Atwood of Bellingham.  Both were put in the category “Lords of the Senate” in an assessment by The Argus.  Post-Legislature, as a lobbyist, the elder Durkan took on clients ranging from Emerald Downs race track to the cigarette industry.

He had liberal problems, as does Jenny today.  The Montana-born Martin was an early champion of farm workers and a labor ally.  But the McCarthy-McGovern liberals distrusted his brokering style and that he didn’t talk their litmus-test language.  Young State Rep. Jim McDermott positioned himself to the left of Durkan in the 1972 gubernatorial race, riding a bicycle around the state and splitting the center-left Democratic vote.

The elder Durkan had a young, passionately liberal chief aide, Mike Lowry.  Lowry blamed liberals when Big Martin was upset by Al Rosellini in the 1972 Democratic primary, who went on to lose to Dan Evans in the general election.  Later that week, a well-lubricated Lowry showed up at McGovern-for-President headquarters looking to tell people off.

Lowry would connect with voters in an emotional way that eluded his boss, and Lowry went on to serve five terms in Congress and get elected Governor in 1992, when Jenny Durkan went to work as his legal counsel.  She quit less than a year later after press aide Susanne Allbright accused the governor of sexual harassment.

Jenny Durkan is very, uh, Irish.  She attended Forest Ridge, graduated from Notre Dame and spent two post-college years teaching and coaching girls basketball with the Jesuit Volunteer Corps in the Yukon Delta of Alaska.  She followed Big Martin into the University of Washington Law School.  Upon graduation, mother Lolly joked: “Finally, someone is going to pay you to argue.”

Early in her mayoral term, aides to Jenny Durkan characterized her as “the impatient mayor.” She has a limited inner circle, has no real ally on the city council, is a demanding boss, and has been faulted for micromanaging. Pragmatism and impatience carry a downside. Neither father nor daughter have ever shown patience with ideologues or a willingness to suffer fools. She can be abrupt. This scribe once asked Durkan, while she was U.S. Attorney, why no prosecutions stemmed from the implosion of Washington Mutual Bank, a major event of the Great Recession.  “Because the evidence was not there,” she replied.  I referenced a damning Senate report on out-of-control greed at “the friend of the family.”  “The evidence was not there,” Durkan repeated.

Toughness runs in the Durkan clan. On the night before she was due for a crucial cross-examination in Chelan County Superior Court, responding to Republicans’ challenge to Gregoire’s 129-vote victory, Durkan learned that her father had died.  Co-counsel Kevin Hamilton offered to handle her job. Durkan excused herself to take a walk.  She returned after a short time, and excelled in court the following day.  The Democrats won the case. Gregoire’s margin of victory was actually raised from 129 to 133 votes.

The Durkan Irish shows up in loyalty and long memory.  Big Martin once cut a TV spot for a Republican running for state Supreme Court – Dan Evans aide Jim Dolliver – putting down his opponent, former Democratic Senate colleague Fred Dore.  “I’ve worked with both men,” declared Sen. Durkan. Similarly, Jenny Durkan was quick to back then-Republican Dan Satterberg for King County Prosecutor.  Both had done pro bono criminal defense work early in their legal careers. Durkan once spoke of remembering the “clang” of doors closing at the Washington State Reformatory in Monroe.

As U.S. Attorney, Durkan worked closely with the Civil Rights division of the Justice Department and its chief Tom Perez (now Democratic Chairman) and set up a civil rights department in her own office. She has opposed the Trump Administration from the get-go, giving legal advice at Seattle Tacoma International Airport to those facing deportation under the Trump Muslim travel ban No. 1.

Such is the topsy-turvy world of Trump that, according to the New York Times, Attorney General William Barr has asked the Civil Rights division to consider whether Durkan can be prosecuted for allowing the Capitol Hill occupation zone in early summer.  Durkan reacted with fury.  “It is particularly egregious to try to use the civil rights laws to investigate, intimidate or deter those that are fighting for civil rights in our country,” she said.

“We pick our public servants and then we pick on them,” Adlai Stevenson once said, in words that serve to sum up Mayor Durkan’s current political fate. She has made liberal friends by her moves toward affordable housing (Fort Lawton and the city’s Mercer property), by pushing for two years free tuition for public high school grads, and won initial praise for handling of the pandemic crisis.  It all blew up after the Floyd murder and the ensuing street politics. The “Seattle Way” of lengthy talk and shaping compromise has come apart since the Floyd killing.

With Durkan, that has meant unpopularity and open conflict with the council. Not an easy time for Durkan, who has long guarded her privacy. Partner Dana Garvey has never shown enthusiasm for politics, another factor in the couple’s decision about seeking a second mayoral term.  That privacy makes sense, recalling the murder of federal prosecutor Thomas Wales, so addresses of present and former Justice Department prosecutors are not disclosed.

Garvey and the couple’s two teenage sons appeared in 2017 when Durkan announced her candidacy for Mayor at the Pacific Medical Center, where Martin Durkan once recovered from World War II injuries.  (He was an underwater demolitions specialist.) A few days later, lobbyist brother Jamie Durkan called SeattlePI.com with an urgent request:  Delete Garvey and the sons’ names from the photo caption.

The rage of the summer has now come home, when demonstrators marched on Durkan’s home, and were addressed by Socialist Seattle City Council member Kshama Sawant. Sawant claims that Durkan has “gone to war against Black Lives Matter” an example of the overblown rhetoric of Seattle in the summer of 2020.

The 2017 Durkan campaign cost more than $1 million, counting “independent” spending by the business community.  The Durkan reelection kitty today has raised only about $4,700, indicating her reluctance to signal her intentions for a second term.

Jenny Durkan remains a much-watched presence.  She has inherited Big Martin’s capacity for work.  She knows more about police and police reform issues than any member of the Seattle City Council will ever learn.  She has learned in court the skill of shaping details into lucid argument.

She is also formidable.  Big Martin had the habit of slowly removing his cigar and fixing an icy stare on a legislative colleague of lesser ability.  Jenny Durkan is tall – she tried out for basketball at Notre Dame – and can create a regal presence. She has found herself in a thankless job. Whether her family’s durable devotion to public service will prevail for another term is the big political question hovering over Seattle politics. Don’t ask.

Joel Connelly
I worked for Seattle Post-Intelligencer from 1973 until it ceased print publication in 2009, and SeattlePI.com from 2009 to 6/30/2020. During that time, I wrote about 9 presidential races, 11 Canadian and British Columbia elections‎, four doomed WPPSS nuclear plants, six Washington wilderness battles, creation of two national Monuments (Hanford Reach and San Juan Islands), a 104 million acre Alaska Lands Act, plus the Columbia Gorge National Scenic Area.
Previous article
Reinventing: Time to Reimagine Seattle Arts
Next article
How Green Is Our Transit?