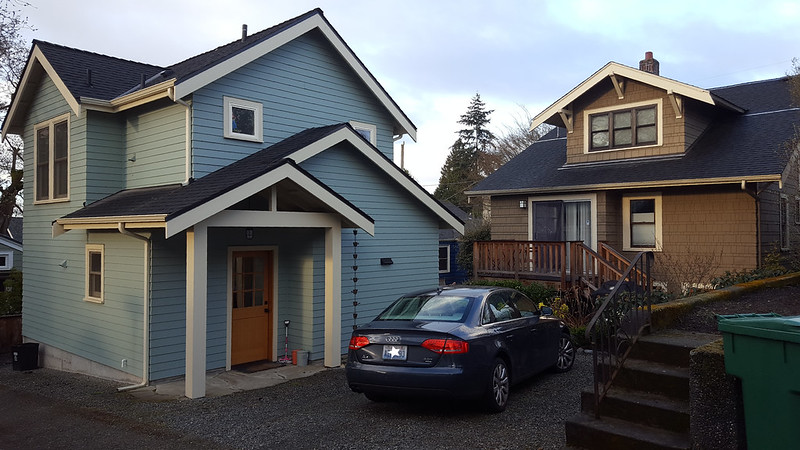 Aptly named Residential Infill Project (RIP), the package ends a long period of post-war ballooning of house sizes and off-street parking requirements.  These conditions have kept much of the city looking like a tired suburb. Despite similar development patterns, lots of bus transit and years of trying, Seattle has not been able to overcome similar legal obstacles from “neighborhood character” and objections from single-family homeowners.

Middle housing is very traditional but it’s so scarce in Western cities it’s misunderstood. Such modest housing ranges from low-rise multi-family to triplexes and accessory dwelling units (ADUs), attached and detached. If they are designed with landscapes and streets in mind, all those plexes and ADUs fit easily into traditional single-family lots and accommodate small households.

With its size limits, Portland’s package is a gift to all generations, from homeowners needing additional income to starter families looking for housing choices in the city. The new zoning in Portland will allow up to six small units on one typical 50-by-100-foot lot, as long as three of the new units are held to a standard of affordability and one or two are wheelchair accessible.

Just like Seattle, booming Portland needs denser housing along with transit. Towers are expensive, and theydon’t appeal to everyone. Many prefer stepping into their homes from the street, and they like diverse urban neighborhoods with lots of small, safe open spaces. That’s exactly what Portland’s new zoning will encourage, with lower limits on unit sizes and no on-site parking requirements.

Much lower size limits. As of last week, the maximum size for a new single-family dwelling in Portland is 2,500 square feet, down from a previous maximum of 6,750 square feet. Duplexes, triplexes and quadraplexes are not only allowed but encouraged, with total square footages of up to 3,500 square feet and unit sizes as small as 800 square feet. (These are not micro-units, which tend to be under 300 square feet.)

It could be transformative, at least over many years.  Single-family homeowners can add up to two accessory dwellings per lot: one 800-square-foot ADU and one detached unit (DADU) with an 800-square-foot size limit.  Cottage clusters, or groups of small detached dwellings, are fine. These should add to the supply of housing and the type of choices available in the Portland area. Four-to-six-plexes also carry requirements for affordability and accessibility in the changes.

It’s a big turnaround, and it’s worth watching.  Like Seattle and many young cities, most of Portland is zoned single-family and was built out in the form of suburbs with easy car commutes to the real city. That’s what WW II veterans wanted and the federal government subsidized with cheap loans and highways.

Today’s workers are different. They have shown a preference for living in urban neighborhoods and using transit, and they may not want mortgages. Yet Seattle has not adjusted, except in some token ways. The city still requires one on-site parking space per house, with the exception of accessory units in some single-family zones.

Other cities such as San Francisco, Minneapolis, Buffalo, and Hartford have managed to drop all requirements for off-street parking, according to Michael Andersen of Sightline.org. Because it participated in formulating the changes, the Seattle think tank takes some of the credit for writing and promoting the Portland legislation, calling it a “new standard.” Portland is unique in passing a package that allows units with much smaller square footages at the same time it dropped parking requirements, he said. (Parking can be built at owner discretion.)

Andersen expects some of the resulting units to be “naturally” affordable to people with modest incomes. Others may be subsidized in the usual ways. Some will be built by non-profits or local developers intent on affordable pricing—and the new zoning package will make it easier. At the same time, he expects the new regulations will generate revenue for parks and sidewalks, thanks to impact fees of $5,000-$14,000 per unit (based on a sliding scale). He hopes and expects Portland will see developers building efficiently, on more than one site simultaneously. Even so, Andersen expects it to be “a lifetime” before the effects of the package are truly visible.

The recent boom has given Seattle many downtown towers and five-story apartment blocks. Incremental redevelopment, with older buildings mixed in, has given us our best urban neighborhoods. That said, there is just not enough buildable land outside of single-family zones to meet the appetite for housing. Our middle housing can only be found in a few transitional or low-rise zones. Sites are hard to find, projects don’t pencil out to be affordable, and spec developers aren’t very interested. Off-street parking is a special problem.

In spite of all this, some Seattle architects and urban designers have made a specialty of middle range density in the heart of the city. The units are in demand, but they say zoning requirements are formidable—especially those for parking. Neighbors worry about traffic and crowding.

In Portland, the changes reverse post-war zoning, which was tinged by racism and migration fears. That old-style zoning restricted the numbers of living units, producing sprawl, and did not restrict size, producing mega-mansions. Over time, this kind of zoning resulted in some oversized houses that encroached on lot boundaries, according to Andersen.

Eli Spevak lives in Portland with his young family, in half of a duplex on a single-family lot.  He’s a developer, contractor and long-time advocate for middle housing, a term he and others have coined. As chair of the city’s planning and sustainability commission, Spevak helped formulate last week’s single-family code changes. He expects them to survive legal challenges, partly because they are supported by the state in separate legislation that reverses single-family zoning throughout Oregon. In addition, Portland had already dropped all parking requirements for all construction within 500 feet of a transit station, and that has been transformative, according to Spevak.

The package of changes will speed a trend toward more auxiliary housing units that began nearly a decade ago in Portland and has already transformed large parts of the city. These new units, mostly tailored to existing buildings and developed by individual homeowners according to Spevak, have been encouraged with tax breaks (in the form of reduced development fees). He estimates they’re built at a rate of about one per day. Garage conversions are popular. Many have been built by homeowners who never did anything larger than a kitchen remodel. Spevak concedes that the net reduction of allowable unit sizes may drive up prices of larger houses, but this would be a small price to pay for more choice among smaller units.  Short term rentals will be encouraged, not forbidden.

Some auxiliary units have been around long enough to prove they increase the value of single-family lots, in spite of single-family homeowner fears they would have the opposite effect. Traffic and parking have simply not been an issue, Spevak says, even in inner suburbs where they leave a single drivable lane.  ADUs have been embraced because of what they do for owners and their families—allowing younger generations to live in urban neighborhoods and older ones to age in place.

Similar zoning changes in Seattle have begun to transform parts of Green Lake, Ballard and Fremont. Capitol Hill has a large share of Seattle’s middle housing because of transitional streets with low-rise height limits. But Seattle’s parking requirements bring pressures on building envelopes that can result in much-maligned skinny houses.

A package of changes with similarities to Portland’s might help to solve our housing shortage and affordability crisis. It would also be liberating for developers, renters and buyers. In the future, Seattleites might not have to choose between driveways and lawns on the one hand and apartment towers on the other. They’ll have more in the middle.

Clair Enlow
Clair Enlow is a freelance journalist writing about architecture, planning and history. She’s a Loeb Fellow and an honorary member of AIASeattle.
Previous article
One Teacher’s Guide To Teaching: Get Out In The World
Next article
Remembering The Cool Intelligence Of Slade Gorton