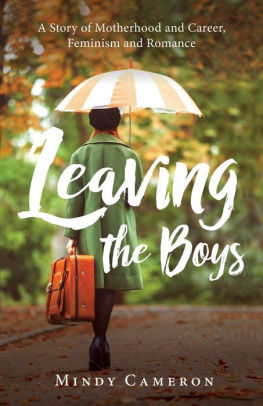 Mindy Cameron, former Seattle Times editorial page editor, and I have sometimes clashed, but,  past tilts aside, I enjoyed reading “Leaving the Boys,” her intensely personal memoir. Cameron’s autobiography tells the story of how she left her two young sons in the care of her divorced husband in Boise, Idaho.  Then she boarded a plane for Rochester, New York, choosing to follow a new love interest and a career in journalism.

After opening on that Christmas, 1976, scene of saying goodbye to her sons, Cameron takes readers back to her roots in a traditional family of seven sisters. An unplanned pregnancy during her final college year and a hasty marriage dictated her early choices. It wasn’t until her decision to work outside the home that she gained the confidence to pursue another life.

After retiring from the Seattle Times in 2001, Cameron enrolled in an MFA program in creative writing that helped her turn her memoir into a dramatic, if highly introspective, read. Although an accomplished journalist, she had to learn “to show not tell.” In a 177-page account, she details her intimate inner struggles and the uphill battles encountered in the days when sexism was a frequent insult and feminism was on the rise.

Reading her story, I gained a new appreciation for what Cameron accomplished in journalism, working in a handful of newsrooms, on public radio stations, and finally as the first woman to supervise the Seattle Times editorial pages. As a newsie myself, I appreciated her early struggles at the Times where she worked in a male-dominated atmosphere and answered to at least one unsympathetic editor.

As I noted, Mindy and I had some differences in the past. Most occurred when we worked for competing newspapers — she for the Seattle Times, me for the Post-Intelligencer. I recall an early encounter during a Seattle Times-P-I softball contest. At the time, I was the P-I’s business editor in search of reporter Bruce Ramsey. No matter that he was one of our dependable hitters, he was needed back at the paper to work on a story that would scoop the Times. Worst luck: Cameron, who then was Times’ city editor, was on the mound, pitching for her team, and I didn’t want to tip her off to the big story about SeaFirst that the suspiciously missing Ramsey was working on.

A more acrimonious clash occurred after I became a daily P-I columnist and was covering the battle to save the Blue Moon, Seattle’s most infamous tavern. Concerned that “the bulldozers were coming” for the historic watering hole, many of the city’s scribes, columnists Emmett Watson, Rick Anderson and myself included, were defending the tavern known for its history as a gathering place for poets, academics, counter-culture heroes and blue-collar regulars.

Cameron took an opposition view. Under the headline, “No need to mourn the loss of taverns,” she dismissed the Blue Moon as “another sleazy, smoky hangout.” She agreed with the need for casual gathering spaces, but argued that these are better found in shopping malls, health clubs, community centers and even McDonalds. She sneered: “A cultural oasis? Rubbish. It’s a dive.”

As a columnist, I speculated on what a post-demolition Blue Moon might look like: “A California style restaurant with ferns and $10 burgers and a trendy name. They’ll call it Mindy’s.”

The Forever Blue Moon movement rallied hundreds to its cause — even the New York Times’ Tim Egan and KIRO-TV conservative commentator John (“they’ll even serve me”) Carlson. But, alas, the crusaders lost their bid for historic preservation. Commissioners said that, while the Blue Moon’s outer shell met the age requirement, the tavern’s inner spaces, often remodeled, no longer met the “physical manifestation of significance.”

Still there was good news. Owners of the property bowed to sentiment and rejected demolition plans, saving the Blue Moon after all. During the victory euphoria, even Mindy felt compelled to write a contrite column, winding up with the lament, “Where’s the soul of the city going?”

Cameron’s unpopular stance on the Blue Moon luckily didn’t overshadow her mission to make the Seattle Times editorial pages something they hadn’t been: livelier. She even managed to shepherd through an endorsement for Michael Dukakis over then President Ronald Reagan.

Since retirement from the Seattle Times in 2001, Cameron and her lawyer husband Bill Berg have made their home on rural acreage near Sandpoint, Idaho. They’ve become an active part of the community. The couple organized the nonprofit Panhandle Alliance for Education, and Mindy was elected to the local school board serving for 11 years. Her memoir concludes with a wrap-up report on the lives and adventures of those two boys she once left behind.

Jean Godden
Jean Godden wrote columns first for the Seattle Post-Intelligencer and late for the Seattle Times. In 2002, she quit to run for City Council where she served for 12 years. Since then she published a book of city stories titled “Citizen Jean.” She is now co-host of The Bridge aired on community station KMGP at 101.1 FM. You can email tips and comments to Jean at jgodden@blarg.net.
Previous article
Success of US-Brokered Middle East Plan Depends on Dubious Expectations
Next article
One Teacher’s Guide To Teaching: Get Out In The World