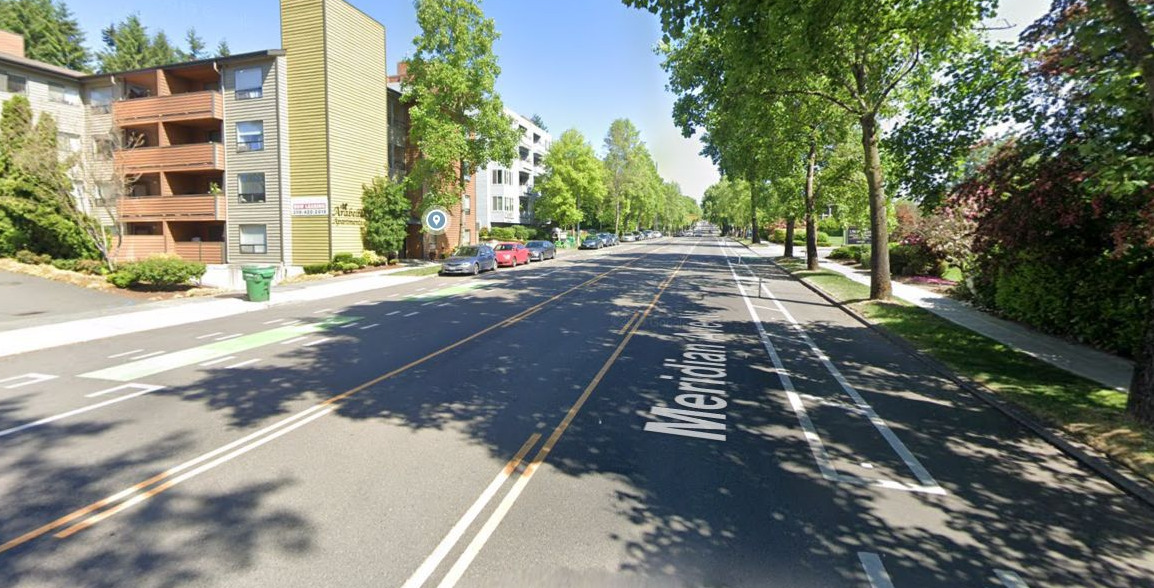 Meridian Avenue North is oddly named.  It heads due north from Lake Union to the King-Snohomish County line where it becomes 76th Avenue North until it falls into Puget Sound in north Edmonds.  The meridian it identifies, 120° 22’ North, seems an entirely arbitrary choice to have been used as a name.  All north-south streets follow meridians, so why choose this street?

It is one of those deep mysteries of Seattle history that drive people to distraction, but I think I know the answer.

I believe the street originally began at Green Lake where an Indian trail headed north and kept on a north compass heading all the way to Lake Ballinger on the county line.  Native Americans did not have compasses and their trails typically followed land contours, but the route proved useful to U. S. Army surveyors tasked with building a military road connecting Fort Steilacoom near Olympia to Fort Whatcom on Bellingham Bay.

This was around the time the U. S. and Great Britain threatened to go to war over an American pig murdered by a Hudson’s Bay Company man on San Juan Island.  Washington Territorial legislators had asked Congress to fund the military-road project.  In 1857 Congress approved, and work commenced.

It was to be 16 ½ feet wide (one rod—the length of the pole English farmers used to goose the ox in front of the plow to stay on furrow) and free of boulders and roots to a depth of nine inches.  Just the survey through intractable forest and wetland represented a major effort. The straight trail provided handy access to the interior between Puget Sound and Lake Washington.

One bit of evidence is the lay of Seattle’s hills, particularly those in the north end.  Drivers heading north or south navigate long, gentle grades, except for sharp drop-offs at the hills’ northern ends.  Drive east or west, however, and it is up and down all the way, a nightmare in a snow storm.  A bus ride from north to south is easy and quick, but to go east or west, better have transfer slips ready and lots of time.  It might not even be a bad idea to book a motel room for the night midway.

This is because Seattle’s hills are almost all drumlins, a Gaelic name for long, low hills streamlined by the moving overburden of an ice sheet during the ice age.  In Seattle, moving ice 3000+ feet thick left ridges of glacial sediments—till–about 100 feet high that go on for miles. The northern ends bucked the ice’s southward flow, causing it to slow and plaster glacial till on the hills’ noses, creating their steep faces.  Seattle’s drumlins are parallel and deviate but a few degrees from a north-south alignment, the direction of flow.

Native people managed salmon fisheries on Green Lake and Lake Ballinger, and collected cranberries in bogs at the Denny Swamp, Twin Ponds marsh, and Ronald Bog. Deer, elk and bear were hunted in woods burned over periodically to allow enough sunlight to reach the herbaceous understory.  Beaver, mink, marten and waterfowl were trapped and hunted in wetlands.

Native people spent the warm months from February to November traveling from camp to camp collecting and preserving food to last them from November to February in winter villages where they waited out inclement weather.  When they were out gathering, men, women and children spent days and weeks at distant camps, returning to the villages regularly to store what they gathered and check on the grandparents caring for the infants.  These camps were named, often after the resource gathered there.  Green Lake, Licton Springs, the Denny Swamp, Haller Lake, Bitter Lake and Lake Ballinger had native names.

Oak, Haller and Bitter lakes, a mile or more from the Sound, also had shell middens.  While women and children picked berries or dug roots, men hunted to supply camps with game, and brought clams up from the beaches to vary the diet.  Early pioneers Henry Allen Smith (editor of Seattle’s great speech) and Emily Inez Denny wrote that native people told them shellfish also suppled those who hid at the camps when northern slave raiders came south in their black war canoes.  One man, Lake John, said he remembered dodging arrows going to the beach to get clams.

By that we know that trails connected these camps to the beach.  The distance between camps at Licton Springs near Oak Lake, and Haller Lake–a little over a mile–is much less than that to the beach.  If gatherers planned a trip to several camps, it made more sense to go from one camp to another rather than backtrack to and from the beach.  So, a north-south trail makes sense, and this is underscored by the valley the camps occupied between drumlins that guided travelers unerringly north and south.  And it made sense for surveyors to use this unique trail to reach and supply work stations.  Because the military road was intended for horses and wheeled vehicles, it sought better drained high ground whereas the native trail kept closer to resource-rich water bodies, but the routes often crossed.

All of this raises more interesting questions: Who made the trail and how old is it?  When prehistoric Seattle was freed from the ice, Green Lake, Haller Lake, and Lake Ballinger emerged. They are “kettles” formed when masses of ice remained buried in till after the sheet melted back.  As these fragments melted, they left depressions that filled with water, becoming typically round lakes.

As vegetation returned to the raw landscape, grasses and shrubs grew on drier drumlins while tules, cattails and other thick-rooted plants flourished in the soggy, intervening valleys.  Ice age megafauna, in particular woolly mammoths (Mammuthus primigenius) and mastodons (Mammut americanum), grazed on these.  Mammoth molars, which look like washboards, evolved to process tough plants high in silica, like grasses and sedges, while knobby mammoth molars, like mortars and pestles, processed softer marsh plants.  Marshes give rise to peat bogs, and it is beneath layers of peat that mastodon skeletons are often found.

We can visualize these prehistoric creatures moving slowly and grandly along and among Seattle’s drumlins, and human hunters following them.  Not far away, just across Puget Sound at Sequim, is a documented mastodon kill site.  Which came first, the elephants or the hunters? The riddle poses another question: How the trail came into being some 12,000 years ago.

The next time you drive Meridian Avenue North and stop at a light, look up at the hills on either side and watch the mastodons pass — immense, lordly beasts with matted coats and fabulously curved tusks.  As you accelerate, watch out for the lumbering mastodons knocking brush aside with their straighter tusks as they root in the marsh.   And watch for the hunting bands: men and boys hefting spears, the women and children carrying baskets and digging sticks.

The great animals disappeared, hunted out possibly.  But the people remained and walked the same trails even as forests grew up around them obscuring the broad views.  The north-south valley guided them on their way.