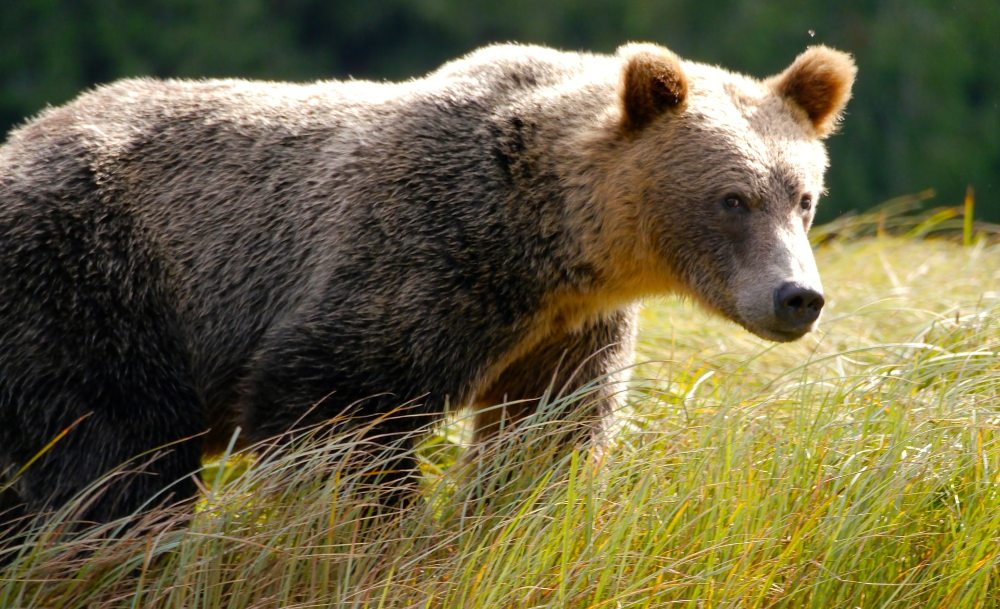 Good news if you’re a grizzly bear living in or near Yellowstone National Park: The 9th Circuit has mostly upheld a district court ruling that vacates the delisting of grizzlies in the Greater Yellowstone Ecosystem, making them once again a threatened species, and preventing nearby states from issuing licenses to grizzly bear trophy hunters.

Bad news if you’re a grizzly bear contemplating a move to the North Cascades: The Interior Department has gone back on its 2018 decision to move ahead with a process that would have brought new bears into the national park to jump-start recovery of grizzlies there. The U.S. Fish and Wildlife Service (FWS) and North Cascades National Park, both Interior agencies, had already issued a draft environmental impact statement (DEIS) for its North Cascades grizzly bear recovery plan, and were in theory working toward a final EIS.

But on July 7, at the Elks lodge in Omak, accompanied by Republican Congressman Dan Newhouse, who represents central Washington’s 4th District, and leaders of agricultural interest groups, Interior Secretary David Bernhardt announced that his department was simply scrapping the whole legally-prescribed process. The department announced that its agencies had “terminated the preparation of an Environmental Impact Statement (EIS) for a proposal to develop and implement a Grizzly Bear Restoration Plan for the North Cascades ecosystem.”

Is that the final word on grizzly bear recovery in the North Cascades? “Hell no,” says Joe Scott of Conservation Northwest (CNW), which has been working to restore the grizzly population for decades. “You tell me how this is good policy or governance.”

Once upon a time, the western United States south of Canada were crawling with grizzlies. Estimates of the grizzly population before non-native people started shooting, trapping and poisoning them go up to 50,000. By the time the Endangered Species Act (ESA) was passed in 1973, that number probably lingered in three figures. As the 9th Circuit majority recently observed, “the grizzly’s decline was a motivating force for passage of the original ESA.” Both iconic and clearly in trouble, grizzlies in the Lower 48 United States — there’s no lack of them in Alaska — were listed as threatened in 1975.

Seven years later, the U.S. Fish and Wildlife Service (FWS) came out with a grizzly bear recovery plan. The plan designated 6 recovery areas, places in which the bears lived historically and which had enough of the right kind of habitat for them to live there today. One was Yellowstone, where grizzlies had long been a tourist attraction; old photos show people feeding them from car windows, and tourists used to gather at dumps to watch them eat garbage. Another was the North Cascades. As far as anyone knew, there had been no grizzlies in the North Cascades since 1967, when one had been shot in what is now the national park, but the habitat was still there and most, including North Cascades National Park, was owned by the federal government.

There were rumors of Cascade bear sightings in the 80s, and the state started trying to prove that grizzlies actually lived in the North Cascades, but evidence was hard to come by until a couple of people photographed what were clearly grizzlies there in the 1990s. Since then, signs of the big bears have been scarce. No one has spotted one on this side of the Canadian border in more than a decade. There may be 20 bears in the Cascades. There may be two. At times, if you assume that they wander back and forth across the Canadian border, there may be none. But the habitat remains. The recovery plan calls for restoring a population in a place where bears can obviously live.

In 2016, 41 years after grizzlies were listed, the FWS and national park’s DEIS presented four alternatives: One was to do nothing. The three others called for bringing small numbers of bears in from other places. CNW favored one that would have brought in maybe 25 animals over 10 years. At that rate, getting to a population of 200 bears would take up to a century.

A Federal Register notice announcing that the DEIS was available for public comment was published a week before Trump’s inauguration. Bad timing. The Trump administration quickly halted the planning process. Then, in early 2018, Interior Secretary Ryan Zinke, on a visit to North Cascades National Park headquarters in Sedro Wooley, surprised virtually everyone by announcing that the government would bring grizzlies back to the North Cascades. This was the same Zinke who had worked to shave the dimensions of national monuments and weaken the Endangered Species Act. Environmentalists expected nothing from him. They were wrong. “We are moving forward with plans to restore the bear to the North Cascades,” Zinke said, stating that the EIS would be done by the end of the year.

“Cattlemen were incensed, stating they have already faced too much carnage from the return of the wolf to Washington,” Lynda Mapes reported in The Seattle Times. But Zinke — reviled among public-lands advocates and conservationists in Washington for everything from backing oil drilling off the coast to hiking national park fees — said he is convinced that park and wildlife professionals can ‘get it right,’ and deliver an environmental-impact statement and record of decision by the end of the year under which the federal government will return the grizzly bear to its primordial home in the North Cascades.”

But the EIS has not been completed. Nothing happened before Zinke left office at the end of the following year, beset by ethics investigations and suspicions of scandal.

Now, the Trump administration has simply stopped following the process. Which won’t keep it out of court. Indeed, the Center for Biological Diversity has already filed a notice of intent to sue the government over Bernhardt’s decision.

By ending the process, says Andrea Zaccardi, a senior attorney for the Center, “they’re essentially skirting their duties to conserve and recover grizzly bears.” She suggests it’s “unique to terminate a NEPA process in the middle.” And that “is not something they can do under the law.” Also, she says, “they’ve got a recovery plan that says they need to restore grizzly bears there. If they are going to reverse that, they need a scientific rationale.” But they have offered no rationale, and “the Endangered Species Act doesn’t let you ignore listed species.”

Actually, they have offered a kind of rationale. Just not a scientific one. “The people who live and work in north central Washington have made their voices clear that they do not want grizzly bears reintroduced into the North Cascades,” Bernhardt said.

“We do not want grizzly bears in North Central Washington,” Newhouse said (He was echoing a 1995 Washington law that said, “Grizzly bears shall not be transplanted or introduced into the state.”) “I have long advocated that local voices must be heard by the federal government on this issue, and I am enormously grateful to Secretary Bernhardt.”

The Interior Department press release announcing the policy decision said there was “overwhelming” public opposition. Really? “The statement that Secretary Bernhardt made is blatantly false,” Scott ways. If the department had issued a final EIS, he explains, all the comments and a statistical analysis of them would have been published. In the absence of that, CNW filed a Freedom of Information Act request to get the numbers. What the group found, Scott says, is that “there was not ‘overwhelming opposition.’ Support versus opposition was a ratio of 62 to one.” There were 126,000 comments on the draft EIS. One hundred nine thousand were positive, and 92,000 supported an action alternative that involved transporting bears. “How is that a majority being opposed?” Scott asks.

In contrast to the North Cascades, the Greater Yellowstone ecosystem has some 700 bears, more than any other recovery area except the Northern Continental Divide, which includes Glacier National Park and has 900. Right now, the Yellowstone bears are doing fine. Longer-term, scientists and activists have long expressed concern about their food supplies and gene pool.

Those 700 bears are isolated from other populations. Over time, inbreeding will endanger the population. A 2007 rule, stricken down by federal courts, that would have delisted Yellowstone grizzly bears identified this problem and suggested that if outside bears weren’t coming into the ecosystem by 2020, the government should start transporting them. The 2017 decision to delist the Yellowstone bears played down the long-term dangers of inbreeding; it no longer set a 2020 deadline, saying instead that if a lack of genetic diversity ever became a problem, then bringing in bears might be a last resort.

The 9th Circuit cited that as one reason for vacating the decision. The 9th noted that the lower court had “held the FWS acted contrary to the best available science when it determined that the Yellowstone grizzly bear was not threatened by a lack of genetic diversity, and that the translocation and connectivity assurances contained in the 2007 Rule were no longer necessary. . . because there were no concrete, enforceable mechanisms in place to ensure long-term genetic health of the Yellowstone grizzly, the district court correctly concluded that the 2017 Rule was arbitrary and capricious.”

If the relatively large Yellowstone population is vulnerable to inbreeding, a much smaller population of bears in the North Cascades -would be even more so. It, too, would require secure corridors or translocation virtually forever.

But unlike the Yellowstone bears, it will require corridors or transportation to even exist. The grizzly bear population in southern British Columbia has lost its connection to the much larger populations farther north in the province, and has become critically endangered. There just aren’t a lot of B.C. bears waiting to colonize this side of the border. And any bear that does want to head this way must swim the Fraser River and cross roads and railroad tracks to get here. A young male looking for new territory may do it. A female probably won’t. Young females don’t generally stray far from their mothers’ home territories. Waiting for females to migrate is a long game. And without females, there is obviously no chance of a naturally reproducing population.

There is no evidence of grizzly bear reproduction in the North Cascades. Ultimately, creating corridors through which bears can move to and from the North Cascades makes sense. Scott notes that Conservation Northwest has been working to forge such connections since its founding. But it’s a long, long process, and Scott says he doesn’t expect to see it come to fruition in his own professional life. Short term, either someone hauls bears into the North Cascades or they don’t get here. The Interior Department has just basically decided that having no bears would be just fine. People have been fighting over this for decades, though. The Trump administration, too, shall pass. Scott is right: Bernhardt’s announcement won’t be the last word.