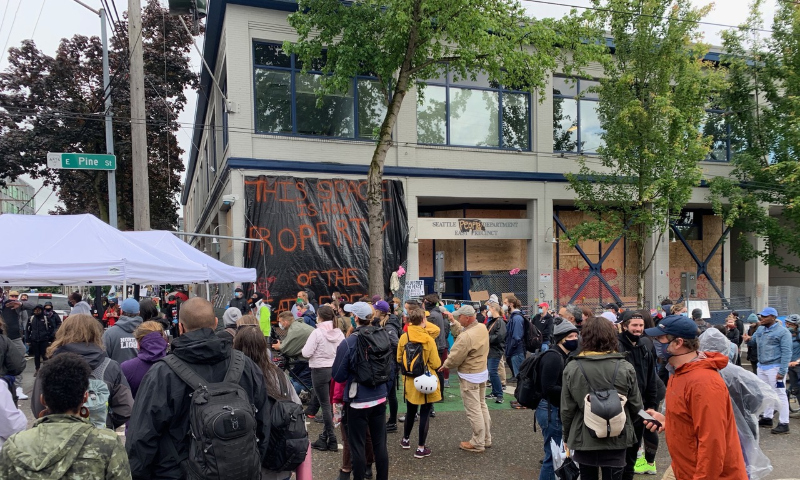 Seattle has a new landmark at the intersection of 12th Avenue and East Pine Street, the de facto center of an occupied zone currently called CHOP, for Capitol Hill Organized (or Occupied) Protest. The new status of East Precinct is sudden, unplanned and unofficial.

The sign over the door now reads Seattle Police People’s Department. Following days of protest after George Floyd was murdered by a Minneapolis police officer, and negotiations with Mayor Jenny Durkan, the Seattle Police Department vacated the first floor of the East Precinct in what it called a “gesture of trust.” Some officers continued to work on the second floor after the closure, while the boarded and graffiti-emblazoned walls became a backdrop for speeches on national news.

Then things got ugly. On Fox News, photos were digitally altered to make the neighborhood look like an apocalyptic movie set. The Seattle Times outed the crime but not everyone caught it.  By the end of the week people in Texas were wondering if Seattle is seceding. The president has tweeted that he would like to send in the National Guard. I can’t change his channel. He may sincerely believe we’re in danger when he calls the demonstrators on Capitol Hill “ugly.” I decided to see for myself, so I walked up there last Friday, five days after East Precinct was vacated.

Protesters seemed prepared to stay at it until there are changes at the city level. Concrete barriers at the boundaries of the occupation zone served as temporary markers and barricades, keeping cars out and protecting peaceful protesters. Greeters shouting from atop the barriers welcomed everyone except “bad demonstrators.” Perhaps they mean window-smashing anarchists as well as crowd-ramming cars and gun-toting vigilantes, because they’ve been visiting, too.

There was a small sign painted on the street proclaiming the Republic of Capitol Hill, in addition to the block-long Black Lives Matter lettering. Volunteers were signing up to patrol during protest events and keep watch through the night. Community gardens were planted. Tents were pitched on sidewalks and well-arranged sofas blocked a street. Trash was accumulating, but all in all it was clear that safety and security were on the occupiers’ minds.  The only thing that would clearly break the peace and spark terror is militarized force from outside the neighborhood.

And I’d like concerned people everywhere to know that the demonstrators I encountered there are not ugly. They’re angry. They’re mad at police for routinely humiliating and sometimes murdering black people with impunity. And so far, they’ve managed to maintain focus on the shrinking occupied area and on local and national policing.

It’s not just about racial bias. For instance, how are police officers supposed to respond to a non-violent mental health crisis when their training and skills are in the use of force? How can they de-escalate conflict and emotions if they don’t know anything about the community they are serving?

And police probably need a little time out.  While the housed population shelters in place, the police have continued to act as de-facto managers for a growing population without a home, sometimes alone. There are people with better training for that.

Our new landmark is not architecturally significant. Since it was purchased by the city of Seattle in the 1980s, it has been substantially altered. The two-story, remodeled 1920s masonry building at 1519 12th Avenue was designed by Victor Voorhees and built in 1917 as a post WWI auto showroom. It fits easily into Capitol Hill’s old brick “auto row” retail area, and the large corner entrance connects it to the now well-known intersection.

For some demonstrators, the building is their police station. The East Precinct serves a large area in South Seattle. I hate to see that open door boarded up. Like others who’ve raised teenagers here, I’ve been to the precinct in the middle of the night. But my sons are white. Not all of my former neighbors have good memories. I understand them better after recent weeks, but I hope the building reopens soon. Such valuable city-owned real estate should not be mothballed.

Eventually the city must step up. As of last week, it had already tried replacing the barriers at the boundary of the occupied zone with planter boxes, but backed away when protesters vehemently objected.  Pressure had been building for service and emergency vehicles to get through when some barriers were moved to accommodate. Next there will be cleanup teams, and eventually a redesign.

If the city continues using the building as a police station, I hope it can house other services, like counseling and referral or education and training. The free food collected by the occupiers might move inside to a new food bank. Or it could simply be a center for reinvented policing that responds to the concerns that protesters in Seattle and across the country have raised.  It might be a model for a nation in need of leadership.

If protesters want the city to defund the police department, they might go on to take on the challenge of affordable housing. Now that they are not trying to keep up with a glut of design work, the many architects who live or practice on Capitol Hill might try designing temporary housing alternatives.

In the meantime, the occupied zone is changed, probably for the better. I found that the murals painted on the street inside the Black Lives Matter lettering are pretty good. The new street paintings will look right at home with the existing rainbow stripes at Capitol Hill intersections. Some curated graffiti could remain on walls, too. If it sticks, CHOP will become the name of a pedestrians-only zone. It’s likely to include Seattle’s very own mews or mid-block courtyard, Chophouse Row, with entry at 1424 11th Avenue.

Over the long term, there might be a place for an urban land trust, a revival of a 1990s Capitol Hill initiative modeled on existing experiments like our Mountains to Sound Greenway Trust that protects forests from logging along Interstate-90. If that trust brings in more affordable housing, it might allow more professional policemen and women or community security volunteers to live in the neighborhood, along with other essential workers.

I look forward to real solutions to the problems the protesters are pointing to. I hope the precinct will live on as an even more walkable neighborhood, with lots of art on the street, and security and justice for all. And if the city renames the East Precinct Building “Seattle People’s Department,” so much the better.

Clair Enlow
Clair Enlow is a freelance journalist writing about architecture, planning and history. She’s a Loeb Fellow and an honorary member of AIASeattle.
Previous article
“But what happens next?”
Next article
How The Once-Powerful State GOP Blew Its Chance To Elect a Governor