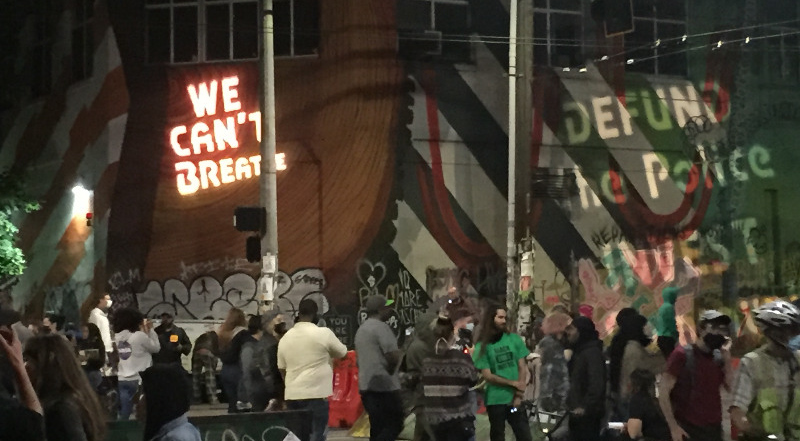 “But what happens next?”

We’ve all seen and heard variations on that anguished question in the last few weeks. It’s almost always accompanied with another question: “Who is it leading these protests?” “Who’s in charge of CHAZ/CHOP?”

I think I’m in a position to provide authoritative answers for both, though I don’t expect anyone to believe me who hasn’t spent an appreciable portion of their lives taking part in the more or less peaceful practice of people-power. (CV available on request.)

First: what happens next in our First Hill Demilitarized Zone? The same thing that happens whenever angry disenfranchised people find themselves in de facto control of a chunk of formerly private or government property: they celebrate, hoot, holler, light trash bonfires, maybe tear down a fence or barricade. (see the Flint, MI Sit-Down Strike, December 1936, People’s Park, Berkeley, CA , May 1969, The Park Blocks, Portland OR, May 1970, etc.)

Next, some of the more fervent (or with nothing better to do) hang out to deter civil society from re-imposing its rule. A tacit code of conduct emerges with respect to basics like sanitation. Some kind of perimeter defense is set up.

With direct confrontation temporarily on hold, thought turns to articulating a message to the rest of the world. Posters, banners, fliers get made. These days, some kind of accommodation for the press is set up.

If the weather continues fine, the site of protest often turns into something more like a 24-hour block party. These social-media days, visiting sympathizers (and googlers with cell-phones) soon outnumber the founding population.

What happens next depends entirely on the civil authority. If it counter-attacks, the site becomes a disputed border area where virtually anything can happen—looting, arson, grievous bodily harm—anything but a return to normal.

If authority stays its clumsy hand, the flower festival blooms, fades, goes to seed. Activists and the media move on, lollygaggers and groupies remain, and sooner of later, the street-sweepers move in and erase the evidence that anything untoward has occurred.

This can make an engaged onlooker feel melancholy. An overnight garden watered by a burst of human energy has dried up, leaving no trace. But after a few decades of recurrent exposure to the phenomenon, regret is replaced by quiet satisfaction. The water of life hasn’t vanished; it’s just seeped deep out of sight to nourish the roots of resistance. It will well up again when it’s needed.

Notice that most of the actions I mentioned above don’t have nouns as subjects. That’s what bugs people with no personal experience of rebellion in action: even if they approve in principle with what’s happening, they can’t find a label for what they’re up against. But they’re sure that someone is pulling the levers behind that curtain, and it drives them wild not knowing who it is.

After all: if you can’t put a name to your unknown friends/enemies, how can you curse them, mollify them, legislate against them, co-opt them, hit them on the head? Society must needs be a stack of layers, with each one controlling the one beneath. The notion that action—purposful, articulate, creative action—can occur without nameable agency gives rise to vertigo. And often to violence.

Berthold Brecht was a great poet, and a great rebel, but he was also enough of an authoritarian to write (I paraphrase)

“When the State acts correctly
the people say
’We did it ourselves.’”

I would revise the last lines to read:

Roger Downey
Born in Canada moved to Peru's altiplano at the age of six; came to the U.S. at 10 to discover that you don't use your feet to dribble the ball. Learned from the git-go that "America" is an idea, not a place.
Previous article
Sin and the Nature of Structural Racism
Next article
East Precinct, Seattle’s Unexpected Landmark