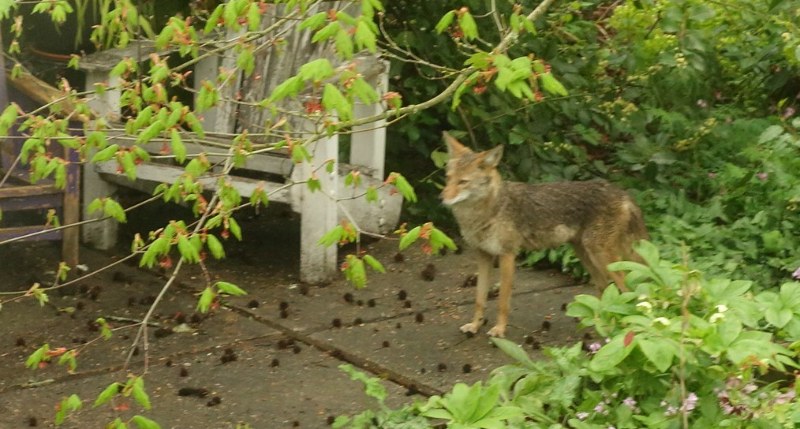 Wild Side: The Animal World Revealed when we Sheltered in Place.

A lactating coyote lolled out back, looking like she’d just stepped off a Romulus and Remus statue. A raccoon perched like a gargoyle on the corner of my roof, giving me a “What are you doing here?” look. Rabbits hopped blithely around the yard and even the street, just five miles from downtown Seattle. Unmowed, the scraggly grass in city parks has erupted into lush meadows. And then there’s the birdsong–from warbler trills to the Steller jays’ dinosaur squawks, joyously raucous, unadulterated by jet roar, traffic rumble, or other human noise beyond the occasional mower or leafblower.

These are the memories I’ll hold of this town under lockdown. You’ll have your recollections too, I’m sure. Around the world, tracking the photographing the return of the wild has become a favorite stay-home sport and pandemic consolation. The sightings range from sika deer in Nara, Japan and even more than usually emboldened monkeys in New Delhi to a puma in Santiago, lions lolling on South African streets, a peacock wandering Dubai, and, most celebrated of all, what the Brits call “mountain goats” occupying a beach town in Wales.

Good thing the lockdown didn’t come in November and December, when this city’s damp, dark, short days are enough in themselves to induce cabin fever. Instead we’ve been stuck at home at the perfect time to be stuck at home, smelling the flowers and pretending to work while watching the birds flit and jostle at the feeders outside our windows. It’s the mating (a.k.a. the nesting and the blooming) season, when everything from house finches and hydrangea to cavorting rabbits is putting on a show—flashing colors and trilling arpeggios in order to pass on their genes. Our lockdown is their liberation.

“I do think people are noticing birds more,” said John Marzluff, the UW ornithologist and crow whisperer, who wrote a book about our teeming backyard “Subirbia,” when I asked what he’d observed lately about humans observing nature.“But more than anything, people are noticing the nesting season more. Birds are collecting nest material, migrants are in, birds are feeding young, young are fledging, males are singing. Add to that, people are bored out of their minds. They want to stretch and get outside. It’s the singing season and we are finally listening.”

For the moment, anyway. Already the screeching horns and sirens, the roaring, rumbling, and rattling motors of our numberless machines are revving up again and drowning out the birdsong. The rooftop raccoon and nonchalant coyote seem to have retreated to their daytime hideaways and resumed their nighttime rambling. I started to write this as a celebration and wound up writing an elegy.

Someday, those of us fortunate and, I admit with more than a twinge of guilt, privileged enough to get through this unscathed may look back fondly on the weeks when we ceded our environs to the wild neighbors who ordinarily yield to us. It may seem complacent and self-indulgent to dwell on such delights while thousands are marching, chanting, and risking teargas and Covid-19 to protest racism and police violence. But wild nature can provide healing relief from the abrasions and injustices of American life, as Christian Cooper surely knows well. It’s somehow fitting that our current cycle of outrage didn’t begin with George Floyd’s death. It began when a black birdwatcher asked a white woman not to let her unleashed dog trample protected habitat in Central Park and she tried to sic the police on him for “threatening my life.”

There’s a common thread of solipsism, racial paranoia and entitled presumption running from her misplaced hysteria to Derek Chauvin’s slow-motion suffocation of Big Floyd. And a thread that runs from our neglect and mistreatment of nonhuman creatures to our neglect and mistreatment of humans when we see them as less than fully human. For a brief, forced interlude, that first sort of neglect has eased a bit, and we’ve gotten a whisper and a glimpse of what the world can be when we live more lightly in it.

Eric Scigliano
Eric Scigliano has written on varied environmental, cultural and political subjects for many local and national publications. His books include Puget Sound: Sea Between the Mountains, Love War and Circuses (Seeing the Elephant), Michelangelo’s Mountain, Flotsametrics and the Floating World (with Curtis Ebbesmeyer), The Wild Edge, and, newly published, The Big Thaw: Ancient Carbon and a Race to Save the Planet.
Previous article
Fantasies: The Purpose of Crowded Starbucks Stores
Next article
Elsewhere: Letter from the LA Protests