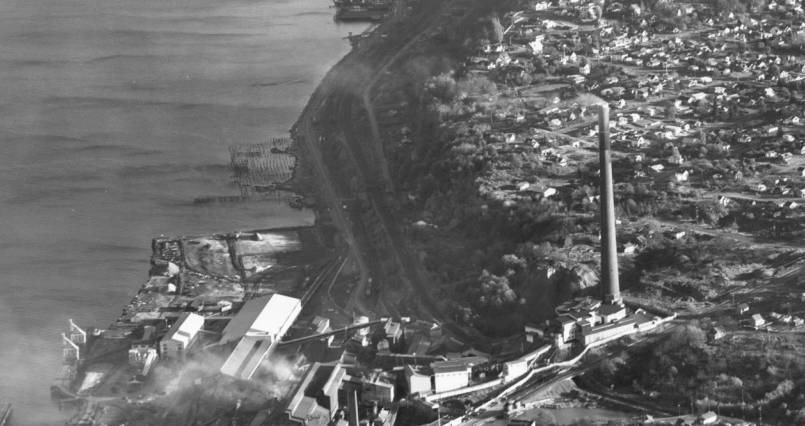 COVID Debate on Lives Versus Jobs: Tacoma Remembers this One

In the film noir classic, “The Third Man,” Orson Welles and Joseph Cotten stand at the top of a huge Ferris wheel, looking down at the tiny forms of Viennese citizens walking far below. Welles asks Cotten, “Would you feel any pity if one of those dots stopped moving forever? If I offered you $20,000 for every dot that stopped, would you really, old man, tell me to keep my money?”

President Donald Trump and others who push for a quick economic re-opening are basically saying hell no, give us the money. That may be appalling, but there’s nothing at all novel about trading human lives or jobs for profits or power. There’s one illustration right nearby.

A classic example is the 1911 Triangle Fire, the New York garment factory blaze during which Jewish and Italian immigrant working women and girls (some were only 16) threw themselves from 9th-floor windows to escape the flames, and some 146 people died.  Sprinkler systems were on the market then, but the factory owners hadn’t shelled out money to install them.  There were exit doors, but the owners hadn’t wanted anyone sneaking out with finished garments, so some of the exits were locked.

Or take the notorious Ford Pinto, manufactured in the 1970s with a gas tank vulnerable to explosive rear-end collisions. Ford deliberately failed to make these cars less vulnerable because the company figured defending the occasional lawsuit would be cheaper.

But those were private, behind-the-scenes calculations that balanced risk against profits, not jobs, calculations that no one wanted or expected to see the light of day.  They were not overt matters of public policy.

Which brings me to the notorious example close at hand, 30-odd years ago in Tacoma or, more exactly, Ruston, between Old Town Tacoma and Pt. Defiance Park. It must be hard for someone new to the region to drive along the Ruston waterfront past the new condos and shops, the wide roundabouts, the attractive new Dune Peninsula park, and picture the dystopian collection of old industrial buildings, the carloads of molten slag being dumped directly into Commencement Bay, the plume of arsenic-laden smoke drifting out across the water, the narrow, crooked, darkly-dripping tunnel through which one drove to the waterfront from Point Defiance, the 562-foot brick smokestack that rose above it all.

That was the scene around the smelter — which originally produced lead and then, for most of its existence, produced copper — that operated there from the presidency of Benjamin Harrison to that of Ronald Reagan.

In the late 1960s, when the nation was just waking up to environmental issues, the smelter was identified as Washington’s largest single source of sulfur dioxide.  People who grew up near the smokestack remembered days on which the SO2 in the smelter plume combined with moisture in the air to form sulfuric acid, which precipitated down into the neighborhoods and burned people’s shrubbery — followed shortly by the arrival of the “smelter man,” who went to people’s doors and paid cash for their damaged vegetation.

By the 1980s, the sulfur output had been reduced somewhat, although the company had gotten variances that shielded it from the reductions that had actually been ordered. The smelter was still Washington’s leading source of SO2, but the main issue had long since become the plant’s emission of arsenic.

The smelter, old and inefficient, stayed in business because it occupied a niche: it refined high-arsenic ores from the Philippines.  The main product remained copper, but a lot of the company’s profit came from gold and other impurities found with the copper.  A lot of arsenic wafted out through the tall smokestack, coming to rest in nearby yards and not-so-nearby school playgrounds.

The Environmental Protection Agency, which had just established a national arsenic standard, ordered the smelter’s owner, the American Smelting and Refining Company (ASARCO) , to install “secondary hooding” that would sharply reduce the amount of arsenic discharged into the air.  ASARCO said it was willing.  But if the EPA demanded it reduce arsenic emissions even more — by, say, smelting different ore or converting to an electrical smelting process — the Ruston plant would simply shut down, eliminating 575 jobs. Some people figured it would soon shut down anyway.

The EPA calculated that arsenic discharged from the smelter was causing up to four lung cancer deaths a year.  With hooding, it would still cause up to one extra cancer death a year.  On the other hand, the smelter management pointed out, if the plant was forced to close, it would eliminate 575 jobs.  One life a year — or four — for 575 jobs: that was the policy choice.

The EPA presented that choice at public meetings in the Tacoma area.  The agency’s head was Bill Ruckelshaus, the distinguished public servant who died in Seattle last year and was the EPA’s very first administrator.  He later became assistant attorney general, and  after the regular attorney general, Elliot Richardson, was fired by President Richard Nixon for refusing to fire the special prosecutor who was investigating the Watergate scandal, Ruckelshaus was given the assignment. When Ruckelshaus refused, he too was fired.  He was a genuine political hero.   In the 1980s, after the EPA’s reputation had sunk to an all-time low under the leadership of Anne  Gorsuch  — mother of Supreme Court Justice Neil Gorsuch — President Reagan asked Ruckelshaus to take the job again.

Ruckelshaus’ EPA held a public hearing in Tacoma and a pre-hearing informational meeting on Vashon Island, where a lot of the arsenic ended up.  The New York Times slammed him in an editorial, saying Ruckelshaus was acting like a Roman emperor, asking the crowd to turn thumbs up or thumbs down on a fallen gladiator.  Ruckelshaus was ticked at the time, and still ticked decades later.  He wasn’t asking anyone else to make the decision, he said. He would make it.  Rather than asking the spectators to turn thumbs up or thumbs down, he was basically asking the gladiators what they thought. (I was living on Vashon Island then, and went to the meeting.)

As it happened, no one ever had to choose between smelter deaths and smelter jobs.  The Ruston plant shut down anyway.  ASARCO, of course, blamed environmental regulation, but most observers blamed simple economics.  The U.S. copper industry had fallen on hard times.  Other smelters had already closed.  The Philippines had opened a smelter of its own. There was no longer a need to ship high-arsenic copper ore all the way across the Pacific. The old smelter had simply reached the end of the road.  Eight years later, a crowd estimated at 70,000 people watched as the tall brick smokestack was imploded.

What distinguishes the smelter saga from the current debate are today’s much larger numbers, the complexity of the current calculations, and the openness of Ruckelshaus’s approach.

The EPA and ASARCO disagreed about how much arsenic was going out the chimney, and about whether or not any exposure to airborne arsenic was really safe.  But if you assumed the EPA was basically right, the question was at least as clear as the choices faced now: Should society accept one annual human sacrifice for 575 jobs?

The smelter meetings drew lots of people and lots of heat.  But they didn’t exhibit the tribalism of current pandemic lockdowns.   It’s hard to sort out the messages being conveyed by some of the people who demonstrate against the lockdowns with Trump hats and with weapons.  Obviously, they want the lockdowns to end, but what else are they saying?  Don’t let Anthony Fauci take away our guns?  My freedom is worth more than your grandma?

Still, the demonstrators aren’t entirely wrong about re-opening. All 50 states have started moving in that direction.  They have to.  The lockdowns are eroding.  A lot of people have had enough  It’s time to shift, very cautiously, into reverse. so that state and local governments can at least manage the re-opening. The practical  question is how fast all that should happen.

You don’t have to share Trump’s zeal to rush the process, to ignore guidelines, and to dismiss the probable costs to acknowledge that people do need jobs, the money, social contacts, and the sense of purpose that jobs provide.  Communities do need to keep the small businesses that are going, going, to retain their texture — indeed, in order to remain communities.

And yet, do Trump and his enablers really care about such things? Do they care more about the Dow, capital gains, campaign talking points? They seem to be “leaders” who look down on the “little people,” rather like Welles and Cotten looking down on those “dots” in Vienna.  Would they “feel any pity if one of those dots stopped moving forever? . . . really?”

Faced with Welles’ proposition, they’d probably take the money and run. While congratulating themselves for being winners.

Dan Chasan
Previous article
Quantifying Our California Connection
Next article
How to fight racism and anti-black violence? Another reading list