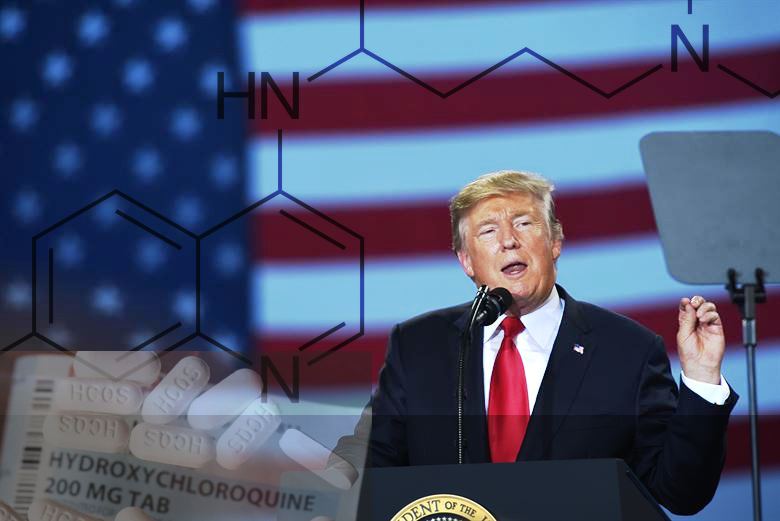 Why Trump’s All in on Chloroquine

This month President Donald Trump boldly continued to promote the antimalarial drug hydroxychloroquine as a protection against being infected by Covid-19. In a seemingly off-handed comment during a briefing, Trump said he was taking it himself, although the size of the dosage was not mentioned. At the same time, a new study of 96,000 coronavirus patients on six continents taking the drug concluded that they experienced a 34 percent increase in risk of mortality and a 137 percent increased risk of a serious heart arrhythmias. Those findings would seem to answer Trump’s question of “What do you have to lose?” in encouraging people to take the drug.

The media, with CNN often in the lead, have kept hammering away at Trump’s apparent ignorance or hubris or just stubbornness in pushing the consumption of hydroxychloroquine as a possible way of stopping the pandemic. Their primarily liberal audience probably reacts with disgust at having such an irresponsible president leading innocent but desperate and frightened Americans down a path toward a measurable risk of heart problems or death. Liberals likely expect that it could only damage his chances for being reelected.

Here’s why hydroxychloroquine is not a risk for Trump. Promoting a potentially harmful drug for treating Covid-19 is not moving the political needle. No number of experts testifying on CNN or MSNBC against the use of this drug will alter the mindset of Republicans as a whole. Surveys show they continue doggedly to trust Trump’s handling of the pandemic.

For instance, the number of coronavirus infections have exploded from early March, when Trump disbanded the Directorate for Global Health Security and at the same time declared a national emergency around the coronavirus. The number of confirmed infections soared from 29 on March 4 to over 26,000 on May 4 according to the University of Washington’s IHME. Nevertheless, Republicans remain far less concerned with the coronavirus than Democrats or Independents. According to the NPR/PBS NewsHour/Marist Poll taken on March 12–13, 2020, 60% of Republicans did not believe coronavirus was a real threat, while 50% of Independents did. Two months later in late May, 82.2 % of Republicans approved of Trump’s handling of the pandemic while only 12.5 % of Democrats did, according to a poll by FiveThirtyEight.

The pandemic could also hurt the Democrat vote more than the Republican vote in this November’s elections. Black and Hispanic populations account for a higher share of confirmed cases and deaths compared to their share of the total population, according to a mid-April analysis from Kaiser Family Foundation. It also found adults with low incomes are more likely to have higher rates of chronic conditions compared to adults with high incomes, which could increase their risk of serious illness if infected with coronavirus. These populations are the most likely to be harmed by taking hydroxychloroquine because of the greater likelihood of complications coming from their well-documented poor health conditions. They also overwhelmingly vote for Democrats

The percentage of validated 2016 voters in these three groups reported voting as follows: Blacks 91% for Clinton, 6% for Trump; Hispanics 66% for Clinton, 28% for Trump; people making less than $30,000 a year 53% for Clinton, 41% for Trump. Since they are not part of Trump’s voting base, any complaints about their illnesses or deaths from using hydroxychloroquine will not likely result in the administration’s quickly responding or even publicly acknowledging it.

Most importantly, Trump’s promoting hydroxychloroquine shows that he can buck the health experts who he strongly implies are providing foolish, overprotective restrictions that are putting people out of work and out of business. He does not point to infection charts and lecture about the dangers of getting back to normal life. Instead he comes across as just using common sense to promote a tried-and-true drug to give Americans a chance to get over this pandemic. He is says I’m taking it, and I’m doing fine. Try it! His attitude of being bold and going forward has him applauding protestors in Michigan who want their restrictions lifted by tweeting “Liberate” Michigan.

Trump understands that culture has far more influence than data in swaying the populace: how people perceive the pandemic determines their behavior more than what they know about it. He frames the pandemic as a cultural war between the mask-wearing elites and the people, not a dry discussion of the facts lead by academics. Remember Trump was a very successful producer of a popular TV realty show. He knows what grabs people’s attention. It is not tables with numbers on it. Thus, he promotes an unproven drug and refuses to wear a face mask. Not wearing one communicates that he is with those who want to move on and not dwell on the minutiae of health statistics.

Those statistics may actually work in his favor. While the death count has now exceeded 100,000 and the infection rate climbs over 1.5 million, the flip side of those charts is that 90% of the population feels fine or in the same health condition they had before the pandemic. Less than 5% of the population has been tested with over 80% of those showing not being infected with the virus. And many of those infected may never show any symptoms. As a result, a false sense of security will continue to grow, since few people have relatives or close friends who have a confirmed infection.

Consequently, Trump has downplayed the need for testing because it is time consuming, costly, not reliable and most importantly it might highlight the extent to which the virus has spread. That would encourage the Democrats in office to continue restrictions on social and business interactions to avoid further infections and deaths. That is something Trump will not tolerate because he desperately needs to get the economy moving before November if he is to stand a chance of being reelected.

As a calculating pragmatist, Trump is focused on the calendar. It doesn’t matter what the pandemic does after the election. Above all, people have to get back to work and receiving income before the election. He will either be president, in which case his strategy worked for remaining as president, or if he loses, then the pandemic will be someone else’s problem.

The only effective counter to Trump’s narrative is to capture the cultural high ground by emphasizing that America is one community, not separate cultural tribes. As well, that a united community protects everyone and not just the lucky healthy ones. It is also one that recognizes that protective measures must be designed to move toward normalcy in social and business activities, in a cautious and controlled fashion. The data support such an approach.

Recently two studies released by universities identified an economic benefit of over $5 trillion results from saving lives across the country in an effort to slow the pandemic down, despite the massive hit to our economy through societal distance restrictions. But that rational approach is boring and too abstract for many people.

Instead this nation needs leaders who can stoke the American spirit of cooperation and trust among our citizens. When that spirit is overshadowed by individualism and personal protection, our society and republic splinters into factions and ultimately invites our nation’s collapse.

Nick Licata
Nick Licata, was a 5 term Seattle City Councilmember, named progressive municipal official of the year by The Nation, and is founding board chair of Local Progress, a national network of 1,000 progressive municipal officials. Author of Becoming a Citizen Activist. http://www.becomingacitizenactivist.org/changemakers/ Subscribe to Licata’s newsletter Urban Politics http://www.becomingacitizenactivist.org/
Previous article
How to Cook a Weed
Next article
Issues or Riots? How Media Coverage Shapes Perceptions of Public Protests