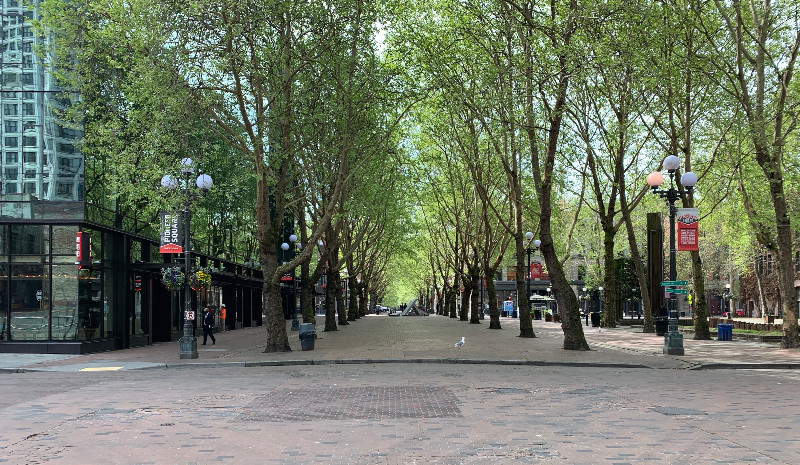 Ground Zero For Seattle Public Spaces: The Conflict That Is Occidental Park

Behind the Grand Central Building in Pioneer Square the red cobbles are mostly bare, with outdoor tables and chairs stacked and stored despite good spring weather. An occasional mother with stroller winds her way through the majestic London Plane trees, along with a dog walker or two.  A few homeless people sleep in the play area.

During our extended coronavirus shutdown Occidental Park is strangely unoccupied, just like much of Seattle. It’s also unwatched and ungoverned. It seems like a sad return to norm. That’s the sad way it seemed, by default, until it was programmed for more activity about five years ago. Since then, on some summer noontimes it has been filled with food trucks, parents with children and adults—homeless and otherwise—sitting at small tables and wielding paddles at big game tables, all mixed up and frenetic. Was that a dream? Those days may never return.

A key improvement came in 2016, when the glass walls of a new Weyerhaeuser corporate headquarters rose to the height of the London Planes, reflecting the stately trees back to Occidental Park and the vine-covered back wall of the Grand Central Building. A corporate headquarters may hardly be what the anti-establishmentarians who built the park in the 1970s had in mind. But the building replaced an ugly parking lot. Now the enclosed park and its alley of street trees are quite beautiful.

Paved urban plazas such as Occidental Park have suffered over the years from neglect and overuse by the homeless. The park activation experiment temporarily rolled back the grinding neglect and balanced the poor-rich equation at a key moment in Pioneer Square history. Hiding places and rain coverings were removed. Seating and permanent furnishings were designed to prevent lying down. Now, in the pandemic, the park has emptied, and the homeless sleep in peace.

And the firefighter bronzes fight on. Perhaps because it saw the open space there as too empty, the city permitted the oversized monument on the south edge of the park, facing South Main Street.  The heroes are arrayed forever in the middle of the broad promenade just before it jumps Main Street to continue toward the Stadium District. Standing and kneeling, they blast intruders figuratively with their hoses, not exactly an image of good governing and policing policies.

Seattle has a conflicted history with public open space, and Occidental Park could be our ground zero. It reflects our best urban dreams and harshest economic realities. There’s great food for sale, but many occupants can’t buy it. We’ve got plans and pictures for every important intersection in Pioneer Square, but we can’t seem to fund the paving or the plantings or the glass blocks in the sidewalks that would replace the historic ones. Private developers are not stepping up, either.

Design and construction are expensive, but that’s only the beginning of the obstacles. Just as green city parks cannot be treated like wild places, urban plazas like Occidental Park must not become desolate. They have to be maintained and policed. Taxpayers and voters have to like them, too.

Planning pictures show young working people with phones to their ears. But how about a modest kiosk for the homeless, where people without smart phones can learn about hygiene centers and lockers, and even make calls?  Instead of bronze first responders, imagine well-paid flesh and blood police in snappy city black, riding their bikes through Occidental Park every hour of every day.  Imagine them greeting people, experts in de-escalation, well versed about shelters and housing possibilities, trained in outreach, and equipped with bodycams and thermometers.

Following the first great push for preservation in the 1960s and 1970s, private investment in Pioneer Square has been slow. The expense of bringing historic buildings up to code while height limitations preclude adding rentable space is hard to pencil out. Longtime owners have tended to hold out for more cash (especially with the boost of the new Waterfront Park expected soon) than price-sensitive local developers are willing to pay. Ground floor retail space is mandated but hard to fill. Homelessness has increased, and the tents of the homeless now line the sidewalks. Many art galleries have migrated out of the Square.

The big blow came in 2010 when, saying it was hit hard by the great recession, Elliott Bay Books bid goodbye to Pioneer Square and opened on Capitol Hill. The Alliance for Pioneer Square was born, primarily to advocate for the neighborhood while the post-viaduct waterfront is redeveloped. It got non-profits like the Downtown Seattle Association and the Friends of Seattle Parks to participate in activating Occidental Park. If it weren’t for the coronavirus epidemic, there might still be noontime presentations and games for all ages, with visible private security and outreach teams.

It’s very quiet now, but if you pass the bronze firefighters and follow the rows of London Plane trees down Occidental Avenue toward the stadium district on a weekday, you will find cranes and pallets behind the old FX McRory’s sports bar, now closed.

The project is called Railspur, and it will be transformative. There will be food and drink on the ground floor, of course, and the upper floors will be filled with offices and hotel rooms. The private developer is Denver-based Urban Villages, which recently designed the much-acclaimed Union Station in Denver. The developer has assembled three existing buildings and is negotiating with two other property owners to repave the alley. Two alleys cross in the center of that block, dividing it into four small blocks. Tracks from an old streetcar spur run through part of the east-west alley.

Urban Villages plans to repair and restore those tracks just because they are very cool, and it hopes the remaining two landowners on the block will participate in renewing the paving. If the plan succeeds, the private alleys in the center of the block will be repaved and accessible according to the latest standards for public rights-of-way in Pioneer Square. They’ll look public, but they won’t be handed to the city and are unlikely to fill up with tents.

Clair Enlow
Clair Enlow is a freelance journalist writing about architecture, planning and history. She’s a Loeb Fellow and an honorary member of AIASeattle.
Previous article
Reimagining America: A Nation of Regional City-States?
Next article
What Would Don Draper Do? Advertising’s Pandemic Pivot