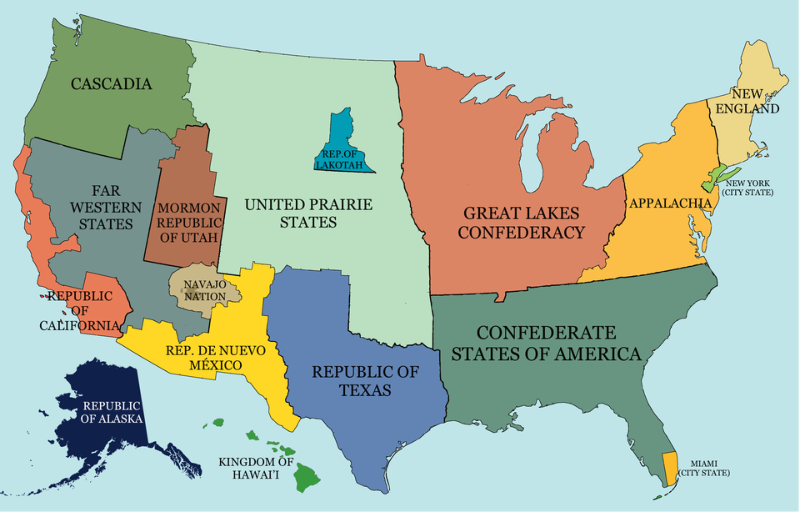 In a definitive book on the failure of Reconstruction, historian Eric Foner describes the profound constitutional debates over civil rights for Blacks as “The Second Founding.” Maybe there was a Third Founding during the 1960s and the passage of the Civil Rights Act. Might the shock to the system of Trump and the coronavirus lead to a Fourth Founding?

If so, I’d like to put one new/old recipe on the table: greater autonomy for a handful of decentralized city-states, one of which might be Seattle and its Northwest hinterland. It’s an old idea, stemming back to the pre-constitution confederation of states and Medieval European models. It’s also a new trend, as evident in the quasi-independence of European states under the European Union, and in the recent formation of multi-state pacts to guide the recovery from the COVID-19 pandemic. What I propose is not a reversion to “states’ rights,” which was the ploy used to undermine Reconstruction and fend off democracy. Rather, I suggest a partial devolution to city-state regions, lightly orchestrated by a dominant city.

City-states have a long history. Indeed, prior to the 19th century, these small, self-governing, partly independent political units, comprising a dominant city such as Florence or Amsterdam and their hinterlands, were the norm, the ideal, and the drivers of economic and cultural advances. They combine human scale with economic scope. Indeed, this model for urban democracies was the founding idea of America. Autonomous states and proud urban freedoms were conceived as a way to resist an overweening national government by checks and balances.

It is still the core tension of the dynamic American polity. As Professor Woodrow Wilson observed, “The question of the relation of states to the federal government is the cardinal question of our constitutional system…[and] every successive state of our political and economic development gives it a new aspect, makes it a new question.”

Out here in Cascadia, there are a few examples of this kind of devolution. Sightline Institute, focusing on the eco-region defined by the watersheds of the Columbia and Fraser rivers, is one example. I was once part of a quarterly magazine called “The New Pacific,” which wrote about common topics in politics, economics, and culture for Portland, Seattle, and Vancouver, B.C. That magazine, edited by the climate expert Eileen Quigley, was inspired by the dream of Northwest regionalism that former Mayor Paul Schell and his friends Tom Alberg and Bruce Chapman long propounded. Alas, Portland was worried (then) about Seattle “imperialism,” and the Canadian border intervened, and the magazine wilted away.

One of the problems with these regional aspirations is that Portland really developed the agricultural hinterland to the East while Seattle, cut off by the Cascades and lacking a big interior river, looked outward for trade. If anything, the Northwest was a captive of Chicago railroads, East Coast finance, and California markets. There has not been a natural hinterland for Seattle, as evident by the Alaska-Yukon-Pacific Exposition of 1909, with its awkward evocation of a far-flung economic realm.

The shining example of an American city-state is Boston, which developed its New England hinterland for selling wood and cheap fish to the West Indies and created a semi-autonomous region that defied London and almost seceded in 1814. A new book, “The City-State of Boston,” by Yale historian Mark Peterson, views New England history afresh by using this lens. Peterson contends that Boston should not have signed the Constitution, which yoked the region to the slaveocracy of the South, a mistake compounded by New England’s mills’ dependence on Southern cotton. Ultimately, Boston like most other city-states, split it political unity over abolitionism, lost its independence and economic autonomy, and became beholden to outsiders and the sway of the nation-state. Boston “lost” the Civil War.

Now, I would argue, we are becoming a Disunited States of America. Some of this is due to the faltering of the federal government, leading up to Trump. With the end of the Cold War, America’s appetite for military strength and world leadership has flagged after 100 years. Cities like Seattle with their “born-global” corporations are economically centrifugal. Polarization divides red zones from blue. One wonders if Humpty-Dumpty can be put back together, or if it’s better to make a virtue out of a more fragmented, diverse order.

And what would a city-state of Seattle look like? It would be a progressive bloc, quite unified in its politics, particularly over the environment, social justice (attention Amazon!), and climate issues. It would be diverse, welcoming to migrants, globally open, tech-driven. Seattle would broaden its political base by being more helpful to the region (vodka plants to help farmers, a UW branch at The Evergreen State College, in-resident college rates for all three states/provinces, high-speed rail). Seattle would be less politically isolated and vanguard-y, but act more inclusively and regionally (spreading culture, upgrading community colleges, embracing telecommuting and dispersing urbanism across the region as workers leave high-cost cities).

Once there was Hanseatic League of leading port cities in northern Europe. Maybe in the “neo-Medieval” and “municipalist” economy that is evolving as the Old Order decays, there would develop an interlaced order of city-states. Among the candidates for such a league would be such natural regional capitals as Seattle, Boston, Atlanta, Dallas, Chicago, Denver, San Francisco, Cincinnati, and Miami.

Finally, this new federalism might evolve as a natural Plan B if Trump were to be re-elected or if Biden proves too weak for a restoration of national government. Already there are signs of defection, as with the Oregon/Washington/California pact on coping with the pandemic. (Beware of the colossus of California, I say.) These three states now have Democratic dominance and many shared agendas, though they will need to wean themselves from Cold War industries and war’s nation-state agendas.

Could be. And (deep breath, now) the shaping of this new constitutional order might give birth to a new generation of more disruptive, independent, networked, frustrated, racially diverse, and “revolutionary” leaders.