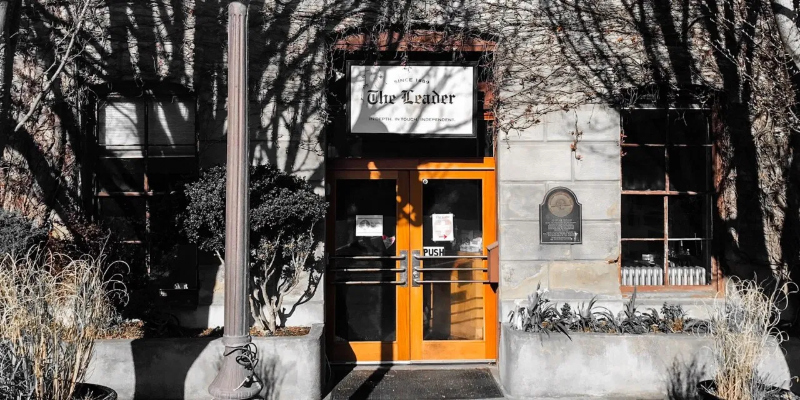 Extinction Event? Local Newspapers and Weeklies may not Survive the Virus

Years ago, when my wife and I started thinking about escaping the city, I had three requirements for my adopted new home.  It must have a good bookstore, a good brewpub, and a good weekly newspaper.

Port Townsend, perched on its peninsula at the entrance to Puget Sound, had it all and much more.  Its 130-year-old weekly, The Leader, was owned and edited by a seasoned newspaperman who understood the role of a community newspaper, and made it happen for a quarter century.

Fifteen years later, the bookstore and pub have been closed by the pandemic.  The Leader continues to publish with a new owners and staff, including some talented reporters. But readership and advertising are down.  Donna Etchey, the newly hired publisher, took over March 16, the day after the governor shut down the state. “Nothing like stepping in front of a firing squad,” she groans.

Most newspapers, dailies and weeklies alike, are struggling.  Even 30 years ago, when they were hugely profitable, one wondered about a business plan that depended on 14-year-old kids riding bikes through neighborhoods and tossing rolled-up papers on front porches.  The internet lured away younger readers, leaving newspapers dependent on aging boomers, the last generation with an ink addiction.

Small suburban weeklies appear to be particularly at risk.  Sound Publishing, the Canadian-owned regional media conglomerate that owns more than 50 Northwest newspapers, has stopped printing some of its 20 weeklies, most of them in King County. “We’ve seen revenue reductions of 30 to 70 percent,” says Josh O’Connor, president of Sound Publishing. “It took five years to recover from the last recession.”

The economics aren’t complicated, says Fred Obee, a former Leader general manager and now director of the Washington Newspaper Publishers Association, which represents some 80 weeklies across the state.  Weeklies depend on revenue from display ads placed by local small businesses.  When those businesses shut down, they stop advertising.

In a national and worldwide pandemic that is killing thousands of people and paralyzing economies, small-town and suburban weeklies may seem disposable.  They are miniscule businesses that do not drive economies nor shape public opinion. They employ a lot of people; Sound Publishing claimed more than 600 until they started laying them off in droves.  But many of these are young aspiring journalists who work for starvation wages in hopes of working their way up to a job at The New York Times. Now they stand to make as much on unemployment as they did in newspapering.

As small newspapers disappear, the impacts are largely cultural and intangible.   The good ones tell readers what their local town council is up to, who’s running for mayor, or what caused that car crash on the highway through town. They print police blotters, high school football scores and lots of letters to the editor.

Ray Miller-Still is an affable 28-year-old who is the editor of the Enumclaw Courier-Herald, a free weekly which claims a circulation of 11,000.  He’s also the reporter, copy editor and photographer.  If the paper delivered, he would do that.

“We cover Main Street, the businesses that keep us alive,” he says.  “Most of the Sound Publishing papers have their offices off in Federal Way or Bellevue. We’re one of the last with an office in the community we cover.  Readers need to be able to walk into your office and tell their story to a reporter.”

A decade ago, he says, the paper employed 20 people. Four years ago, when he started, it was down to six.  “Now it’s just me.”

With ads drying up, the Courier is one of the Sound Publishing weeklies in limbo.  He hopes it will last through the month.  After that, who knows?

Five hours drive over the Cascades in Winthrop, Don Nelson faces much the same grim economics as owner and editor of the Methow Valley News, (tagline: “Locally grown, Internationally known”) which sells or mails 2800 copies per week.   Nelson is a smart, seasoned journalist, former editor of the Puget Sound Business Journal and the Skagit Valley Herald. He bought the paper nine years ago.  “I live the dream,” he says, “and work the reality.,”

He has help – three reporters, business and sales managers, a designer, and a number of unpaid writers with professional experience.  They’re all working from home, leaving Nelson alone in his office in a refurbished Forest Service building.

“The advertising slump will hit hard later this month,” he says. “We’ve cut the number of pages and we’re selling display ads at half price. But I’m worried.  The businesses that support us are mostly nonessential hotels and restaurants, and they’re all closed.”

“We are relentlessly local,” he says. “We do the whole spectrum of community journalism – names and faces, calendars, city and county government, high school sports.   I had a sportswriter until his house burned in the big fire five years ago and he had to move away.  So now I’m the editor, publisher, town hall reporter, editorial writer and, yes, sportswriter.”

The real test comes in May, when summer tourists usually begin to arrive.  Nelson’s biggest money-maker has been the summer magazine, distributed to visitors.  Without tourists, there will be no magazine.

Nelson doesn’t need the job, but the Methow Valley needs its weekly, he says. “This paper has been here 116 years, always locally owned.  We’ll keep publishing because, if we don’t, readers won’t get the information they need.”

Back in Port Townsend, The Leader is something of a hybrid, a cross between a locally-owned and corporate community newspaper.  Scott Wilson, whose parents ran a weekly in Omak, worked for dailies for years before he bought into the Leader in 1989.   Over the next 27 years, he hired experienced journalists who made the paper essential reading in a town that was being transformed from a blue-collar mill town to an economy based on retirees and tourism.  In 2005, the Leader’s print circulation reached 10,000 – remarkable penetration in a county of just 30,000 people.

Wilson weathered the recession of 2008-10 without layoffs, but the effort left him exhausted.  In 2016, he resisted pressure to sell out to rival Sound Publishing, and sold instead to the Mullen family, which operates Pacific Northwest weeklies.    Within months, the entire news staff was gone, replaced by newcomers who had little or no knowledge of the community they were covering. Eventually, the Mullens brought in a skilled editor, Dean Miller, who quickly elevated the coverage.  Then, early this year, Miller quit to take on the “Save The Free Press” project at the Seattle Times.

Now it’s up to Etchey, the newly-hired publisher, who previously worked 20 years as a manager of the Sound Publishing weeklies in north Kitsap County.

“So far, I’ve only had to lay off one employee,” she says. “Our advertising base is staying true, and we’re getting more online traffic.  But we’ve lost revenue.”

Just to make matters worse, the local county commissioners pulled the Leader’s contract to publish the county’s legal notices and awarded it to the Peninsula Daily News in neighboring Clallam County.  Once the contract was signed, the PDN announced it was eliminating its Port Townsend edition, so Jefferson County will be spending $20,000 a year to publish legal notices in another county.

“This will end eventually,” Etchey promises. “And we’re going to see something totally different.”

As weeklies quit printing, they accelerate the painful process of moving from newsprint to digital journalism.   With a mean age of nearly 60, Port Townsend has one of the oldest populations in the nation, which suggests the paper should have a high percentage of readers who still prefer a printed page over a digital screen.   This largely explains the paper’s claimed circulation of 5900 per week.

But that was before the pandemic. Like the Methow weekly, the Leader depends heavily on restaurants and other tourism-dependent businesses.  The most recent edition was reduced to a single, thin section with a smattering of ads.

“We’ve been through a lot,” says Obee, the WNPA director.  “But this feels very different from 2008-2009.  Back then, weeklies lost most of their real estate and car dealership ads.   It felt dire.  But I worry that the economic consequences from this will be much worse.”

This story is republished from the new Port Townsend writers collective website The Rainshadow Journal.

Ross Andersonhttps://rainshadownorthwest.com/
Ross Anderson is a founding member of the Rainshadow Journal collective. He retired to Port Townsend after 30 years of journalism at the Seattle Times.
Previous article
A Rite of Spring: How Easter Got Its Name And Its Traditions
Next article
Seattle Arts for the Plague Years: A Dozen Ideas