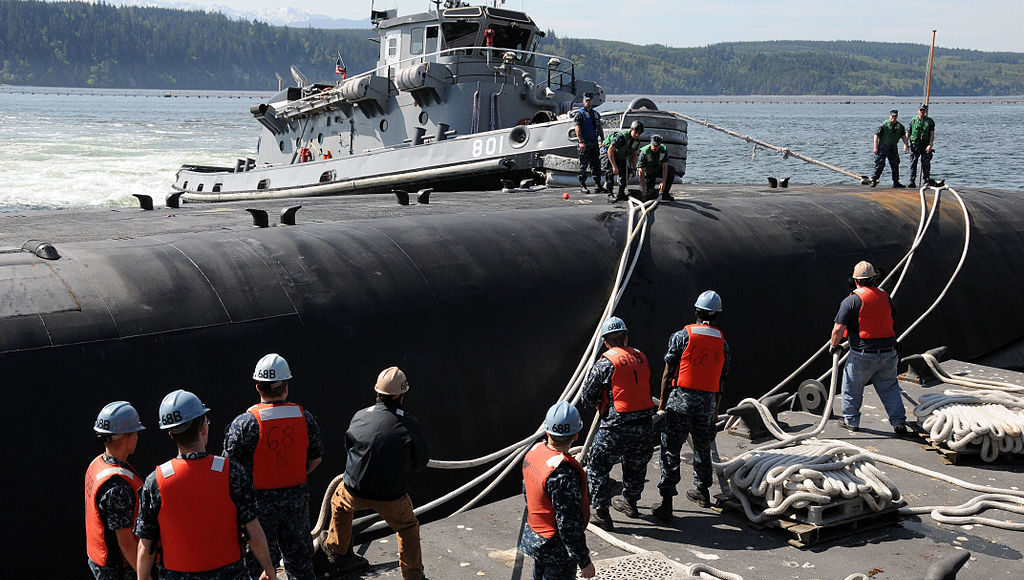 While we’ve been distracted by the U.S. Navy secretary’s bungling of the USS Theodore Roosevelt COVID-19 outbreak, Washingtonians may have missed some other dubious military actions taken by the Trump Administration.

The Pentagon last week issued an order to defense installations prohibiting them from public disclosure of coronavirus infections among their ranks. That has stirred fear in civilian and military communities in places like Naval Base Kitsap-Bangor, Puget Sound Naval Shipyard and Joint Base Lewis McChord that the virus could be spread to those unaware that an infected person was in their midst.

Also last week, the Pentagon furloughed 4,500 South Korean employees supporting the U.S. military presence in that allied country. The mutual defense agreement that had been in place for decades expired at the end of 2019. Negotiations over the past three months between Seoul and Washington failed to resolve the impasse over President Donald Trump’s demand for a 400% increase in South Korea’s contribution to the cost of hosting 28,500 U.S. troops deployed to keep the peace in Asia’s most volatile region.

The muzzling order on coronavirus cases and the slashing of South Korean employees of the U.S. military have been overshadowed by the scandals tumbling out of the Pentagon’s revolving door. Acting Navy Secretary Thomas Modly resigned Tuesday after firing the captain of the Roosevelt for sounding the alarm of coronavirus epidemic aboard the aircraft carrier. Modly flew to Guam on Sunday to upbraid the ship’s 5,500 sailors for supporting Capt. Brett Crozier, who the Navy chief called “too naïve or too stupid” to have command of a carrier. Congressional leaders called for Modly’s resignation, which came a day after Trump criticized his attack on Crozier as “rough.” The captain has since been reported to have contracted the virus.

In the midst of the Roosevelt debacle, U.S. Sen. Patty Murray, D-WA, proclaimed herself “deeply alarmed” by the secrecy being imposed on military facilities in Washington State, where 64,000 American military personnel are based and tens of thousands of civilians work alongside them. Murray expressed her concerns in a letter to Defense Secretary Mark Esper on Monday and vowed to keep pressing the Pentagon chief for an explanation until she gets one.

Washington ranks seventh in the nation in its military population, heavily concentrated in the Puget Sound area and intertwined with civilian employees whose jobs are also considered essential in an economy otherwise locked down to halt the spread of the virus.

“I am deeply alarmed by the Defense Department’s decision that will seemingly leave many of our service members, military families, community members and more without the information they need to protect themselves and others and stay healthy,” Murray said.

Other state political and business leaders have called on the military hierarchy to explain how they plan to protect the health of their employees. Prior to the Pentagon secrecy edict issued on March 31, Navy officials in Kitsap County reported that four Navy SEALS at the Bangor base, a sailor on board the USS Carl Vinson and a worker at the Bremerton naval shipyard had tested positive for the coronavirus.

Steve Anderson, who was PSNS executive director from 1997 to 2004, expressed his concerns in a letter to the Kitsap Sun that the new military policy could foster “distrust in government.”

“The goodwill and trust of the community is an asset to the Shipyard which performs heavy industrial work in the middle of the city” of Bremerton, he wrote. PSNS employs 14,000, many who commute by ferry from cities around Puget Sound where they could be spreading the virus farther if they don’t know they’ve been exposed.

Joint Base Lewis McChord employs 54,000, and more than 20,000 people work at the Navy’s nuclear submarine base at Bangor.

The Pentagon’s move to furlough half of the 9,000 South Koreans employed to support the U.S. troops defending the region has likewise been criticized as ill-timed at best. As The Economist pointed out in its latest edition, the United States is reportedly trying to obtain COVID-19 test kits from South Korea, a vital piece of the scientific community’s strategy for ensuring that the virus is eradicated before lifting stay-home orders ravaging the economy.

Trump’s standoff with South Korea over the cost of providing troops to protect the peace in the Western Pacific reflects his transactional view of alliances that previous presidents valued as serving the higher purpose of making the world safer. He has also complained bitterly about allies in the North Atlantic Treaty Organization not spending enough on defense and made vague threats that U.S. forces might not come to their defense if attacked unless they take on more of the financial burden-sharing.

U.S. Forces Korea commander Gen. Robert B. Abrams called the move to suspend 4,500 South Korean workers without pay “unthinkable” and “heartbreaking.” In a videotaped address to the military and civilian work forces, Abrams said the U.S. forces in South Korea would “work to minimize the impact on our ‘fight tonight’ posture despite the strenuous circumstances,” hinting that defense readiness is affected by the loss of support staff.

Much of the U.S. presence in South Korea is deployed along the demilitarized zone bordering North Korea, which has continued throughout the COVID-19 crisis to provoke the U.S. and its Asian allies by firing missiles and conducting nuclear tests in violation of U.N. prohibitions.

Carol J Williams
Carol J. Williams is a retired foreign correspondent with 30 years' reporting abroad for the Los Angeles Times and Associated Press. She has reported from more than 80 countries, with a focus on USSR/Russia and Eastern Europe.
Previous article
“Amazon Tax” Bill Introduced in Seattle City Council
Next article
Revolution or Devolution – The End of America’s Status Quo