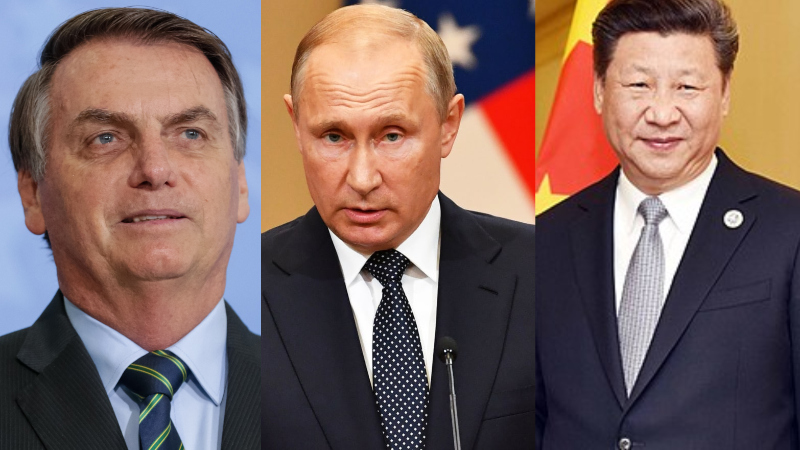 In the current coronavirus pandemic, authoritarian-oriented leaders, whether communist or capitalist, initially portrayed the virus as an insignificant danger. Once they could no longer ignore the mounting number of infections and deaths, they turned to deflect criticism to condemning the behavior of others. Their major concern was not protecting the welfare of their people but protecting their image as a heroic leader whose control was above being challenged by men or nature.

Bad news resulting from natural events, such as the COVID-19 pandemic, is particularly troublesome to them. The leaders of the two largest authoritarian nations, Russia’s Putin and China’s Xi, both initially downplayed the coronavirus pandemic and then accused others for their nation’s derelict response. The leaders of two of the largest democracies, Brazilian President Jair Bolsonaro and our own President Donald Trump, followed the same behavior of first ignoring the coronavirus problem and then blaming others.

On January 20, Chinese President Xi Jinping commented publicly for the first time on the virus, and ordered “resolute efforts” to control the outbreak. However, a transcript of China’s most powerful decision-making body, the Politburo Standing Committee, revealed that Xi was already aware of the virus on January 7. Two days later, the Chinese health commission said a 61-year-old man had died of the virus. Xi did not inform his people about the spreading virus for two weeks while, according to his government, it infected close to 300 people.

Even within China’s tightly controlling mainstream and social media, word of a deathly virus was spreading too fast for the censors to shut it down. Once Xi had to admit that there was a such a virus, he began to find someone to blame.

China’s Foreign Ministry spokesman, Zhao Lijian, tweeted that “It might be US Army who brought the epidemic to Wuhan.” Xi blamed local communist officials in Wuhan for not dealing with the virus after they had pointed to China’s top-heavy central government for not giving them the authority to act. Soon afterwards several top Wuhan and Hubei officials were fired for not acting fast enough to contain the virus.

Russia’s President Putin reacted in a similar fashion of initially downplaying the coronavirus. Through his control of the media, very few coronavirus infections were reported. As late as Sunday, March 22, CNN reported that Russia, with a population of 146 million, had fewer confirmed cases than Luxembourg, with a population of less than 1 percent of Russia’s. A few days later he was assuring the public that the coronavirus was “under control.”

It was not until Saturday, March 28, when Putin decided to close all of its borders and ordered all citizens to stay home for a week unless they provide essential services. His staff probably had gotten to him that the number of confirmed cases of COVID-19 reported to the World Health Organization had more than doubled. No health experts have suggested a week’s confinement is anywhere close enough time needed to contain the virus from spreading.

Opposition posted on the internet that there were over 20,000 confirmed cases in Russia. As in China, the government was removing any critical postings on social media. Fortunately for the public, Anastasia Vasilyeva, a doctor and leader of the non-government Alliance of Doctors union, was able to get out her claim that the authorities were using pneumonia and acute respiratory infection as a cause of sickness not the coronavirus. Technically the authorities were correct because people don’t die from the virus, they die from the conditions that it produces, which is pneumonia and acute respiratory failure.

Brazil’s President Jair Bolsonaro was elected to office just two years ago on a very conservative anti-government platform. In the case of the emerging COVID-19 pandemic, he denied its danger. He calls the coronavirus a “little flu” that largely threatens the old and vulnerable. On Sunday, March 22, he told his supporters “Confront it like a man, not a boy!”

He has found Brazil’s democratic process detrimental to his own political goals. In particular he ignored his own health officials trying to prevent the spread of COVID-19 by publicly gathering small crowds in neighborhoods within Brazil’s capital.

Then on March 25 Bolsonaro blasted as criminals the governors and mayors of Brazil’s largest states and cities for imposing lockdowns to slow the coronavirus outbreak. He explained to the media that “What a few mayors and governors are doing is a crime. They’re destroying Brazil.” He seemed more concerned with meeting his campaign promise to revitalize their economy than protecting the public’s health. His Minister of Health said recently that if the government is unable to curb transmission, the country’s health system would collapse by the end of April.

President Trump is not an authoritarian, although he has admired the power they have within their own countries. He had initially denied the dangers from coronavirus  and expected it to be over soon. On February 26, Trump said  “we’ve done a great job in keeping it down to a minimum. We’ve had tremendous success.” At that time, he proudly pointed out there were only 15 infections in the US. “As they get better, we take them off the list, so that we’re going to be pretty soon at only five people.” Two weeks later on March 12 we had 1,645 people infected with the virus. The next day Trump blamed Barack Obama for his own administration’s inability to adequately test enough Americans for the coronavirus outbreak, claiming “I don’t take responsibility at all.”

Trump first blamed China for our country’s slow response to the pandemic because he said they withheld information for two months about the coronavirus. However, the time lapse between the first known death from the virus in China on January 9 and when Trump suspended entry into the United States by any foreign nationals traveling from China on January 30, was less than a month. Without any evidence Trump has repeatedly made the two months claim.

When some Democrats were critical of how he was implementing restrictions on travelers from China, he accused them of  “working the Impeachment Hoax. They didn’t have a clue! Now they are fear mongering.” Trump also singled out Democratic governors for not appreciating his efforts and  told Vice President Mike Pence not to call some of them, “I say, ‘Mike, don’t call the governor of Washington. You’re wasting your time with him. Don’t call the woman in Michigan.’” Trump was upset that they were critical of him for not using federal authority and resources to provide emergency medical supplies and assistance to their states.

In all of these countries, including ours, the authoritarian-oriented leader has received a lot of support because they are perceived as strong leaders. Also, they either control the media or have ideological media allies that endorse their policies, so that the public gets to hear directly from the leader what he wants them to believe.

But, as COVID-19 spreads, even an authoritarian approach cannot demand an end to a pandemic in two weeks. Once the infections and deaths reach a certain point, they must introduce policies that acknowledge that they are not in total control. If there is any lasting effect from this health crisis, it may be a more knowledgeable electorate in democratic countries appreciating that an effective government is an institution, not a cult of supporters following a strong leader.

This article first appeared in The Medium.

Nick Licata
Nick Licata, was a 5 term Seattle City Councilmember, named progressive municipal official of the year by The Nation, and is founding board chair of Local Progress, a national network of 1,000 progressive municipal officials. Author of Becoming a Citizen Activist. http://www.becomingacitizenactivist.org/changemakers/ Subscribe to Licata’s newsletter Urban Politics http://www.becomingacitizenactivist.org/
Previous article
The View From 2023: How Seattle Changed
Next article
Empty Seattle as Seen by Drones