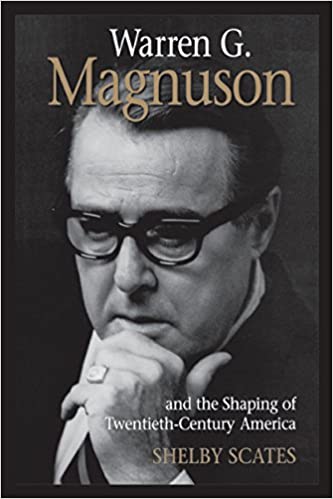 A Bridge Too High? How Warren Magnuson Overbuilt The West Seattle Bridge

A friend reminded me of a passage in the Shelby Scates biography, “Warren G. Magnuson” (U.W. Press, 1997), which bears on the repairs and closure of the West Seattle Bridge. Maybe the Magnuson golden touch with federal funds produced a bridge too high and too vulnerable?

As Scates recounts the story, Sen. Magnuson was elated when he got the news of the freighter Chavez ramming the old West Seattle Bridge. Elated because now Maggie could raid the federal bridge replacement fund and build a new bridge. The Port of Seattle, led by Commissioner Merle Adlum, wanted a high-level bridge so it could extend cargo docks up the Duwamish River. Even the mighty Maggie had failed to find federal funds for that dream. Enter the mysterious, elderly Capt. Rolf Neslund, steering the ill-fated freighter. (Neslund’s wife was later convicted of murdering him and burying body parts under the kitchen floor, according to the book’s account.)

Maggie drained the entire $100 million bridge replacement fund and soon the bridge design was high enough to allow passage of “the highest mast conceivable for a ship at that time; higher than has ever been remotely needed.” Later, the Port gave up on cargo docks on the Duwamish, and the scandal-ridden bridge was nonetheless built too high, and too steep for rail or monorail transit. Scates, a former lead political reporter for the Seattle P-I, quotes former Port President Dick Ford as saying the bridge “should have been built more modestly.”

Hat-tip to Jeffrey Long of West Seattle for the reminder of the Scates’ account.

David Brewster
David Brewster, a founding member of Post Alley, has a long career in publishing, having founded Seattle Weekly, Sasquatch Books, and Crosscut.com. His civic ventures have been Town Hall Seattle and FolioSeattle.
Previous article
Running for Office When the World is Shut Down: How One Candidate Is Adapting
Next article
Coronavirus Chronicles: Unexpected Shortages of Sudden Needs