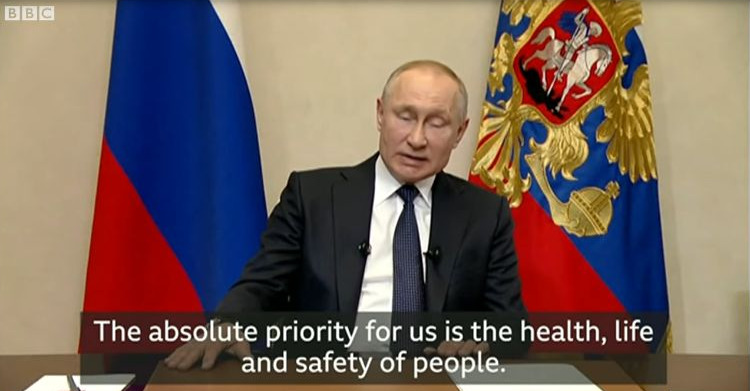 Less than a week after President Vladimir Putin declared coronavirus “under control” in Russia, the Kremlin announced Saturday that it would close Russia’s borders on Sunday and ordered citizens to stay home for the next week unless they provide essential services.

On Friday, the Russian government abruptly suspended all international commercial and charter flights except for organized evacuation of citizens returning from abroad.

The official TASS news agency now flashes a message at the top of its homepage: Budtye Doma – Stay Home.

It’s been a stunning reversal of policy in a country that has been telegraphing to the population that Russia was in “a lot better” situation amid the global pandemic that has slammed neighbors China and Europe with widespread infections and thousands of deaths.

Putin on Tuesday visited a hospital in Moscow caring for what were reported as the few virus patients. The Kremlin leader, wearing full hazmat protection, made his not-to-worry observations as a crew from state-run television recorded his visit. But he was also accompanied by Moscow Mayor Sergei Sobyanin, who interjected that the reason Russia had so few confirmed cases at the time was because there has been little testing.

Sobyanin appears to have taken charge of the virus containment policy, at least in the capital. The TASS announcement attributed the lockdown and mandatory closure orders to Sobyanin, rather than a federal official or government entity.

Putin’s posture during the pandemic had for weeks mimicked that of Donald Trump and Brazilian President Jair Bolsonaro, who persisted in brushing off the threat to their countries from a virus that was spreading rapidly elsewhere.

Russia’s slow and low reporting of new infections began spurring suspicions a week ago that the virus spread was being underreported because it was largely undetected. Two days ago, Russia’s confirmed cases of COVID-19 stood at 568. On Saturday the number reported to the World Health Organization more than doubled to 1,264, four of them resulting in death.

Opposition politicians and independent trade union activists began raising the alarm over the past week. Anastasia Vasilyeva, president of the Doctors’ Alliance with associations across Russia, said in a YouTube video that the country recorded an alarming increase of “community-spread pneumonia” this winter that some health-care professionals suspect were cases of coronavirus.

Russia, a country of 145 million spread across two continents and 11 time zones, has grossly uneven quality in its health care systems. State-run clinics and hospitals in the provinces have seen their budgets slashed over the past five years as global oil prices tumbled and cut deeply into government revenue. Private medical practices in Moscow and other major cities are better equipped but are beyond the means of most Russians.

TASS also reported Saturday that Russians working in Venezuela’s oil industry were being brought home and all operations of the Rosneft petroleum conglomerate shut down. Venezuela, where political chaos and an economic crisis have ravaged public services and health, is another of the countries reporting suspiciously low incidence of coronavirus. Confirmed cases of infection in Venezuela, a country of 32 million, were reported as 113 on Saturday with two fatalities.

Carol J Williams
Carol J. Williams is a retired foreign correspondent with 30 years' reporting abroad for the Los Angeles Times and Associated Press. She has reported from more than 80 countries, with a focus on USSR/Russia and Eastern Europe.
Previous article
The Story Behind The Story Of Trump’s Failed Attempt To Buy A German Vaccine
Next article
Indexer: Sea-Tac is Bigger Than You Think, and More At Risk