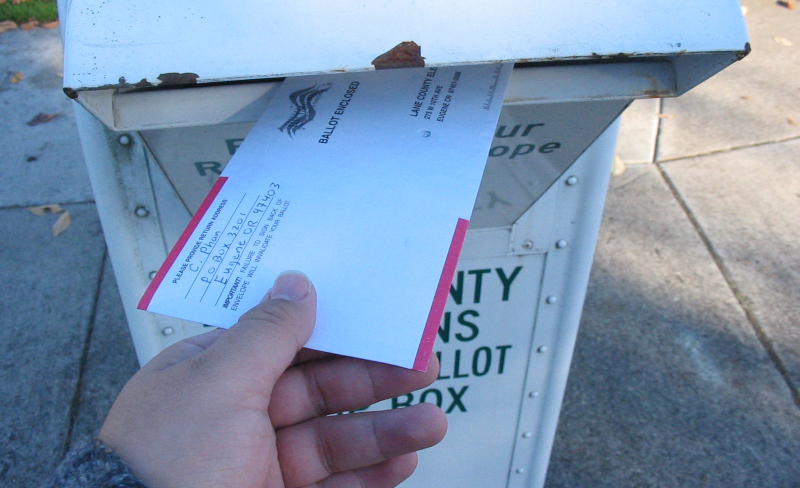 Fans of vote-by-mail, including the vast majority of the Pacific Northwest, are hoping that a national experiment for the 2020 general election could be a side effect of the coronavirus pandemic. But their hopes for a quick victory were killed Wednesday night when Senate Republicans stripped them out of the $2 trillion stimulus package.

The measure instead will deliver $400 million in election aid to states battling to keep their election preparations ahead of the fast-moving Covid-19 virus. That’s far less than Democrats hoped for, particularly a reform package that would have bolstered mail voting at times of disasters and national emergencies.

Many states are already grappling with voting in the age of pandemic; primaries have been postponed in several, and there is a great deal of talk about the general election as a mail-only affair. Senate bill (S.3529) the Natural Disaster Emergency Ballot Act (NDEBA) is clearly a Democratic initiative; its lead sponsors are Oregon Sen. Ron Wyden and Minnesota Sen. Amy Klobuchar. A similar bill in the House is sponsored by Speaker Nancy Pelosi. People for the American Way, a leading progressive organization, promotes major portions of the legislation.

Pelosi inserted her measure into House stimulus legislation, but the main action was in the Senate, where it got entangled in the volatile big-money debates. Regardless of its fate in the stimulus, NDEBA could still emerge as a solution to the 2020 general election.

“In times of crisis, the American people cannot be forced to choose between their health and exercising their right to vote,” Klobuchar and Wyden said in a joint statement Wednesday. “While this funding is a step in the right direction, we must enact election reforms across the country as well as secure more resources to guarantee safe and secure elections.”

Essentially, NDEBA makes it easier for states—and for voters—to follow the lead of Oregon, Washington, Colorado, Hawaii, and Utah in conducting all-mail voting. As the Senate bill’s title indicates, the measure would apply only in time of a national disaster or emergency such as the coronavirus pandemic. The heart of the measure is to pressure states to allow more mail voting, in return for federal funding of costs involved. The measure would allow a voter to request an absentee ballot without citing a reason; theoretically this would open up more demand for mail voting in the 2020 general. Seventeen states now require “excuses” and in 2016 eight of them saw fewer than 5 percent voting absentee.

With the exception of the five mail-only states, the American election system is both expensive and complex because voters are allowed to vote either at the ballot box or by mail, setting up a dual-track or hybrid system for election systems.

While mail voting has proven popular in the mail-only states, the idea engenders fierce partisanship on the part of legislatures—note the absence of Republican co-sponsors on the Wyden-Klobuchar measure. Senate Majority Leader Mitch McConnell is among the opponents; at least in recent years, Republicans have been more likely to back voter-security laws in red states, while Democrats promote wider participation.

Covid-19 may have weakened the partisan stalemate, at least among state election officials—many of whom are elected—if not in Congress itself. As the Washington Post reported, election officers are stressed by the pandemic and looking for help, financially and in terms of providing voting options. Wyden told the Post he has “never seen anything like the support we’re picking up” for the vote-by-mail approach.

Although Wyden’s proposal failed Wednesday, the Covid-19 pandemic introduces a new element into the voting debate; prior arguments had focused on voting customs, cost and turnout. None had the urgency of a pandemic. The issue is not likely to die quickly, although the complexities of changing voting systems require decisions quite soon or states will not be ready in November.

The timing worries Paul Gronke, a political scientist who heads the Early Voting Information Center at Reed College.  “You can mandate mail voting in federal elections, but it’s a really heavy lift; the steps to convert the system are very complex.” All states have a provision for absentee votes, he notes, but 17 states require voters to submit a reason and those states have lower numbers of mailed-in absentee votes. Expanding to an all-mail vote or even removing the “excuse” requirement could overwhelm some systems, he tells me.

If states are unprepared for November, and a delay in the election is proposed, Gronke sees a “constitutional crisis” of historic proportions. The $400 million Congress is sending to the states to prepare is not nearly enough, he believes—as do state election officials.

Total costs to the states to prepare for an election in a pandemic could be up to $2 billion, according to the Brennan Center for Justice, which studies election reform. The biggest cost—up to $2 billion—is to assure access to mail balloting across the country. Even if the Wyden-Klobuchar mandate fails, election officials expect a surge in demand for absentee ballots by people sheltering from the Covid-19 virus, particularly if the virus has a second surge in the fall, as some predict.

Senator Wyden is a natural to be leading the effort to expand mail voting; in 1996 he was the first person elected statewide by mail, in a special election to fill the seat vacated by Sen. Bob Packwood (R). Oregon had been toying with mail voting at least since 1981, when it was allowed in local elections. In 1992, a governor’s commission recommended statewide mail voting as a cost-saving measure and in 1995 the state experimented with a statewide federal primary by mail ballot. Unable to convince legislators to make the experience permanent, in 1998 Oregon voters passed Measure 60 making mail balloting universal statewide. Washington state joined the trend in 2011. Continuing the pioneering tradition, in 2019 Oregon and Washington became the first states paying postage on return envelopes.

Oregonians generally like mail voting, as shown by surveys over the years; five years after mail balloting was initiated statewide, 81 percent were in favor, Democrats slightly more than Republicans. But legislative bodies, always more partisan than the public in general, have often been split along party or demographic lines. States least encouraging to absentee voters tend to color red, and those favoring mail options lean blue.

The trend, however, is clearly toward more voting from home (California is rapidly moving this way). As the nonpartisan National Conference of State Legislatures sums it up: “For states where absentee voting is rising, the policy debate moves from, ‘Should we make the move?’ to, ‘How can we best implement the change?’ In other words, once legislators make the big decision, many smaller choices remain.”

That’s where the Wyden-Klobuchar measure would provide a bridge, by forcing states to experiment with mail voting in 2020 under the auspices of the pandemic. The strategy of folding the ballot reform into the big stimulus deal has failed, but the legislation remains alive as the coronavirus drives the need for more people to vote from the safety of their home.

Floyd McKay
Floyd J. McKay, emeritus professor of journalism at Western Washington University, covered Pacific Northwest politics as a reporter and opinion writer for four decades, primarily in Oregon. He was commentator/news analyst at KGW-TV (King Broadcasting) from 1970 to 1987. Previously a print reporter, he returned to print and online reporting and commentary from 2004 to 2017 with the Seattle Times Op-ed page and Crosscut.com. He is the author of Reporting the Oregon Story: How Activists and Visionaries Transformed a State (Oregon State University Press, 2016). He lives in Bellingham.
Previous article
Notes From The Italian Lockdown
Next article
COVID Field Notes: Cherry Blossoms and Checkout Dramas