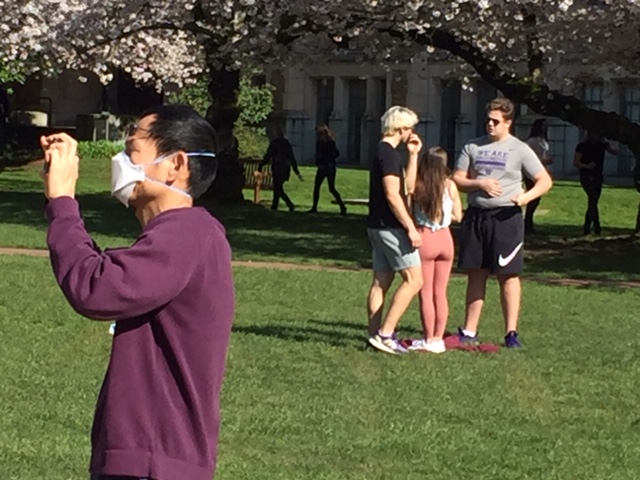 Yesterday, March 25, while medical authorities and Trump aides scrambled to decry or spin his call for an end to anti-contagion restrictions in time for Easter shopping, Gov. Inslee’s escalated shut-down-and-stay-home order took effect. It doesn’t affect supermarkets, but they were still jammed with people pushing overstuffed shopping carts, as at each previous CORVID-19 milestone. Where are all these cans of tuna and bags of rice going? To the food banks, eventually. Northwest Harvest should have a bumper crop of donations when all this is over. (It’s scrambling now to keep up. You can help here.)

At the Ballard Fred Meyer store, where I stopped to get the seeds that will enable me to survive the apocalypse on arugula and snow peas, shopping trumped social distancing. The store had closed all the conventional check-out stations at its north entrance (by the home/garden section) and funneled customers, most of them buying groceries, through two self-checkout lanes.

If this move wasn’t prompted by a staff shortage, it seems puzzling. Self-checking means one person after another touches and breathes on the same keys and other surfaces. Mindful of that, PCC closed its self-checkouts weeks ago.

A harried clerk with no mask rushed from one station to another putting out fires, and they were many; machines seized up or customers fumbled, again and again. A big, burly fellow standing in line roared a running commentary: “Come on, what’s your problem, can’t you do your job?!…” When an East African shopper got bogged down at the machine, the commentator, who was African American, hollered. “Watch out, he’s black, he’s stealing from you!” When his turn came and something tilted, the clerk said she’d have to call the manager. He roared even louder, “Call the manager? Are you trying to embarrass me because I’m black? Are you being racist?” She appeared to be Native American.

I thought of telling him to lay off, she was doing the best anyone could, but realized this might make things worse and not end well. “Thank you and good luck,” I told her as I escaped.

Afterward (isn’t it always that way?) I realized what I should have done: say to all the others cringing at this performance, “Hey, let’s give a round of thanks to this woman and all the others like her who are risking their lives for $15 an hour so we can get what we need!” Clap-clap-clap. Strength in numbers.

Freddie, if you’re reading this, please give that woman a bonus, or combat pay. And, maybe, a coronavirus test.

Things were quieter at the nearby Big 5 Sporting Goods store, where I went to replace the swimming trunks lost at the city pool just before it shut down. Why I wanted trunks when there’s no swimming to be done is a bit of puzzle. To be ready if Lake Washington becomes swimmable, in June, before the stores reopen? As a gesture of faith in the return of normalcy?

“Good thing you weren’t here in the morning,” the clerk told me. “We get a big delivery every Wednesday, and people were lined up around the block when we opened.” For ammunition, I asked? (Media around the country have reported runs on not just toilet paper but guns and, especially, ammo.) “Ammunition and weights,” he replied—as in barbels. “I sold $5,000 worth of weights in the first hour. Do you know how many weights it takes to make $5,000?”

In case you missed out on stocking your weight room, prepare to be among those left behind in a musclebound Seattle when all this is over.

At the UW Quad, the sawhorses, red and yellow hazard tape, and stay-out signs were the only indications, aside from a few masks, that anything was amiss on what may have been be the last sunny day of cherry blossoms. People young and older who had ducked under the tape strolled, ogled the blossoms, took pictures, and relaxed—alone, in couples and in small groups—as though nothing had changed. The few wearing masks were all East Asian. One young woman posed with a mortarboard before a camera on a tripod, apparently figuring she might as well take her graduation shots now. Two young men and a woman practiced hands-on acrobat lifts—a cheerleading routine for games that will not happen?

Maybe they were housemates who’d already shared their microbiological repertoires. Maybe they just didn’t care. Or they’d bought into the view propounded by a controversial New York Times op-ed, columnist Thomas Friedman’s echo of it, the rightwing blogosphere, and our president: The cure is worse than the disease. Healthy younger people should just get the virus, get over it, get back to work, restaurants, dating, etc., save the economy, and establish herd immunity. The old and otherwise vulnerable can be safely packed away until it’s over. Or, as one internet meme has it, “We’ll finally get rid of the boomers.”

Or maybe they were just bidding farewell to the old normal before entering the new. What’s remarkable is how long-ago that old normal seems now.

Eric Scigliano
Eric Scigliano has written on varied environmental, cultural and political subjects for many local and national publications. His books include Puget Sound: Sea Between the Mountains, Love War and Circuses (Seeing the Elephant), Michelangelo’s Mountain, Flotsametrics and the Floating World (with Curtis Ebbesmeyer), The Wild Edge, and, newly published, The Big Thaw: Ancient Carbon and a Race to Save the Planet.
Previous article
Vote Safe: A Vote-By-Mail Presidential Election?
Next article
What the Record Shows So Far: Trump’s Pandemic Performance