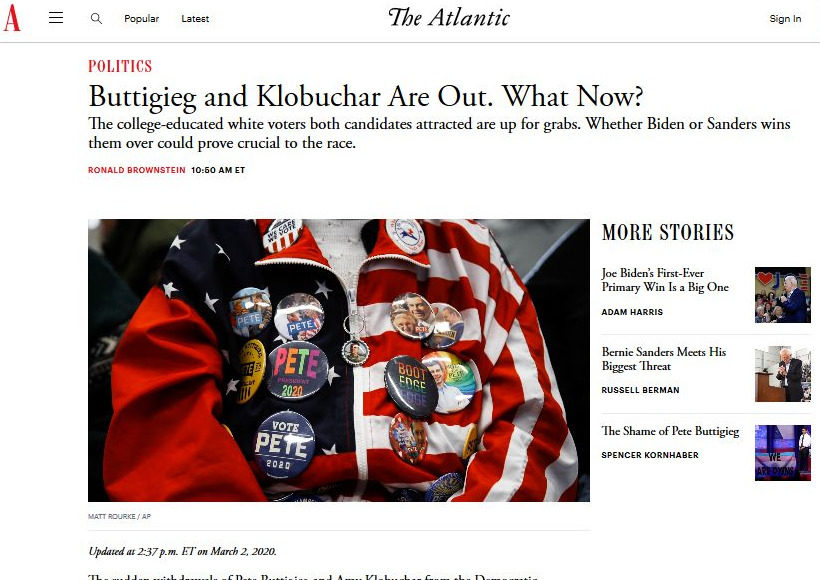 Ronald Brownstein, a shrewd political observer, makes the surprising point that with the departure of Pete Buttigieg and Amy Klobuchar from the race, their support base of primarily white, college-educated voters, is suddenly up for grabs. It’s not clear whether old-shoe Biden or old-dogmas Sanders will be their choice. Elizabeth Warren will provide a holding pattern for these voters, drawn to her wonky idealism, but that just defers the hard choice.

“Wine-track” voters, of which cities such as Seattle are packed, now occupy the unlikely position of being a pivotal vote (and source of funds). Biden, with his dated fondness for clubby inside-Beltway politics, is not exactly their glass of cabernet; and Bernie strikes many of these voters as appealingly idealistic but ineffective. Indeed, many of the 2016 Bernie operatives have migrated into the Warren camp, impressed by her superior legislative chops. While Warren might serve as a fallback candidate, she has a remote chance of actually getting the nomination.

In a sense, Seattle voters on March 10 will face another hard choice between a socialist Left and seasoned pragmatists — recalling the bash-Amazon-or-bash-Sawant? city council election of this past November.

While the trio of Warren/Klobuchar/Buttigieg had trouble attracting minority or less-educated voters, they dominated the wine track. “College-educated white voters have gravitated toward three lagging candidates. In Iowa, they gave a combined 61 percent of their vote to Buttigieg, Warren, and Klobuchar. In New Hampshire, it was 64 percent. Even in Nevada they provided a 52 percent majority of their vote to the three,” Brownstein observes.

All this makes the presidential nominee’s choice of a running mate a critical signal to this bloc, if it comes before the convention. Sen. Warren may not be the easiest slate-mate for the Democratic nominee, but she does appeal to these diplomad voters and has enough Bernie-ness perhaps to keep the left flank from seceding from the party.