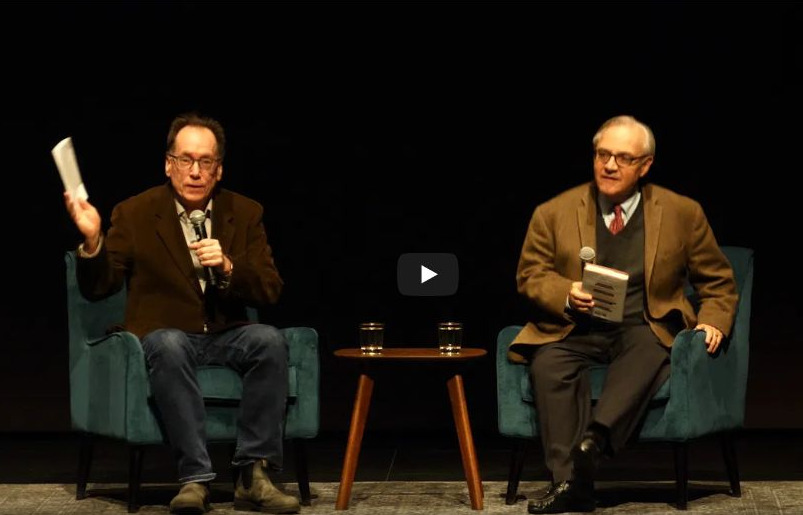 Come Together: EJ Dionne And A Politics Of Unity

After an evening session on politics at Seattle’s Town Hall this past week, I felt encouraged. That isn’t something I have experienced a lot recently on this subject. It was a welcome feeling.

The speaker was E. J. Dionne, long-time Washington Post columnist and author of the new book, Code Red: How Progressives and Moderates Can Unite To Save Our Country.

Dionne’s argument, rendered with his characteristic good-heartedness and self-effacing asides (“I surrendered my Prognosticator’s Card on election night 2016”), was that the distance between progressives and moderates is a small fraction of the distance between those two persuasions and the other side of the spectrum — being the President and Republican Party (or what is masquerading as the Republican Party).

He pointed out, for example, that both groups now agree on something that was a non-starter during the Obama administration, namely a public option on health care. He reminded listeners that if free college education seems radical, it was basically true for many years in our public university systems. Indeed, President Obama had once proposed making the first two years of community college free. The point is that there is wiggle room, space in which to negotiate and to come together.

But these two factions of the Democratic Party, need, in the words of the old ’60s song, to “come together, right now” or very soon. The damage that would be wrought by four more years of Trump is far too great a price to pay for progressives and moderates being intractable and unwilling to work together.

As I recall my religious history, it was those persuasions that were closest to one another for which groups often harbored the greatest enmity. Baptists reserving their harshest recriminations for other Baptists. Different branches of Reformed Protestantism going after one another with greater animus than they exhibited toward the ostensible enemy, the Roman Catholic Church.  I suspect that something similar, what Freud called “the narcissism of small differences,” has been true in politics. In the Democratic debates, the candidates are far more concerned to bring down one another than to defeat Donald Trump.

But as I said, it was an encouraging evening. Not only did Dionne make the point that progressives and moderates are closer together than you might think. He also argued there’s a recent model of such an alliance working, namely the 2018 elections which delivered a historic defeat to Trump and the Republicans.

Dionne implied there was a good possibility that when the Democratic nominee is eventually chosen there will be a move toward party unity that will create a bigger tent. He did acknowledge that this has been a strange year, in that so many candidates have continued their campaigns rather than being winnowed out by Iowa and New Hampshire. This larger field highlights disunity and intra-party attacks.

Dionne also suggested — and I found this surprising — that Bernie Sanders is more capable of compromise and possesses more political savvy than I have thought. I’ve tended to think of Bernie as a cranky old guy who thought he, and he alone, had all the answers. Dionne hasn’t endorsed any of the Democratic candidates but he expects Biden to win South Carolina this weekend, a “must win” for him.

A somewhat similar “come together” line of argument was offered by Tom Friedman in a New York Times column earlier this week. Friedman argued for a national unity ticket and a pre-announced Presidential cabinet composed of a “team of rivals,” harkening back to Lincoln’s cabinet. I also found that column encouraging, even energizing.

Can the Democrats pull it off? I certainly hope so. I left Town Hall thinking that Trump’s re-election is not a tragic inevitability.

Anthony B. Robinsonhttps://www.anthonybrobinson.com/
Tony is a writer, teacher, speaker and ordained minister (United Church of Christ). He served as Senior Minister of Seattle’s Plymouth Congregational Church for fourteen years. His newest book is Useful Wisdom: Letters to Young (and not so young) Ministers. He divides his time between Seattle and a cabin in Wallowa County of northeastern Oregon. If you’d like to know more or receive his regular blogs in your email, go to his site listed above to sign-up.
Previous article
7(0) Deadly Sins: Clifford’s Five-Year Plan For Surviving Trump
Next article
What COVID-19 Might Mean For The Presidential Election