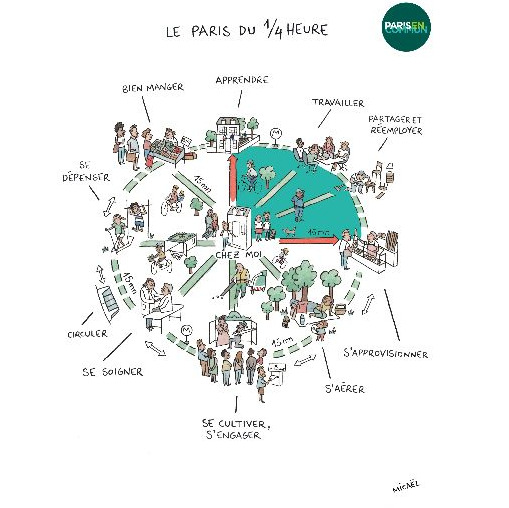 Paris mayor Anne Hidalgo, running for re-election, says that Paris needs to be re-imagined as a “15-minute city.” Under her watch the city has banned cars from areas of the city and worked to unclog urban congestion by making it easier to get around without automobiles. Now she says it’s time to take things a step further – by redesigning how the city functions so that residents live within 15 minutes of all the things they need for day-to-day life:

“There are six things that make an urbanite happy. Dwelling in dignity, working in proper conditions, [being able to gain] provisions, well-being, education and leisure. To improve quality of life, you need to reduce the access radius for these functions.” That commitment to bringing all life’s essentials to each neighborhood means creating a more thoroughly integrated urban fabric, where stores mix with homes, bars mix with health centers, and schools with office buildings.

It’s an idea that fights conventional wisdom in urban design. “This focus on mixing as many uses as possible within the same space challenges much of the planning orthodoxy of the past century or so, which has studiously attempted to separate residential areas from retail, entertainment, manufacturing, and office districts.”

And it’s an idea that is being tried in various forms, elsewhere:

In Portland, Oregon, walking-distance-limited neighborhood planning is seen as central to climate action: The city aims to cover 90 percent of the city in so-called “20-minute neighborhoods,” where all basic needs—with the exception of work—can be reached within a third of an hour of walking time. In Australia, Melbourne rolled out a similar pilot in 2018.

The urban village idea is nothing new, but this idea challenges residents (and planners) to think about how they design and use large cities – not as a vast landscape in which all things are accessible, but as a mosaic of small communities, each of which offers the resources for everyday life.

Douglas McLennanhttps://www.artsjournal.com
Doug is a longtime arts journalist, and the founder and editor of ArtsJournal.com, he's frequent keynoter on arts and digital issues, and works with a number of arts organizations nationally.
Previous article
Biblical Literacy, Now Lost, Was a Key Source of Lincoln’s Greatness
Next article
Dept. Of Awards & Accolades – Why Honor Melania Trump?