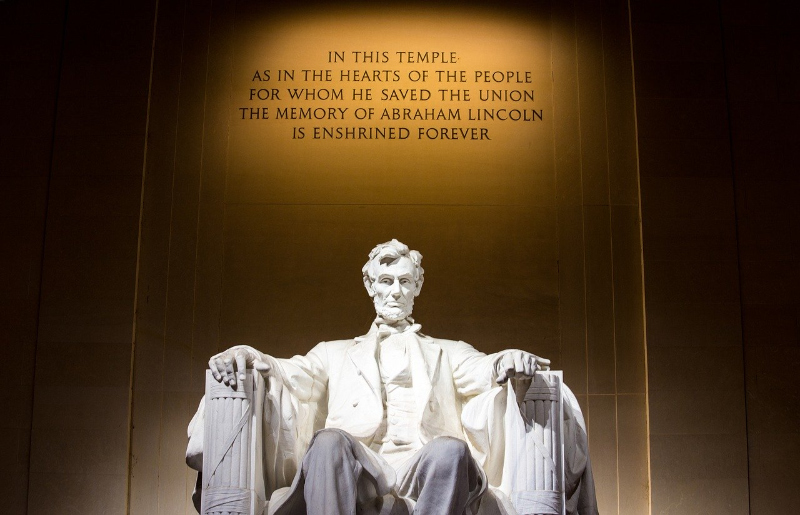 I recently read a President’s Day article in the Wall Street Journal by Rabbi Meir Soloveichik titled “What the Bible Taught Lincoln About America.”

Soloveichik writes, “As hundreds of thousands of Americans died in the Civil War, the 16th president evolved into a theologian of the American idea, using the language and concepts of the Bible to reflect on the war’s larger meaning. This year on Presidents Day, Americans will observe the 211th anniversary of Lincoln’s birth. But in an age of declining biblical literacy, we are in danger of losing touch with a key source of his greatness.”

Rabbi Soloveichik goes on to trace the way that Lincoln drew not only on biblical theology, but on biblical language — its characteristic images and cadences — on one important occasion after another. For example, the beginning of the Gettysburg Address, “Fourscore and seven years ago . . .” Lincoln “knew the audience was deeply familiar with the King James Bible and would recognize the language of the Psalms: ‘The days of our years are threescore and ten; and if by reason of strength they be fourscore . . .”

Adam Gopnik has written that Lincoln “had mastered the sound of the King James Bible so completely that he could recast abstract issues of constitutional law in biblical terms.”

This reflection on Lincoln’s use of the concepts, stories, and language of Scripture points to one of the Bible’s functions, at least historically in Western culture. It has given a larger context, an eternal context, to what in the murk and confusions of the present moment may appear to have no larger meaning or purpose.

Soloveichik argues that this reached its height in Lincoln’s Second Inaugural Address, “the most remarkable piece of oratory in American history.” In it, “Lincoln called his country to repentance and described the Civil War as God’s punishment for American slavery, concluding with the Psalmist’s declaration ‘the judgments of the Lord are true and righteous altogether.’”

Note that Lincoln does not use religious language to sanctify himself or his cause. He conveys a faith in a God before whom all stand under judgment.

Thirty-five years ago now in the classic study Habits of the Heart, Robert Bellah argued that Americans were inheritors and stewards of two primary languages of moral discourse, the biblical one, and the small-r republican one. At that time, Bellah worried that contemporary Americans had pretty much lost these languages and the frameworks they afforded. They had been replaced by therapeutic language and the language of expressive individualism. Bellah felt that the loss of these moral languages, biblical and republican, had left us impoverished.

So now, as Soloveichik writes, “In the twenty-first century, no president could use the language of the King James Bible with Lincoln’s certainty that his listeners would grasp the allusion. But Lincoln’s description of America as an ‘almost chosen people’ remains important, not just as a key to his thought but as a warning for Americans today. A chosen people is eternal, but America is an exceptional nation only if it remains ever loyal to the covenant of its founding, the ideals for which Washington fought, and Lincoln died.”

Of course, contemporary politicians and Presidents do use religious language. But their use lacks the profundity of Lincoln and of the Bible itself. It tends to be more sentimental as in “God bless America” at the end of every speech or superficial as in Mayor Pete’s comments about his faith teaching him to serve others. The Bible, as Lincoln understood it, depicts human life as lived before an often inscrutable God who is nonetheless and in ways mysterious to us, sovereign. “We do not live,” as St. Paul, put it “unto ourselves alone.”

But as Soloveichik’s remarks suggest, ours is “a post-Biblical age.” What now does it mean to read the Bible and to learn to see the world though its story and language? And lacking that framework, what do we have to ground and sustain us?

Tony Robinson will be moderating a panel discussion on the topic “Does the Bible Matter? Reading the Bible in a Post-Biblical Age” at Folio, the Seattle Athenaeum, on April 1.

Anthony B. Robinsonhttps://www.anthonybrobinson.com/
Tony is a writer, teacher, speaker and ordained minister (United Church of Christ). He served as Senior Minister of Seattle’s Plymouth Congregational Church for fourteen years. His newest book is Useful Wisdom: Letters to Young (and not so young) Ministers. He divides his time between Seattle and a cabin in Wallowa County of northeastern Oregon. If you’d like to know more or receive his regular blogs in your email, go to his site listed above to sign-up.
Previous article
Italy: A Culture of Civic Contribution
Next article
Idea: Making Paris A “15-Minute-City”