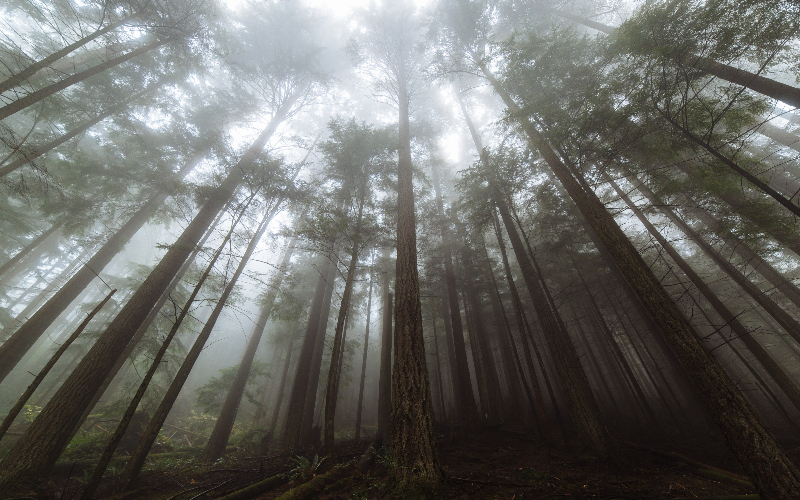 The Northwest’s Ancient Cathedrals (And Our Obligation To Them)

My family moved from Pleasanton, California to Snohomish County in 1949.  A ragged forest of red alder, maple, fir, hemlock, and cedar dominated, but few trees rose more than 40 feet since the area had been clear-cut around 1920.  Huge stumps in the gloom bespoke the great climax forest that once covered much of western Washington. I would later meet Lawrence Webster of the Suquamish Tribe, who announced with a chuckle that he’d done the cutting for the Admiralty Bay Lumber Company which had taken the contract from Pope and Talbot.

To a child of sunny, oak-studded hills, a claustrophobic jungle swarming mid- summer with tent caterpillars horrified me. But gradually birdsong, abundant flowers, berries, and the cool green worked its spell.  Still, all I ever wanted to do was live in a city.

I did so live for 50 years, until coaxed by my wife back to Snohomish County. Trees from those early days now tower over 100 feet.  Many are located beside older homes whose residents cherish them as part of the family. Homes on a turn of Ash Way near the park-and-ride where I catch the Seattle bus have long been shaded by a grove of massive Douglas fir.  Passing through is like entering Mt. Rainier National Park: the stunted workaday world gives way to a soaring cathedral. The difference here is that people coexist with these great trees.

My wife Mary Anne bought our duplex so we could care for our grandchildren.  I was not happy moving back four miles from my old home, but she took me into the back yard and introduced me to the cedar. Western red cedars are more often broad than tall, and ours rises only 60 feet, but its immense, flaring trunk and massive looping limbs took my breath away.  It is like an ancient Mandarin of many arms, long green sleeves spread in greeting. It was her last great gift to me.

Nearby multiplexes and apartments sprout cheek by jowl, and the land scarcely has time to wear weeds before machinery arrives to gouge new foundations.  Green is replaced by homes too large to permit yards. A few trees border streets. Gaunt, crowded tracts are the new ground cover.  By contrast and left to itself, earth re-clothes, beginning a long process climaxing in a forest of soaring, elegant trees whose beauty taxed the language skills of early explorers.

Douglas fir has an ungainly youth.  Cheapskates who prowl cut-over land to find free Christmas trees confront ungainly saplings with long, spindly stems between branch whorls.  It has a gawky adolescence: perky with uplifted limbs, but ragged and fusty, a mess. Nothing inspires despair more than one of these unfortunates along a dirt road coated with dust or sickly green lichen.

But in time a group will lose its lower limbs to shadow, their majestic trunks lifting canopies on a colonnade grander than the Parthenon’s. Their rich, layered foliage, 50 feet across, recall the many-leveled heavens of Central Asian cosmology.   In a society marked by crass commercial architecture, we hunger for a beauty bearing the sacred. And trees would oblige if we let them grow.

But there’s a danger as more people live where land and housing are cheaper. Meanwhile, city programs provide tax credits to preserve historic homes and structures. Such programs could be made available to realtors or property owners to protect their trees.  Older trees adapted to storms with wider root bases are less dangerous than spindly remnants of cut forests left literally to twist in the wind near new housing tracts. Could sturdy single trees and protective groves be adopted to protect them from ignorant development?

In the Middle Ages, cathedrals were begun by those who understood they would never see them finished in their lifetimes.  Lumbermen in a few decades scythed away our forest cover that was a wonder of the world. Centuries must pass before any of that grandeur returns.

But people like me are learning to live with and love trees growing into majesty. It would be a worthy legacy, our “cathedrals,” to bequeath to our future.

David Buerge
Previous article
Impeachment Failed. So Was It Worth It?
Next article
Lawsuit: Who Should Benefit From Revenue From State Forests?