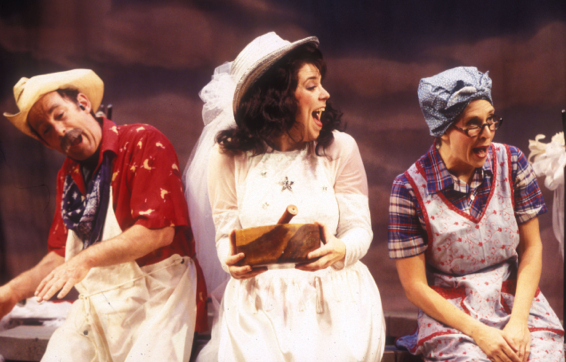 Once upon a time, a long, tall Texan in Seattle was working on a Texas-size undertaking:mounting a new production of Richard Wagner’s gargantuan four-day-long “music drama” The Ring of the Nibelung.

The Texan in question, Speight Jenkins III, knew that people from all over the country and the world would come to Seattle for the show, just as they had done when his predecessor as director of Seattle Opera Glynn Ross first staged The Ring here back in 1976. But the show is so demanding on everybody involved that it can’t be played over four straight days. What could he do to keep all those well-heeled musical tourists busy and satisfied on the off-days? It should be something musical; something dramatic; something related to Wagner.

The solution, proposed by a fellow Texan named Jim Luigs, was a cabaret-style retelling of Wagner’s emotionally grueling 17-hour drama about the end of the world: a 90-minute five-performer country-western retelling of the story they’d been taking dead-seriously at the Opera House the night before.

Thus was born Das Barbecü, a modest one-off entertainment for Wagnerian cognoscenti which has, since its first staging in the old PONCHO Forum space at the Seattle Rep in August 1991 gradually become a staple of American theater. According to Samuel French, the outfit that handles ensuring that dramatists and composers get payed for their work, there have been dozens productions, some professional, some in high schools, often non-traditional venues: The current New York City production (the third there) takes place among the tables at Hill Country Barbecue Restaurant on West 26th Street in Manhattan, and is the first ever to feature real live opera singers.

The great efflorescence of cabaret in Seattle was at its peak when Jenkins gave Luigs and composer Scott Warrender a free hand to come up with the show. Lori Larsen, herself a notable Seattle-born actress who was a founding member of the Empty Space company was chosen to direct. Warrender himself was to lead the three-piece band. Three divas of the cabaret scene (Karen Kay Cody, Rachel Coloff, and Jayne Muirhead) took on about two-dozen of the roles, with John Patrick Lowrie playing the King of the Gods as a beefy cattle-rancher and Jerry McGarity as the god-hero Siegfried, bantam-sized but full of fight. In true Seattle style, the performers contributed material to the show, with Mr Jenkins often dropping into rehearsals, not to supervise but for the fun of it.

The original, gen-yew-ine original was not at all operatic: that was part of its charm. And it probably couldn’t have come into being in any other American city of the time. Informal smash-and-grab performances were a distinctive aspect of the Seattle theater scene from the 1970s onward, starting with the Empty Space theater’s summer shows in Volunteer Park and Norman Langill’s flatbed truck borne One Reel Vaudeville Show. Modern improv was born in 1950s Chicago. Seattle took a different path to distinction: it came to the cabaret.

At the time nobody thought about Das Barbecü as anything more than a one-off entertainment for Wagner fans who could get all the jokes. It worked like a dream for them; each time the Ring was mounted (1991, 1995, 2005) Das Barbecü came back too. But it also turned out to be a show for people who didn’t know anything about the composer other than the Porky Pig-Bugs Bunny version of the Ride of the Valkyries. Along with some burlesque humor and and string-band licks, a lot of love went into Das Barbecü . The characters are exaggerated and comic but the show never mocks them. Watching it, one finds abundant sympathy and emotional truth among the laughs.

The New York Times‘ Ben Brantley pretty much dismissed the show’s first NY staging at the Minetta Lane Theatre in 1994 as an example of camp, like the drag comedies of Charles Ludlam and Charles Busch, and then puts it down for not being more campy. By 2013, the show was being cited in those same pages as one of the enduring works of 20th century chamber opera.

And now it’s the Times’ opera critic Anthony Tommasini, reviewing Barbecü in a barbecue restaurant, saying “the best thing about ‘Das Barbecü’ is that it tries to be more than just a parody. . . . Wagner’s story is reset deep in the heart of Texas, with Wotan as a powerful rancher, Siegfried as a guitar-strumming cowboy, and Brünnhilde as a sassy cowgirl. . . . The production, directed by Eric Einhorn and Katherine M. Carter, certainly captured the piece’s manic energy. But now and then, this ‘Barbecü’ drew out the affecting emotional strands of Wagner’s cycle in playful or poignant ways.”

I remember Das Barbecü‘s first night clearly, clearly as you can remember anything you saw just once nearly 30 years ago. I remember the warmth, the human truth, that Tommasini saw. How agreeable to have it being recognized as a small but precious piece of the grand 400-year operatic tradition.

Roger Downey
Born in Canada moved to Peru's altiplano at the age of six; came to the U.S. at 10 to discover that you don't use your feet to dribble the ball. Learned from the git-go that "America" is an idea, not a place.
Previous article
How Democrats Can Best Exploit The Senate’s Failure To Convict Trump
Next article
Impeachment Failed. So Was It Worth It?