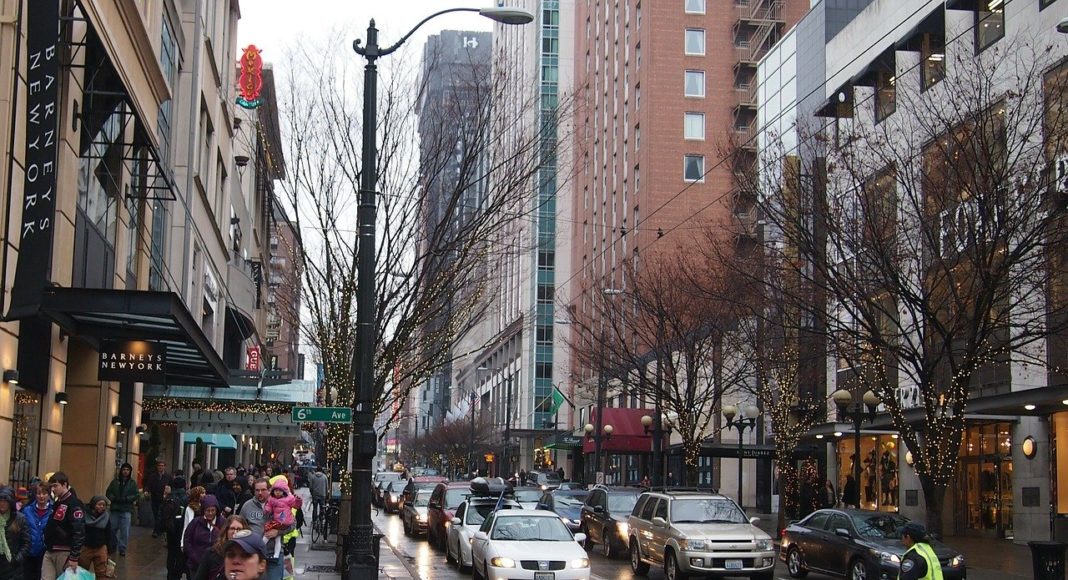 In 2019 KOMO reporter Eric Johnson’s controversial documentary, “Is Seattle Dying?” ignited debate by suggesting that Seattle doesn’t so much have a homelessness problem as an unacknowledged and untreated drug addiction problem. Moreover, at least some of the powers-that-be in Seattle, alleged Johnson, are content to tolerate the illicit drug trade and other forms of criminal activity. In particular, he faulted City Attorney Pete Holmes.

Last week’s shootings in the notorious downtown block of 3rd Ave. between Pike and Pine, with one person killed and several more injured, re-ignited the “Is Seattle Dying?” debate — at least to judge from the Letters to the Editor in the Seattle Times.

Mayor Jenny Durkan, the City Council, City Attorney Pete Holmes, King County Prosecutor Dan Satterberg, County Executive Dow Constantine, Police Chief Carmen Best, and the courts are all coming in for blame. One Letter to the Editor author, Mike Kirk, suggested that this entire slate be put up for a “vote of confidence” from Seattle’s first responders, the police, fire fighters, and medics.

One of Johnson’s points had been how de-moralized these first responders are, in part because they see same offenders, such as those involved in last week’s shooting, over and over again.

One of the most impassioned letters came from a member of the band “Guns N’ Roses” and Seattle native, Duff McKagan. “Two years ago, my band Guns N’ Roses played in Seattle. One of our security staff took a walk to the health and nutrition store GNC downtown from our hotel, and came back shaken up. In all of our travels — and we go to some pretty ‘bad’ cities, crime-wise — he’d never seen anything like downtown Seattle. And this particular individual is a large and very physically able man who served in the U.S. Special Forces. I was crestfallen.”

McKagan concludes, “Something has to be done here . . . I implore Mayor Durkan to make Seattle’s downtown a place of safety.”

Another letter writer, a downtown business owner and resident, Stuart McGehee, also targeted the Mayor. “Unless Durkan cleans it up, Wednesday’s mass shooting will be one among many. Durkan must open her eyes because inaction has not served her constituents well.”

The larger issue of homelessness here has actually seen some progress of late. Key leaders have bought into a more regional approach to the problem. Seattle’s drug court diversion program has proven effective. The numbers of people and families successfully helped to find housing have gone up. And organizations like Plymouth Housing Group continue to do good work and have announced ambitious plans to rapidly increase the stock of housing they have available to homeless people in the next five years.

But little of this progress is apparent on the streets or to the casual observer, as people continue to cite “homelessness” as their number-one issue of concern. While homelessness and gun violence are not the same thing, it all tends to get conflated by a frustrated public.

This is all occurring against the backdrop of what is being called “The Seattle Squeeze, which projects huge building projects in Seattle over the next four years and a big “squeeze” of the city and regional transportation system that is already taxed. Here’s how the upcoming Seattle Squeeze is described at the SeattleTraffic website:

“The Seattle Squeeze is the period from now until 2024 when downtown Seattle will experience massive construction and redevelopment. With more than 60 public and private construction projects currently underway, and another 1,000 projects slated for development, our transportation system is becoming increasingly strained.”

That’s a lot of construction by any measure. Moreover, reading this you might think that everything has been stable and unchanging in recent years, and only now we will “experience massive construction and redevelopment.” My hunch is that most Seattleites feel that all this has been going on for years.

When you put together the concern about public safety in downtown, public frustrations about homelessness, and add in “massive construction and redevelopment” in the next four years, you have to wonder what all this bodes for the future viability of the Emerald City. Same for the electoral viability of Mayor Durkan, who will be up for re-election in two years, and for that most frequent target of public ire, the Seattle City Council.

Anthony B. Robinsonhttps://www.anthonybrobinson.com/
Tony is a writer, teacher, speaker and ordained minister (United Church of Christ). He served as Senior Minister of Seattle’s Plymouth Congregational Church for fourteen years. His newest book is Useful Wisdom: Letters to Young (and not so young) Ministers. He divides his time between Seattle and a cabin in Wallowa County of northeastern Oregon. If you’d like to know more or receive his regular blogs in your email, go to his site listed above to sign-up.
Previous article
Don’t Get Shot! Will Gray Wolves Be Dropped From The Endangered Species List?
Next article
King County, E-book-Lending Capital Of The World