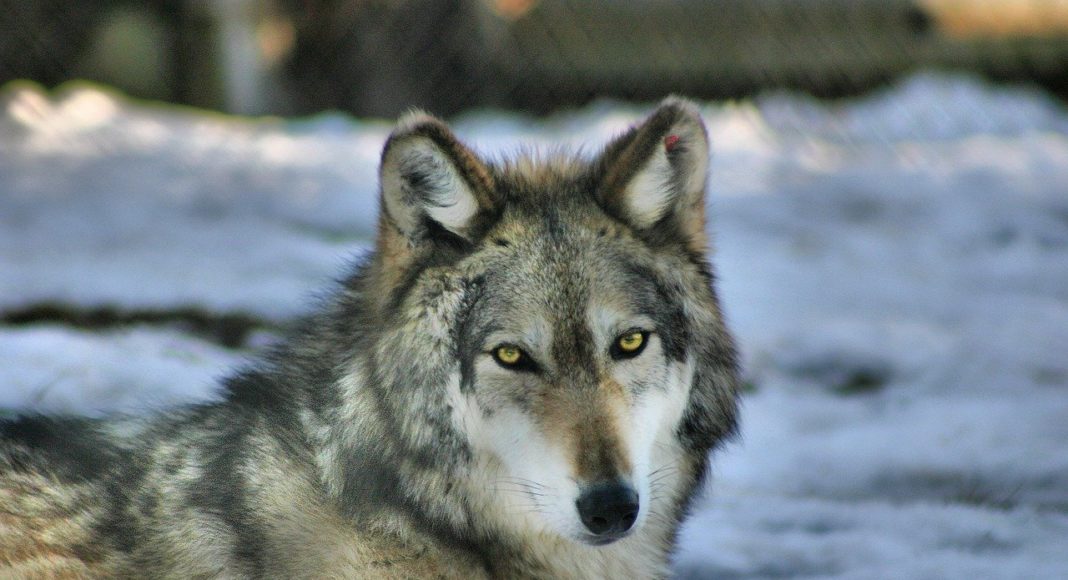 Don’t Get Shot! Will Gray Wolves Be Dropped From The Endangered Species List?

If you were a gray wolf, your New Year’s resolutions may have wisely included “don’t get shot.” That resolution may get harder to keep as the year wears on. The United States Fish and Wildlife Service (USFWS) has proposed dropping all gray wolves from the Endangered Species list in the Lower 48 states. It is expected to act in March.

“We’re going to be watching what the administration does with its proposal to de-list wolves from the rest of the country,” says Defenders of Wildlife senior attorney Jason Rylander.  But he notes Trump’s is “not the first administration that has considered trying to remove wolves.”

Wolves in the northern Rockies, which includes Idaho, Montana, Wyoming outside Yellowstone National Park, eastern Oregon and Washington east of Highway 97, have already been delisted.  During the George W. Bush administration, when the USFWS had tried earlier to delist wolves in most of the northern Rockies, federal courts shot the agency down. But in 2011, Congress took matters into its own hands, delisting northern Rockies populations by majority vote as part of a budget deal to keep the federal government open.

The delisting language in the budget bill was introduced by Sen. Jon Tester (D-Mont.) and Rep. Mike Simpson (R-Idaho). In other words, it had bi-partisan support.  That marked the first time Congress had ignored science and legal precedent and just decided, as a matter of politics, that part of a listed species had recovered.

Closer to home, where wolves are still federally listed west of Highway 97 and are listed by the state throughout Washington, prospects may – or may not – look somewhat better.  If wolves lose all federal protection, they still have the state. But state policy looks uncertain. At the end of September, Gov. Jay Inslee wrote to the state Department of Fish and Wildlife (WDFW), arguing “[w]e must find new methods to better support co-existence between Washington’s livestock industry and gray wolves in our state,” Inslee said in the letter. “The status quo of annual lethal removal is simply unacceptable.”

“Lethal removal?” Yes. Although wolves have a place on Washington’s endangered species list, the state’s wolf management plan says that if a wolf kills domestic livestock, state employees may kill it.  And state employees do. Last year, the state basically wiped out one pack and decided to target some wolves from two others. (Of course, anyone who catches a wolf in the act of attacking livestock, pets, or people can – and presumably would – simply shoot it.)

In the context of protecting livestock, it’s tempting to say, “no one really wants to shoot wolves,” but that would be wildly untrue.  “The 2011 de-listing of the wolf as an endangered species [in the northern Rockies] has led to wholesale slaughter, as it is now left to the states to allow or disallow trapping, snaring, baiting, and poisoning,” writes Melissa Kwasny in Putting on the Dog. “Hatred of them is fierce: in 2013, Montana Fish, Wildlife and Parks issued 24,479 wolf-hunting licenses.” The actual number of wolves killed was only in three figures. And the number of applications may reflect not a hatred of wolves but a desire to kill one as a trophy.  Still, whatever the reason, plenty of people would clearly love to bag themselves a wolf.

In Washington, some people assume that the owners of a single ranch in northeast Washington, the Diamond M, have been gaming the system. “Twenty-six of the 31 eradicated wolves [under the state’s wolf management plan] were killed after the Washington Department of Fish & Wildlife deemed that members of their packs had attacked Diamond M livestock,” Richard Read wrote last month in Phys.org.  “Environmentalists say the ranch not only fails to take preventive steps to safeguard its herds, but in some cases also brings on the bloodshed by leaving cattle near known wolf dens.”

A nation-wide de-listing would “jeopardize this fragile recovery that is really just getting started,” says Humane Society of the United States (HSUS) wildlife protection manager Amanda Wight.  But what is recovery? That’s “a tricky question,” Wight says.  It’s “not just about numbers.”

It’s also about occupying habitat.  A lot of the United States is no longer plausible wolf habitat.  But a lot still is. Wight concedes that not all historic range is still habitat, but nearly 70% of the suitable habitat that remains isn’t occupied.

When I was a little kid in the Bronx, I imagined wolf packs racing down the basement hallways of tall brick apartment buildings. Toward me.  It was not a comforting thought. Now, I rather like imagining wolves roaming the abandoned corridors of bankrupt shopping malls.

I realize that probably won’t happen, but if we wanted to, we might let wolves go back to places that seem almost as unlikely.  An “essential question,” says Defenders of Wildlife senior attorney Jason Rylander, is “are we going to restore wolves everywhere?”  He notes that their historic range includes New England and upstate New York.”

In Washington,” the recovery is going very well,” says Conservation Northwest (CNW) science director Dave Werntz.  The state’s wolf population is growing at an annual rate of about 28 percent. “Washington could be considered a success story,” Werntz says, especially compared to our neighbor states [where] they’re still managing them down to right above [population levels] where they would have to be protected [again] by the Endangered Species Act.”

CNW executive director Mitch Friedman notes that officially the state has about 147 wolves in 27 packs.  “We believe that’s undercounting data,” he says. “I tend to think that there’s, let’s call it 200 wolves in the state.  Let’s call it 30 packs.. Ninety percent of the packs haven’t been involved in conflicts and therefore haven’t been killed. “That gives us 90 percent that haven’t been shot,” he says.  “That’s not bad. Take that [one Diamond M Ranch] family out of the picture, and the state has killed very few wolves.” He’d like to keep it that way.

Most of the state’s wolves live in northeastern Washington.  The state’s first pack in 70 years appeared in the Methow Valley in 2008.  Werntz says the “recovery in the North Cascades has been slower [than expected] largely because of the horrific poaching” that all but destroyed that first documented pack. The pack was a victim of poaching.

The story, which made headlines, could be seen as grist for either a horror film or a dark comedy: A Fed Ex driver refused to take a package from a business in the Omak Walmart when he saw blood seeping from it.  The package turned out to contain a very fresh wolf pelt. Gray wolves were still federally protected in eastern Washington then, and the FBI got involved. The trail led swiftly to a guy in Twisp, who had video on his home computer showing that he had also killed a second wolf.  He, his wife and his father all wound up pleading guilty to federal offenses; they were fined, but no one went to jail.

And once they do get south of I-90, the living should be relatively easy. They’ll find “lots of industrial timberland,” Friedman says, plus: “lots of elk with hoof disease and a lot fewer cattle.”

“Poaching is [still] the main threat” to wolf recovery, Werntz says.  “It’s a cultural thing; it’s more likely to happen when people feel as though their concerns are not being addressed by the agency and by society, being ignored.”  Recent history suggests at least some of the people out in ranching country do feel heard. “We’ve seen an uptick,” Werntz says. “More and more livestock owners are working with the agency” on deterrence.

“Deterrence” – that is, scaring or hassling wolves away from livestock instead of shooting them after they attack – stands at the core of Washington’s wolf-management plan.  Research shows, Wight says, that deterrence is actually a more effective way of protecting livestock than just shooting wolves.  And shooting them can have unintended consequences: It’s widely accepted that a lack of wolves is the main reason why we now have coyotes virtually everywhere.

Friedman wants to keep the state focused on deterrence.  In order to do so, he somewhat paradoxically hopes the state doesn’t turn away from “lethal control” entirely.  “The way we see lethal control,” he says, is that it’s “what gets us buy-in from the ranchers on deterrence.  If you’re not actively trapping, poisoning, or killing [wolves] north of 40 or 50 percent a year [as people are doing in Idaho, Montana and Wyoming], they’re going to expand.  We want to avoid those kinds of mortality rates. We’re interested in having healthy, unmolested old-growth wolf packs. Stable wolf packs tend over time to develop behaviors that can’t be attained by highly transitional wolf packs.”  To avoid a landscape populated by those transitional packs, “we want to keep mortality rates low through deterrence that can only be done by the ranchers.”

“You need all the ranchers investing in deterrence efforts early and often,” Friedman says.  “The only way to do that is, we hold up our end of the bargain.” The way to measure success, he says, is to look at the number of ranchers who have signed on to the deterrence program, the size of the state’s overall wolf population, and its geographic spread.  He thinks the signs are good: Washington has a human-caused wolf mortality rate of only 10 percent.

Most conflicts between wolves and livestock take place on public land.  In Washington, much of that land is owned by the federal government and leased for grazing under federal forest management plans   State policies aren’t all that relevant. But there are big questions of how that federal land should be managed. Government could just order the relatively few ranchers who graze livestock at subsidized rates in national forests to keep their livestock out.

There is, Rylander says, a “philosophical question about how that land should be managed . . . . “Where should there be cows?” he asks.  “That is a subsidy to a private industry.” There are “some places, perhaps, where cattle should not be.”

CNW “would like to see the state double down on range riding,” Friedman says. WDFW does spend money, but the agency is under-funded.  The question shouldn’t be whether or not there are range riders Friedman says, but “do we have enough riders per acre? Are they employed the full year, rather than two months?

“Non-lethal deterrents have not been fully tried,” Rylander agrees.  He attributes this to “a lack of will more than lack of funding . . . [We] have tried to work with wildlife agencies to get federal resources to non-lethal [deterrence]

The “best thing that could be done for wolves,” Rylander concludes, “is to leave them alone.”

Dan Chasan
Previous article
Urban Asset: What To Do With Underused Churches
Next article
Has Downtown Seattle Become a War Zone?