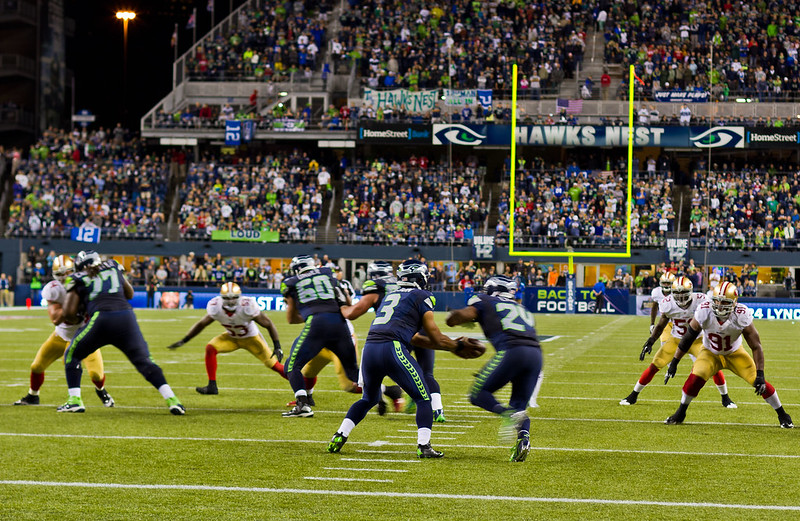 Live Or In Person: Is The Sports Experience Better On The Couch Than At The Stadium?

Laura, our daughter, and I went to the Seahawks final game of the season on Sunday against the 49er’s. She’s a big Hawks fan (working Sundays has cooled her ardor some) so this was her Christmas present.

It was a disappointing game. So close. But they didn’t quite get there. When the last second “delay of game” penalty was called, it was hard to figure out what had happened or why. No football was being played, but chaos reigned.

But here’s what I noticed about myself. When I watch the Seahawks games on TV, which I by and large do, I tend to get pretty hyped-up, emotionally involved, “keyed-up” you might say. Then between Sundays I give way too much time to reading articles about the team and listening to sports radio stations. There’s something addictive about the whole thing. Cigarette manufacturers and pharmaceutical companies aren’t the only ones who know how to get people hooked.

My experience at the game was surprisingly less, not more, intense.

How could that be? 70,000 plus fans thundering noise, cheers and occasional jeers. All the bright lights, fireworks, dance teams, flags, music. You’d think it would ramp up whatever intensity one experienced watching the game on TV about 100-fold.

When you are at home, you are hearing lots of commentary as the game goes on. You hear from the announcers, the reporters on the sidelines, panels of experts at halftime, and the occasional guest expert on officiating. You see replays from 7 different angles about 15 times. Which is to say, you are getting a lot more input of the informational and opinion variety when you are watching a game on TV.

Moreover, and as Marshall McLuhan (“The Medium is the Message”) reminded us long ago, TV is a “hot” medium, magnifying and distorting reality as it focuses the lens on a part of things. I remember being in the midst off the 1990 WTO Battle of Seattle and then watching it on TV later. I thought it a lot worse, or more dramatic, on TV than it had been in person.

At the game, unless you bring a radio to listen to commentary, what you see is what you get. If someone goes in or out you’re on own to figure out who and why. If a player is hurt, you don’t know in what way or how badly. If a particular play works, you’re left to your own football smarts to game out why it worked, or vice-versa, why a play got busted. True there is a big screen that does replays, but they aren’t in your face they way they are on home TV. Overall, I experienced a lot less input just being there in person and watching the game unfold without commentary or behind-the-scenes information.

The TV announcers are basically creating a narrative, a story, about the game. In the stadium, you’re left on your own to create an interpretation of the game or not. (Consider, for a moment, the implications of this for other sectors of life, e.g. politics.)

Consider, also, the McLuhan point about TV/video as a “hot” medium. Could the fact that we receive so much of life mediated through its lens account for the frenzy, intensity, and polarization we now experience?

Being at the Seahawks game sort of reminded me of being a spectator at a college games. Fun but not a huge deal.

Another thing is that while you are watching (or trying to ignore) TV commercials at home, everybody in the stadium is spending that time waiting. The players stand around. Some stroll off and back on the field. They have enough time to order a pizza or call their wives. Quarterbacks walk over to the sidelines to confer with coaches. True, the home team has cooked up a marathon of little events, football throwing contests, honoring a service veteran moments, recognition of someone for community service, etc. But they are easy to overlook. And yes the dance team, a.k.a. cheerleaders, are doing their thing down on the field. But when you’re in the 300 level seats they are a long ways away. So there is a lot of time when not much is happening.

If I were a player I think I’d find it difficult to get going and then have everything on hold for five minutes while the folks at home were being sold pizza, pick-up trucks and beer. Or a new phone. I suppose they get used to it. But it’s a lot different than soccer where the game and action are continuous.

It is, no doubt about it, quite the scene at the stadium, especially as the crowd is gathering, and Blue Thunder, the drum group is going wild. But overall, being there, I found to be less intense than watching a game at home. So if you’re getting too hyped-up about the whole thing, consider going to a game and relaxing, sort of.

Of course, there’s another big difference between the two experiences. Being there costs you a ridiculous number of dollars. Staying home — free, well, sort of.

Anthony B. Robinsonhttps://www.anthonybrobinson.com/
Tony is a writer, teacher, speaker and ordained minister (United Church of Christ). He served as Senior Minister of Seattle’s Plymouth Congregational Church for fourteen years. His newest book is Useful Wisdom: Letters to Young (and not so young) Ministers. He divides his time between Seattle and a cabin in Wallowa County of northeastern Oregon. If you’d like to know more or receive his regular blogs in your email, go to his site listed above to sign-up.
Previous article
Architecture and The Unlamented End of ‘Modernism’
Next article
Bill Gates Advises: Raise My Taxes!