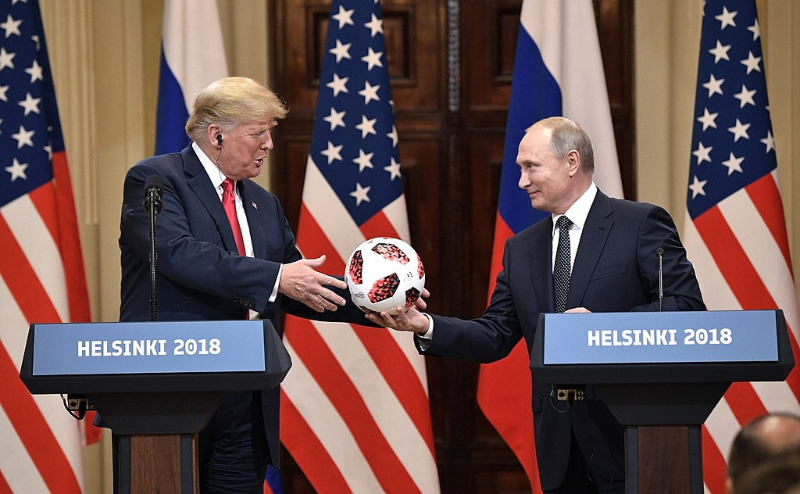 Where Have All the Russia Hawks Gone?

Congressional Republicans could be relied on throughout the past century to attack Kremlin perfidy and Communist propaganda, from Joe McCarthy’s ruinous Red Scare tactics to John McCain’s hesitance to trust reformers during Russia’s brief flirtation with democracy after collapse of the Soviet Union.

The capitulation of U.S. House Republicans to President Trump’s embrace of President Vladimir Putin is as mind-boggling as it is thorough. Throughout the impeachment hearings, they parroted the myth that it was Ukraine that hacked into our 2016 election. That is a debunked conspiracy theory Trump’s own senior national security advisor on Russia, Fiona Hill, called “a fictional narrative that has been perpetrated and propagated by the Russian security services themselves.”

They twisted themselves in knots to argue that Trump didn’t commit a crime in leveraging $391 million in aid to Ukraine for help with his re-election campaign because he was caught in time by a whistleblower. For good measure, they insisted it wasn’t a crime in the first place to try to shake down Ukraine’s novice president because investigation of Democratic rival Joe Biden would be a legitimate step in the cleanup of Ukraine’s endemic corruption.

Not a single House Republican defected from the lockstep votes on Wednesday night on two articles of impeachment: abuse of office and obstruction of Congress. The vote on the abuse charge passed 230-197, with one Democrat, presidential contender Tulsi Gabbard of Hawaii voting “present.”  One other Democrat, Jared Golden of Maine, voted no on the obstruction of Congress charge, approved 229-198-1.

Republicans’ indignation over the impeachment effort is the latest demonstration of fealty to their monarch. They have abandoned their party’s fundamental opposition to tyrannical regimes out of fear Trump will turn his wrath on anyone who acknowledges even a whisper of his wrongdoing.

Not a word was said by Republicans during the hundreds of hours of testimony about how the withholding of Ukrainian aid was a gift to Putin. It not only left Ukraine’s new president, Volodymyr Zelensky, uncertain about when he could purchase offensive weapons to repel Russia-backed separatists occupying huge swaths of eastern Ukraine. It also sent the message to Moscow that Trump’s White House is not a true ally of Kyiv.

Republican capitulation to Trump’s cozy relationship with Putin, a career KGB operative before he was brought to power by oligarchs to succeed a declining Boris Yeltsin, has metastasized to the right-wing media and infected U.S. foreign policy around the world.

Trump’s impulsive decision to withdraw U.S. forces from northern Syria this fall cleared the way for Russian and Turkish troops to seize key territory defended by U.S.-allied Syrian Kurds. Once the American troops left and the Kurds were swept out, Russian troops seized the abandoned U.S. military base for their own staging ground.

Republicans in Congress have been unmoved by Trump’s disparagement of NATO and threats to reduce U.S. forces in Japan and South Korea unless they pay more for those defenses. Breaking up NATO and getting cuts in U.S. resources in the Asia-Pacific are both high on Putin’s wish list for strengthening Russia’s influence in those regions and the Middle East.

Trump makes no secret of wanting out of foreign conflicts and mutual-defense agreements that he regards as drains on the U.S. Treasury. What is now becoming apparent is the Republicans’ willingness to shrug off America’s retreat from its leading role in international security matters.

Trump apologists like Fox News host Tucker Carlson appear to be falling in line with his appeasement of the Kremlin. As Trump ponders easing up on sanctions punishing Russia’s 2014 seizure and annexation of Ukraine’s Crimea territory, right-wing backers have picked up his talking points.

“Why do I care what is going on in the conflict between Ukraine and Russia? … Why shouldn’t I root for Russia?” Carlson asked his audience earlier this month. He later said he was kidding but concluded: “We should probably take the side of Russia if we have to choose between Russia and Ukraine. That’s my view.”

Political commentators less supportive of the president’s Russia swoon have called the emerging alliance of Republican politicians, Christian conservatives and white nationalists a Kremlin “subsidiary,” a transformation of the party of Ronald Reagan to a club of Kremlin “useful idiots” and a dangerous drift from the values of a free society into the little-changed autocracy that Putin has created to keep his own political rivals shackled and critical media silenced.

During an early Republican debate in the 2016 campaign, candidate Donald Trump asked aloud “Why can’t we get along with Russia?” I said to myself, that’s a good question. Probably the only utterance he’s made that I would agree with.

I spent much of my three decades as a foreign correspondent in the former Soviet empire covering the Cold War, the threat of nuclear confrontation, the billions wasted each year in the arms race. It baffled me why Republican politicians would never give Moscow a break, not even in the reform era of Mikhail Gorbachev or when Boris Yeltsin was democratically elected, for the most part, to lead the Russian Republic after the breakup of the Soviet Union.

Corruption and predatory foreign investment empowered the unreformed successors of the Communist-ruled country after 1991. That left Russia vulnerable to Putin’s cunning restoration of a political system over which he has almost absolute power. Critical journalists and opposition politicians turn up dead. Exiled opponents aren’t safe even in law-abiding countries like Britain and Germany. Putin paused in land-grabbing after the Obama administration and the European Union imposed sanctions for his seizure of Crimea. Free peoples of the Baltic states on Russia’s border cringe as the Trump and his Republican enablers turn a blind eye to Putin’s aggressions.

The Kremlin today is little changed from the days of superpower rivalry. What has changed is the view from the White House in the Trump era that democratic norms of a free press, and independent judiciary and the checks and balances of power in Washington are obstacles, not protections.

Carol J Williams
Carol J. Williams is a retired foreign correspondent with 30 years' reporting abroad for the Los Angeles Times and Associated Press. She has reported from more than 80 countries, with a focus on USSR/Russia and Eastern Europe.
Previous article
The Religious Basis for Pelosi Saying She Prays for the President
Next article
Who’s Right About The Democratic Party: Joe Biden or The New York Times?