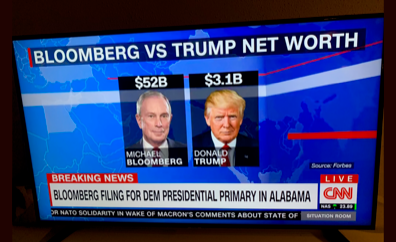 The Michael Bloomberg Lane: Is There One?

The billionaire ex-mayor of New York City isn’t done thinking about being president. Post Alley writers think about that

David Brewster
There must be something in the water in New York, since Michael Bloomberg is now doing the Hamlet act earlier perfected by Gov. Mario Cuomo. Will he or won’t he? I suspect he’s getting in, at least to test the water, and it might work. Once he opens the doors to late entrants, others may jump in, with former A-G Eric Holder one of the possibles. Woe is Joe.

Politico earlier this year, when Bloomberg was in the throes of deciding whether to run, produced a pretty good road map for his candidacy. He’d be a pro-business, centrist outlier for the new populism in the Democratic Party, but he would run on two issues with a lot of resonance for the base: climate change and gun control. These are issues well tested by Jay Inslee and Beto O’Rourke, and they certainly set Democrats’ hearts to beating. The issues are good, and Bloomberg would have an added appeal: he’s highly effective and therefore likely to make real progress on these issues.

Not to overlook the serious problems for an elderly (77 years old) white billionaire with a long and controversial record, but I think there are three other advantages Bloomberg could offer.

Four postulates about a Bloomberg candidacy

David Harrison
It seems clear that Michael Bloomberg believes he has the answers to three questions that many of us have been asking for several months now.

It is not necessarily a bad thing that Bloomberg’s entry means we are still a long way from having a ticket.

Other factors to consider

Tom Corddry
He’d be first Jewish nominee and first Jewish president. Don’t know how much that matters any more, but it’s there. He’d be scrutinized over policy relative to Israel, which is considerably more fraught for Dems than it once was.

He’s associated with Wall Street. He wasn’t a hedge fund manager or investment banker, but his main business success came first by developing his proprietary information system for Wall Street portfolio managers and traders: the ubiquitous Bloomberg Screen. Now he’s a media mogul. Is he still involved in his news services?

He’s living with his long-term partner, a woman to whom he is not married. Maybe that doesn’t matter, but it would be another first.

Presumably he’ll cannibalize Biden and Buttigieg most: good news for Warren and Sanders. Look where climate and gun control got Inslee and O’Rourke.

His age is not a minor factor: he’s nine months older than Biden and five months younger than Sanders. A veritable gerontocracy. Historically, Dems win with charismatic youthful centrists such as FDR, JFK, Jimmy Carter, Bill Clinton, and Obama. He doesn’t fit that pattern.

Post Alley Collective
Previous article
Books: A Seattle Historian on How the West Rescued a Starving Russia
Next article
Trump Could Win in 2020, but the GOP Is Losing Suburbs and Sinking Fast