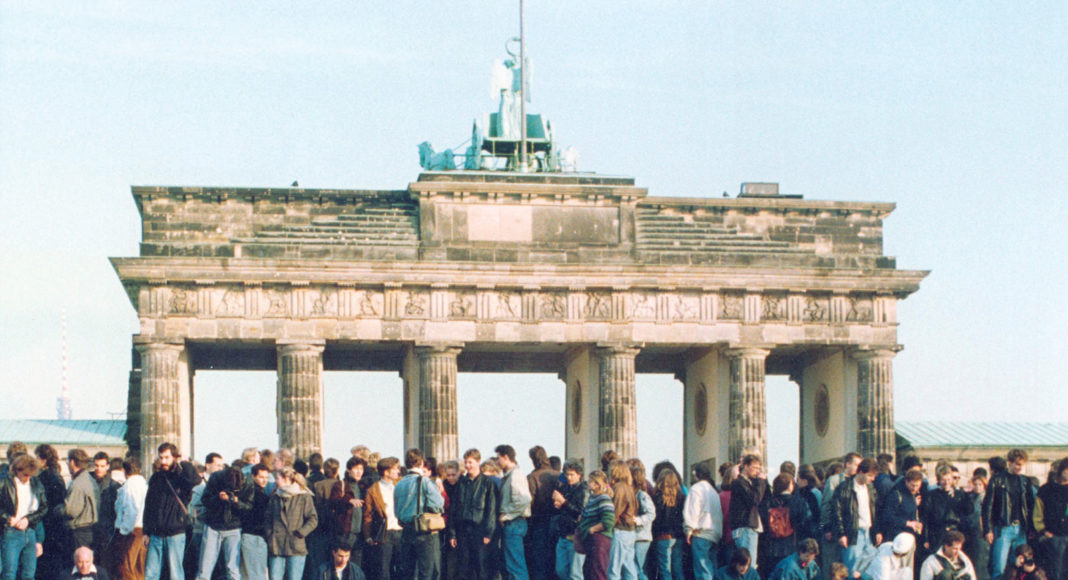 When The Berlin Wall Fell: Euphoria As The World Changed. And Yet…

A few hours before the Berlin Wall cracked open on the night of Nov. 9, 1989, West German Chancellor Helmut Kohl left the country for an official visit to Poland.

The overnight collapse of the hated Cold War edifice was so sudden, so unimaginable until it happened that much of the foreign press corps in Bonn had flown to Warsaw as well to cover Kohl’s planned tour of Auschwitz – the first by a postwar German leader. My editors at the Associated Press considered the chancellor’s symbolic act of atonement for the Holocaust a bigger story than the pro-democracy protests that had been sweeping East Germany since summer.

Kohl and the rest of us scrambled back to Berlin the next day to find the walled-in citizens of the East pouring through the border crossing at Checkpoint Charlie. Oppressed people who never imagined they would be allowed to leave their country gaped slack-jawed with wonder at their first sight of the West.

The liberation was accidental. An East German Communist Party official muffed the announcement of reforms that would allow citizens to travel abroad without state permission. When journalists at the televised press conference demanded to know when the new policy would begin, Guenter Shabowski ad-libbed “with immediate effect.”

East Berliners watching the late-night news coverage left their children sleeping in their beds and wandered over to the border crossing to see what was going on. By midnight there were thousands swarming the rattled border guards, chanting “Open the Gates! Open the Gates!” They did.

Tens of thousands streamed through the breach in the wall overnight. Those on the West side gave each other laced-finger boosts to straddle the graffiti-splashed barrier. They sang peace songs, cradled champagne bottles and danced as if on the grave of an enemy.

Over three tumultuous days, 4 million East Germans – a quarter of the population — flooded into West Berlin to a joyous reception. West Berliners lined the single lane through Checkpoint Charlie, patting the roofs of the slow-rolling convoy of smoke-spewing compacts as they shouted Gut Gemacht – “Well done!” They showered the passengers with flowers and deutschmarks and handed paper cups of sparkling wine through the open car windows. Faces on both sides were wet with tears, eyes wide in stunned disbelief, many tinged with fear that this unexpected freedom could be yanked back at any moment.

It was as emotionally wrenching for journalists familiar with the cruelties of authoritarian regimes as it was for the Germans. I wept from the moment I stepped off the overnight train from Warsaw to witness what I instantly knew was an event that would change the world as we knew it. The toppling of the Berlin Wall inspired repressed peoples across Eastern Europe to throw out their dictators and align with the democracies of the West.

Some called it “The End of History,” a dismantling of the Cold War architecture that would lead to disarmament and an end to the threat of nuclear conflagration. By the end of 1989, the nations of the Warsaw Pact had broken free of the Kremlin yoke. Two years later, the Soviet Union collapsed in what then looked like a rush by its republics to join the newly emerging democracies of Eastern Europe.

The three decades since the Berlin Wall fell have seen successes and setbacks, inspiring transformations as well as missed opportunities. Poland and Hungary benefited from rapid political and market reforms, yet both are now under populist governance and in violation of human rights policies of the European Union they were among the first ex-Communist nations to join. Romania and Bulgaria haven’t thrived, in part due to whipsawing political regimes elected then thrown out by impatient populations. The Baltic states quickly emerged the most prosperous after the 1991 Soviet breakup but again live in fear of Russian aggression of the kind they witnessed against Ukraine over the past five years.

The Kremlin blames the West – the United States, first and foremost – for the new Cold War that again separates the former superpowers. Russian President Vladimir Putin portrays Washington as having gone back on promises made during negotiations ahead of Germany’s 1990 reunification, like the commitment made to the last Soviet leader, Mikhail S. Gorbachev, that NATO wouldn’t expand into East Germany. U.S. investments in joint ventures in Russian oil and other commodities have had little effect in spreading the vast country’s natural resources wealth beyond the realm of Kremlin-aligned oligarchs, leaving ordinary Russians to feel they’ve been exploited.

Thirty years after the first holes were bored through the Iron Curtain, living standards have indisputably improved throughout the former East bloc and its peoples are free of the shackles of Communist governments.

But the expectations of a more peaceful and collaborative world that rose out of that jubilant bursting of the Berlin Wall have been dampened by new threats, unforeseen or underappreciated three decades ago, of terrorism, nuclear proliferation, pollution and climate change.

The Berlin Wall’s opening wasn’t the end of history, it was the beginning of a new world order that brought its own threats and conflicts that are keeping historians and journalists busy 30 years later.

Carol J Williams
Carol J. Williams is a retired foreign correspondent with 30 years' reporting abroad for the Los Angeles Times and Associated Press. She has reported from more than 80 countries, with a focus on USSR/Russia and Eastern Europe.
Previous article
Uber is Escalating the Scooter Battle Into a War Over Big Data
Next article
Election: Voters Produce a Dog’s Breakfast