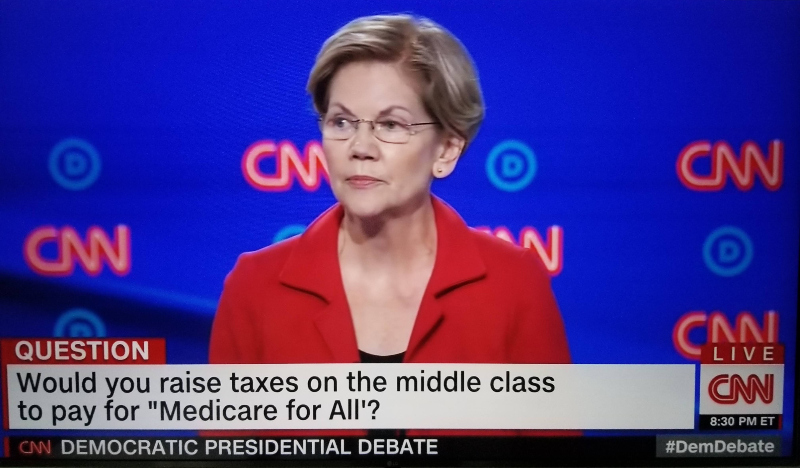 Dem Debates: Warren Keeps Winning the Media Nod. But Why?

The national media seems determined to make this a Warren-bests-Biden race, and I assume they are going to get their wish. So it doesn’t seem to matter all that much how the other candidates actually perform in these debates.

Warren is now clearly considered the front runner, by both the media and her opponents, and was on the receiving end of sometimes sharp attacks from multiple candidates. Her efforts to parry were mixed at best. She at times looked evasive or borderline combative. One example that stood out: Yang is absolutely right that the new wave of automation in our society threatens to spur serious economic dislocation and social unrest, and she was weirdly wrong and unconvincing in denying there’s a problem.

Plus, there is a fair amount of evidence that her maximalist take-away-your-current-insurance-plan Medicare for All position is a big general election liability, and both Klobuchar and Buttigieg deftly exposed how to make her position look unpalatable to less ideological voters.

Yet I still heard her being declared a debate “winner” by the talking heads, because she is queen of the Twitter-and-Pronouns educated white progressive wing of the party, and national journalists at papers like the Times and the Post are all card-carrying members of this cohort.

Biden did a little better than he has previously but he seems old man wobbly and a half step too slow, with too many slip ups to inspire confidence. When it came time to mix it up with Warren, he faded as other candidates like Buttigieg and Klobuchar shined. He mangles numbers when he’s not mangling words or names. At one point he almost said he was in favor of eliminating the capital gains tax (before correcting himself), and repeated verbal stumbles like this really do call into question his mental acuity. That said, he did really well on the “are you too old” question that came up later in the debate.

I sort of expected Bernie to be wheeled out on a hospital gurney while hooked up to an IV drip, but even setting aside my low expectations I thought he did well last night. He didn’t seem any worse for the wear, and he did better defending Medicare for All than Warren did. Still, dude is 78 and he did just have a heart attack on the campaign trail, and when you add in that the media seems to actively dislike him for standing in Warren’s way, he seems done as a viable presidential nominee.

Booker is consistently good in these settings, and yet he gets little media attention (or love) and consistently lags in the under-one-percenter class. The gap between his quality as a candidate and his anemic poll numbers is the largest of any of the candidates.

Klobuchar had by far her best debate, and did well crossing swords with Warren over health care, but absent a total Biden collapse she is going nowhere.

Buttigieg is the the most rawly talented politician of the lot, and he again did well last night, but he has no chance of getting the nomination. If he was 20 years older, and the mayor of the 30th largest city in America (which happens to be Las Vegas), instead of the 305th largest, things would likely be different. But it’s not. As of now, he looks like a precocious 12 year old, and he has zero appeal with minority voters, or really anyone outside the small group of highly educated white moderates who worship at the altar of reasoned discourse and precise thinking.

Kamala Harris is the biggest disappointment of the this election battle. Harris has come across as the most false and inauthentic of all of the major candidates. As an accomplished, multi-ethnic woman she has so much potential appeal to the voters of Biden’s base (moderates and minorities), which is who she really is temperamentally as a politician. But instead she has been tying herself into a pretzel trying to win over the Warren Twitter-and-Pronouns crowd, with disastrous results for her candidacy. Calling for Twitter to shut down Trump’s account was the worst sort of unprincipled, illiberal, hyperpartisan pandering to the Twitter mobs. At least, I hope it’s just unprincipled pandering on her part. Because if she actually believes that what she’s demanding is a good idea, then I would think even less of her.

None of the rest of them merit much discussion. Steyer bought himself onto the stage, where he had nothing interesting to add. Yang is nothing if not interesting, but he’s also unelectable. Beto, who wins the award for biggest panderer of this cycle. He not only won’t build any more walls, he’ll tear down the existing ones, impose mandatory gun buybacks (yeah, right), and strip religious institutions of their tax exempt status for being anti-gay. He is increasingly exposing himself as a lightweight in these forums. Castro? Also a lightweight.

So, all of that said, I have two takeaways from last night.

One, these debates were more fun when Marianne Williamson was on the stage.

And two, watching these debates is making me increasingly nervous. Every one of these candidates seems like a risky nominee each in their own way, and if it is Warren who ends up squaring off against Trump, it’s likely to be a close (and ugly) general election.

Sandeep Kaushik
Sandeep Kaushik is a political and public affairs consultant in Seattle. In a previous life, he was a staff writer and political columnist at the Stranger, and did a stint as a Washington State correspondent for Time Magazine and for the Boston Globe, back in the olden days when such positions still existed.
Previous article
Dem Debates: Mayor Pete Frames the Post-Trump World
Next article
Dem Debates: The Perils of Feverish Factionalism