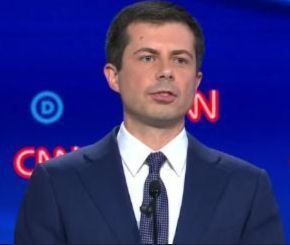 Meg Greenfield, the late and witty editor of the editorial page of The Washington Post, used to say that her test for a good politician was simple and demanding: do they have a good sense of humor? By that test, there’s a new contender among the Democrats, Amy Klobuchar.

My test, former literature teacher that I was, is eloquence, with an emphasis on the ability to frame questions succinctly and profoundly. By this test, the winner is Mayor Pete Buttigieg. I liked the way he framed two aspects of the Democratic race.

First, “Let’s Not Wait.” This has the advantage of making his case against Warren-and-Bernie-style purism, and his additional case for generation-skipping to a young and conceptually liberated politics. That usually works for electing Democrats, he notes, citing JFK, Clinton, and Obama. And there’s a sub-text: millennials — at home in a tech-rich, globally connected, pluralist world — pushing aside too-timid Gen-Xers.

Secondly, Buttigieg frames another aspect very well: how are we going to deal with the nation left in psychological tatters after Trump? His answer, Obama-style, is an appeal to unity, reaching out on the issues (particulalry in the Midwest) that drove voters into a high-risk choice for Trump. (There’s even an echo of Lincoln in this, “with malice toward none, with charity for all.”) This framing is compelling and forward-looking and non-punitive and patriotic and optimistic. It also has the smart sub-text of undermining Joe Biden’s appeal for a restoration of the old pre-Trump order. “That didn’t work,” said Mayor Pete, calling for conceptual boldness and page-turning of a pragmatic sort.

Of course, timing is everything in politics. Now that Mayor Pete has found a way of framing the race, is he too late in this wisdom? It does look as if the top three (Biden, Warren, Bernie) have pretty much consolidated the lead pack in this bicycle race and thereby sealed off the sub-contenders, though Buttigieg is hanging in there as far as fundraising goes. I still think Biden won’t make it to the homestretch, which would leave Warren clearly in front (once she reaches a deal with Bernie for his affectionate bow-out).

Here’s Ross Douthat making this point: “So a big question in this debate and in the ones before Iowa arrives and the also-rans begin to be formally run out is whether Democratic voters can be persuaded to reconsider this consolidation. And last night there were only really two candidates who presented themselves as plausible vehicles for that reconsideration: Pete Buttigieg and Amy Klobuchar.”

This leaves me thinking the Democratic ticket ought to be Buttigieg/Harris, but is more likely to be Warren/Booker. As usual, I found the candidate I prefer just slightly too late to matter.

David Brewster
David Brewster, a founding member of Post Alley, has a long career in publishing, having founded Seattle Weekly, Sasquatch Books, and Crosscut.com. His civic ventures have been Town Hall Seattle and FolioSeattle.
Previous article
The G.O.P. Is Down and Out in Washington State. This Is Not Good.
Next article
Dem Debates: Warren Keeps Winning the Media Nod. But Why?