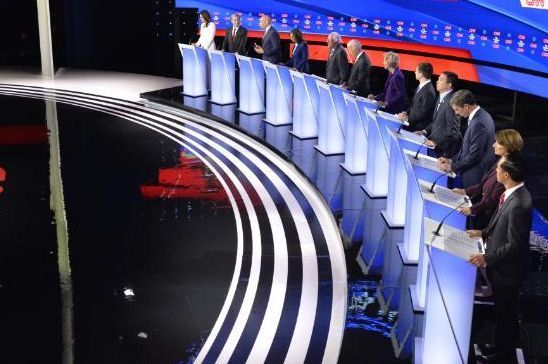 In case you were wondering who is the current “front-runner,” this week’s Democratic debate made it clear: Elizabeth Warren. When Kamala Harris shifted her aim from Biden to Warren, you knew it was true. It was “Let’s all pile on Elizabeth” night. I’d say she weathered it pretty well.

But I’m not sure she answered the question about how she would pay for “Medicare for All.” Or why it is the right move. Into the gap stepped two of the moderates: Senator Amy Klobuchar and Mayor Pete Buttigieg. Both seemed to grow stronger as the night went on and in this debate. Neither was cowed into saying “me too” on extreme positions. Rather, they were clear that what they were after was alternatives that could actually become reality.

Kamala Harris remains a mystery to me. When called upon, it is as if she is playing coy and hard to get. A curious posture for someone running for office. She doesn’t answer a question head-on or directly, but figures out some way to go back to her childhood in order to establish her credibility among the downtrodden. I’m not sure anyone is buying that. If it’s not that childhood play, she wants to remind us that she was a prosecutor. She will need to act more Presidential if she wants to actually become President.

The stage continues to be too crowded, even without big Bill De Blasio. Beto, Julian, Tulsi, Tom — go home, please! Tulsi seems to have found her way into the wrong party’s debates, for she is sounding more like a Republican with each new outing. Might Trump bounce Pence for Tulsi and run on a faux “national unity” ticket?

Sanders is all Bernie all the time. But when you start giving him credit for being there, looking pretty good, for coming out of the hospital, for being coherent (at his age), it sounds like we’re patronizing the old guy, being nice to grandpa, but not expecting him to be the guy.

And Joe? God bless him. He must be related to George W. Bush. The English language is not, apparently, his native tongue. He mangles his words, “eliminating” Roe v. Wade instead of “codifying it.” Biden showed his real interest and strength on questions about foreign policy. He was definitely exercised, and compelling, on the shameful betrayal of the Kurds.

But for tonight it appears that the leftward-ho march of the Democratic Party is slowing. The centrists, particularly Klobuchar and Buttigieg, had a strong showing. Now THAT would be an interesting ticket.

Anthony B. Robinsonhttps://www.anthonybrobinson.com/
Tony is a writer, teacher, speaker and ordained minister (United Church of Christ). He served as Senior Minister of Seattle’s Plymouth Congregational Church for fourteen years. His newest book is Useful Wisdom: Letters to Young (and not so young) Ministers. He divides his time between Seattle and a cabin in Wallowa County of northeastern Oregon. If you’d like to know more or receive his regular blogs in your email, go to his site listed above to sign-up.
Previous article
Dem Debates: Intensifying the Civil War in the Democratic Party
Next article
Dem Debate: It’s Simple – Follow The 2018 Template!