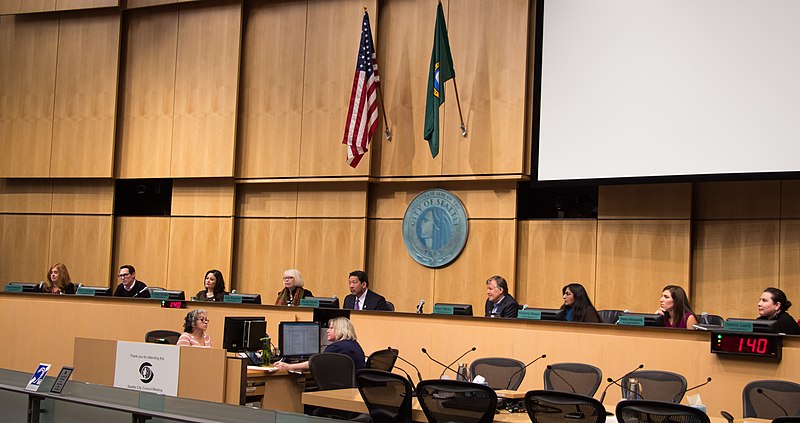 I recently attended a discussion among experts about the tactics, themes, and trends of the current City Council races in Seattle. (Election day is Nov. 5, and ballots will soon be arriving.) The session was “on background,” so in this survey I won’t be quoting, even as I liberally borrow and riff on points made by experts and audience members.

Democracy Vouchers have some unintended consequences. If you accept these vouchers from citizens, you also limit your campaign spending (primary and general in total) to $150,000. That means, after all the overhead staffing expenses, very little money is left to spend on advertising. Instead, this money has been pushed out to independent PACs, which means the candidate loses control over his or her message.

An example: Egan Orion, running against Kshama Sawant, will be boosted by nearly $200,000 from the Chamber of Commerce political arm, CASE, as compared to the nearly $300,000 Orion has raised. Sawant, for her part, gets nearly half of the $375,000 she has raised from outside the city. Andrew Lewis, running against Jim Pugel in the old Sally Bagshaw district (Queen Anne/Downtown) is swamped by $300,000 of national and independent-expenditure money from the culinary workers union, who have a lot of hotel jobs in that district. Footnote: Did Sawant, in eschewing Democracy Vouchers, undermine her claim for being funded by the people?

District Elections mean “small ball.” This is the first real election where all seven races are district (not citywide) elections, and the result is candidates going micro and local. Few are raising big ideas, but instead concentrate on governing style (listen more, get things done, attend to district needs). In tactics, this means lots of doorbelling and a blizzard of yard signs. Sawant will focus on canvassing voters by touting her rent-control proposal and confronting voters who support Orion by telling them they are effectively voting for Amazon and corporate control. One problem with doorbelling: you can’t get access to apartment dwellers.

The Stranger Effect remains potent. For many young and newcomer voters, a last-minute crib sheet is The Stranger’s endorsement list in print and on the website. The paper is doing less political coverage these days, but it showed in the primary that it still swings a lot of late-deciding voters, particularly in the First (West Seattle), Second (Southeast Seattle), and Third (Central Seattle) districts. The Seattle Times also endorses, but young and last-minute voters don’t heed it; the Municipal League seems to have dropped its evaluations; and nonprofits like Crosscut and KUOW legally cannot endorse. Given the strong primary turnout (42 percent), there will likely be a goodly number of younger and infrequent voters, which will help those candidates on the left.

Paltry polling. Candidates don’t have money to do district polls, so the only ones out there are private polls by independent groups like CASE and People for Seattle. A few peeks: Mayor Jenny Durkan remains quite popular (60+% approval), while the City Council is very unpopular (too much spending without clear plans, too much feuding, too much Sawant). While voters are worried about crime and homelessness, all the candidates who seemed to favor a law and order approach did poorly. Amazon, despite being a pinata for some candidates, is still quite popular since so many voters use it heavily. Seattle voters are still happy to raise taxes, but they have to be assured that there is some kind of plan for spending it well.

We are two cities, north and south. For example, West Seattle used to be a bungalow bastion of Boeing workers and moderate/union Democrats. It’s now very urbanized, Stranger country, and supports strongly a left-leaning incumbent, Lisa Herbold. District 2 (the ethnically diverse Southeast) has been the home of moderate Bruce Harrell (who is not seeking re-election), and most likely will elect Tammy Morales, well to the left of Harrell. Districts 1, 2, and 3 are now Seattle’s “Left Bank.”

North of the Canal, districts 4 (NE Seattle) and 5 (far north) will hold down the moderate seats. The two at-large seats, Teresa Mosqueda and Lorena Gonzalez (not up to 2021) are well to the left. That leaves three swing districts, all with close races. The third (Central Seattle) is really part of the Left Bank, whoever wins. The 6th (Ballard and Northwest Seattle) was a strong part of the Left Bank bloc under Mike O’Brien, who chose not to run again; it will now move to the center. The 7th (Downtown/Queen Anne/Magnolia) probably has as many moderate homeowners as the 5th, but it has focused under Sally Bagshaw (also not running again) on homeless issues rather than traditional “downtown” issues like development, urbanism, arts, and design. These three districts, all with close races, will hold the balance of power.

So this year will be less a change or pendulum election and more an entrenching of the impasse between center-left and left-left. Mayor Jenny Durkan, who has surprisingly been a kind of “pleaser,” probably will continue to try to mediate the factions rather than come down on one side.

A generational change is afoot. A feuding, disliked, Sawantified City Council meant that recruitment efforts to change the council did not turn up impressive challengers. But some younger candidates, such as Andrew Lewis (7th) and Dan Strauss (6th), bear watching. They, like Egan Orion (3rd), are hard to read, since they are running on “governance-style” appeals. Lewis, overtly ambitious and young, is a reminder of the days when the council attracted candidates who had visions of higher office (Bruce Chapman, John Miller, Randy Revelle, Tim Hill, Norm Rice). The inexperienced Orion may win the “most-improved” award for this class. Strauss, who has been working for Sally Bagshaw, is perfecting the non-answer. Alex Pedersen (4th), who worked for Tim Burgess, is more moderate than transit-focused Rob Johnson, who declined to seek reelection, and nerdly.

Meanwhile, in the County Council there are two “grandchildren” candidates taking on Larry Gossett (on the council since 1993) and veteran legislator Jeanne Kohl-Welles, 77. The Gossett challenger (Central Seattle), Girmay Zahilay, is 32; Kohl-Welles’ challenger (Queen Anne and north), Abigail Doerr, is 29. Both are strong comers and may bestir the sleepy county council — and be bellwethers for the next round at Seattle.

Media Desert. City Council races used to be idea-rich, ideologically competitive, break-in places for serious political talent. One reason for the decline could be the absence of local media whether from shrinkage (Seattle Times. Seattlepi.com, KCTS-TV, and The Stranger), or demise (Seattle Weekly, Seattle magazine).

The district system narrows the discussion. Civic organizations (Municipal League, Allied Arts, League of Women Voters) are lower-profile. A string of half-successful mayors (Paul Schell, Greg Nickels, Mike McGinn, Ed Murray) has turned off the citizenry. In many ways the civic sector has been obliterated by the commerce sector as Seattle has gone from being a bastion of middle-class reform to a rich and complacent boomtown. There are counter-currents: Crosscut.com, public radio, The Seattle Channel, Seattle CityClub and its debates, new organizations such as sea.citi.org (aimed at tech workers). But it does feel like a lull, a slump, a pause.

David Brewster
David Brewster, a founding member of Post Alley, has a long career in publishing, having founded Seattle Weekly, Sasquatch Books, and Crosscut.com. His civic ventures have been Town Hall Seattle and FolioSeattle.
Previous article
Start-Up Madness: Is Sanity Returning?
Next article
Intiman: The Theatre That Wouldn’t Die