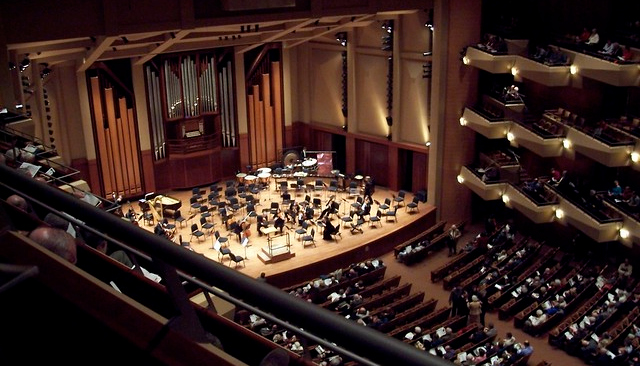 Unhappy at the very uneven acoustics at the orchestra level of Seattle’s Benaroya Hall, I decided for last weekend’s concert (Brahms and Mahler) to try the “cheap seats.” The cheapest I could find were $39 in the third balcony, a rear box to the side with obstructed view of the stage.

The sound was not very good there, so we moved after the intermission to join some friends in the middle of the third balcony, where the sound was much better and there were plenty of empty seats. (Upstairs, closer to the ceiling and the back wall for more reflections, almost always produces a better acoustic than close to the stage.)

I still find Benaroya to be a bit too “bright” in sound, favoring the treble. There was a muddiness (as opposed to richness) in the sound, which may be caused by the new conductor, Thomas Dausgaard, who is still feeling his way into what works best in Big Ben. The Seattle Symphony is also coming off decades of producing a loud, dark, rich, Wagnerian sound under Gerard Schwarz, followed by years of a lighter, more transparent and “perfumed” sound under the French conductor Ludovic Morlot.

All that aside, the concert produced the whoops and bravos and standing ovations that one now comes to expect in Seattle.

Then I came across this interesting essay about ticket prices. The suggestion from Pittsburgh is not to keep trying to sell season tickets and individual tickets at the usual high prices ($50-$120), but instead to adopt the museum model of annual membership. One joins as a member and then the ticket prices are much lower, sometimes free. ACT Theatre has pioneered this idea years ago, and it seems to be working fine, even though like most theaters and performing arts, selling season subscriptions gets harder and harder.

Here are some other examples from the Pittsburgh article.

“The St. Louis Symphony has reduced its base ticket price to $15. The Philadelphia Orchestra recently announced a program for school teachers and administrators to attend concerts at no charge this season. The Cleveland Orchestra already has a “Frequent Fan Card” for students, who can pay a flat $35 and attend almost any concert in the season, reminiscent of museum membership models. It’s quite popular — the average age of concertgoers in Cleveland has dropped noticeably. Pittsburgh Opera prides itself on offering $7 cheap seats to those under 18.”

The St. Paul Chamber Orchestra famously experimented with making some of its best seats in the house for sale for $25. The experiment cost nothing, since the orchestra got a foundation to underwrite the experiment to cover any shortfall. And the orchestra learned a lot about what its audience wanted and where the optimal price points are. It also hugely expanded the number of people in the community who donated to the orchestra in a membership program. In short, it revolutionized how the orchestra thought about its business model.

Suggestion to funding sources: Give a major organization a grant to try something like this. Join as a member and enjoy cheap tickets for any performance you want to attend. See you in the third balcony!

David Brewster
David Brewster, a founding member of Post Alley, has a long career in publishing, having founded Seattle Weekly, Sasquatch Books, and Crosscut.com. His civic ventures have been Town Hall Seattle and FolioSeattle.
Previous article
The Constitutional Case for Impeaching Trump Now
Next article
The Climate Change Debate: Shift Focus to Weather