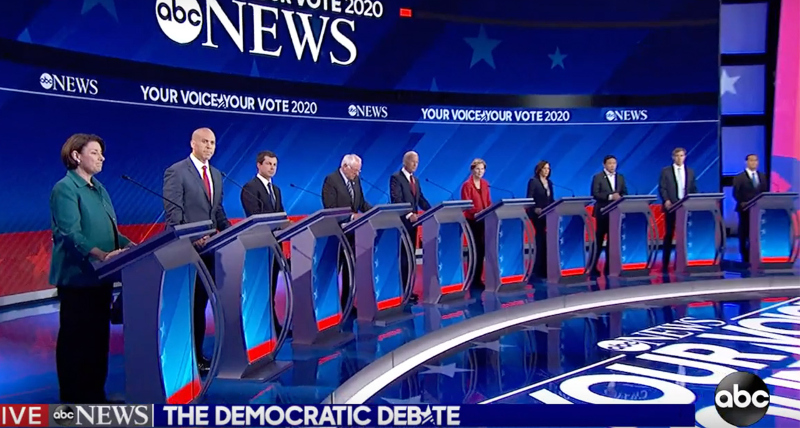 It would be a lot easier to say which Democratic presidential contenders shone in the Thursday night debate if there were only one or two existential crises to talk about.

But with so many threats to American security and democracy that every one of the 10 candidates was able to plant his or her flag on a vital issue — healthcare, gun violence, climate change, criminal justice and immigration reform. On America’s role in the world, on bringing U.S. troops home from Afghanistan, on uniting the country and educating our young.

Winners: Elizabeth Warren on Medicare-for-All and student loan forgiveness, even though she twice dodged the question of how to pay for those bennies. Cory Booker on recovering the soul of the country, rising to the moral challenges of the moment and curing inner-city ills like he has prioritized in New Jersey. Amy Klobuchar, Pete Buttigieg and Beto O’Rourke should see a boost in their lagging poll numbers after articulate, moderate and high-road attempts to urge national unity and differentiate themselves from the pack. Joe Biden managed to act like the front runner, with minimal misspeaks and spirited retorts to tough questions about soft spots in his long public service record.

Middling: Bernie Sanders stands by his socialist agenda, less of a problem than his railing at the audience like a mad professor. Kamala Harris delivered a clever challenge to Trump in her opening remarks, then told him to go back to watching Fox News. Her hearty laughter seemed inappropriate at moments that weren’t really funny. Andrew Yang came off as quirkier than usual, but whip-smart and likely to retain but not expand his niche of supporters.

Low blow: Julian Castro broke from the we’re-all-on-the-same-side posture of the debate with his hit at Biden’s age, accusing him of forgetting what he’d said two minutes earlier. Post-debate review showed Castro was wrong about what Biden had said. As Klobuchar interjected in a bid to corral the candidates back into the big tent: “A house divided cannot stand.”

Carol J Williams
Carol J. Williams is a retired foreign correspondent with 30 years' reporting abroad for the Los Angeles Times and Associated Press. She has reported from more than 80 countries, with a focus on USSR/Russia and Eastern Europe.
Previous article
Dem Debates: Down To The Big Three? Please, No!
Next article
The Great Realignment: Are You Ready For America’s Seventh Version Of Political Parties?