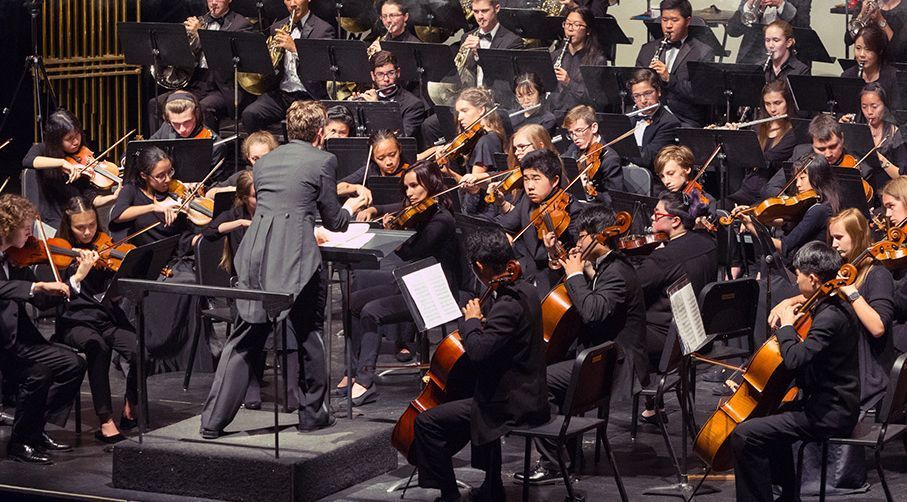 Relatively unnoticed, the Seattle Youth Symphony Orchestras have become one of the biggest arts success stories in our region. SYSO is the largest such organization in the country, and the eighth-oldest youth orchestra programs. The summer orchestra camp it runs, Marrowstone Music Festival at the Western Washington University in Bellingham, is an orchestra-training festival, the only one in the Northwest. The quality of the music-making is stunning. These musicians are playing these works for the first time and their energy is infectious. It’s like hearing these works fresh, almost for the first time.

A couple of decades ago, when Marrowstone was located at Port Townsend’s Fort Worden, our family was deeply involved. Joyce was SYSO board chair and our daughter Anne, a cellist, played at the festival and then was a counselor there for several summers. Joyce and I would always spend a week in Port Townsend, going to master classes, rehearsals, and performances. Then as now, fine players (high school and college age) would come from all over the nation, to be coached by excellent orchestra professionals. Grand, super-energized performances would result.

Last weekend, Joyce and I enjoyed a nostalgic trip up to attend some concerts in Bellingham. We found the same remarkably musical and technically amazing playing, savored the attractions of nearby Fairhaven (especially the Colophon Cafe, a dead ringer for the old Elliott Bay Books Cafe), and admired the campus and music facilities at WWU. The two-week Festival has just ended, but I recommend you go up there for a fine weekend next year (last week of July, first week of August), when the SYSO’s newly named music director, Juan Felipe Molano from Colombia and Los Angeles, will be the maestro.

A short history, since the SYSO and Festival are celebrating their (sorta) 75th anniversaries this year. The youth orchestra began in 1942 when the Seattle Symphony concertmaster, Francis Aranyi, newly arrived in Seattle, gave the downbeat. It came into its glory under Vilem Sokol, a charismatic Czech conductor who led the organization from 1960-88, turning it into a pace-setting youth orchestra(s). It now has 470 students playing in four orchestras and a string ensemble; the top orchestra performs three concerts a year at Benaroya Hall.

Marrowstone derives its name from an early location at Fort Flagler on Marrowstone Island, just east of Port Townsend. Joe Wheeler, a Tacoma music teacher, led the development of Fort Worden for arts and education programming and induced the migration of Marrowstone to the romantic, wondrous old Fort. (Fort Worden, an old artillery fort, is now managed by a new public development authority that is much better at filling up the place with summer festivals, conferences, family reunions — it even now has good food!) Strains with the State Parks administration led to Marrowstone’s exodus to WWU’s campus, which has first-class facilities at its large music school. I particularly admired the display of first-rank Northwest art in the handsome lobby areas, and the good acoustics in the main auditorium.

Highlight of the concert on Sunday was a riveting performance of “Scheherazade,” maybe the best I’ve ever heard, conducted by Alastair Willis, formerly associate conductor of the Seattle Symphony. We began the day by sneaking into his rehearsal of the work, where he fine-tuned transitions and held back the enthusiastic young musicians from rushing.

We also had a chance to talk with the new music director, Molano, who was on scene for four days of the Festival. He comes from Colombia, which has a large youth-music program modeled on the famous (and now precarious) el Sistema of Venezuela. These Latin American countries have perfected a way of spreading classical music instruction to all classes; at the top of the pyramid are members of world-class touring orchestras and conductors, notably Gustavo Dudamel. Molano is also involved with these outreach efforts at YOLA, the youth orchestra under the LA Philharmonic, and in Colombia. It may be that these youth orchestras, already full of Asian-American players, will lead the way in drawing in other minorities and young people denied exposure to classical music. Who better than SYSO?

That said, the SYSO has had some struggles in finding a successor to the legendary Vilem Sokol, someone who can build on his significant legacy; Molano will be the fourth in the past 30 years to try. Assisting will be an impressive new executive director, Kathleen Allen, and a board that has excellent leadership.

Finding the right venue for Marrowstone has been a challenge. The festival needs a bucolic setting, major performance facilities, and a congenial host and partner. Being this far from Seattle audiences (not to mention I-5 congestion) creates other hurdles. Still, the auditorium Sunday was packed with music lovers and appreciative parents up to collect their talented offspring.

A final note: One of the things I admire about Western Washington University is its full embrace of Northwest culture. The campus is a virtual museum of Northwest architects such as Ibsen Nelsen and Fred Bassetti (who did the master design). This gives it a rare unity of approach (humanistic modernism), harmony, materials, and scale. Thanks to donors such as Virginia Bloedel Wright (Bloedels were big timber interests in the area), it has fine public art.

All in all, an impressive encounter with what a small city can do, and how a Seattle arts organization can quietly move, with decades of commitment, to the front ranks.

David Brewster
David Brewster, a founding member of Post Alley, has a long career in publishing, having founded Seattle Weekly, Sasquatch Books, and Crosscut.com. His civic ventures have been Town Hall Seattle and FolioSeattle.
Previous article
August 8th: Time to bite “The ‘Burger”?
Next article
Seattle Arts Organizations Say They’re Leaders For Social Justice. So Why Are They Fighting Paying Workers’ For Their Overtime?