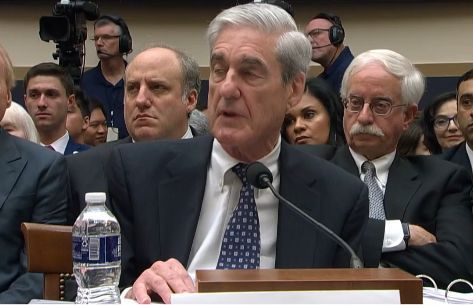 Special Counsel Robert Mueller may have disappointed Democrats with his taciturn and agonized performance before Congress, but to me it was unforgettable drama and symbolism. The more Mueller faltered, the more I saw him as a living symbol, doddering into despair, of what has happened to the Old Republic he embodied.

Like Cassandra, the Trojan seer of doom, Mueller with his distant gaze and seamed face evoked the pathos of loss that is known but cannot be averted. He struggled for words and pronounced his brutally monosyllabic elegies on the noble virtues (“True.” “Yes.” “I fear.”). In this way, he was tolling the end of his generation of civic virtue and America’s long quest to live up to the Roman virtues of the young Republic. That bell tolls for thee.

I thought of Oedipus at Colonus when the fallen king, now a blind, homeless beggar, sought a homeland that would not take him, cursed as he was. Of Lear’s sour wisdom as his realm falls apart and he loses his mind. Of Ben Franklin’s famous remark to a woman who asked him what he and other founders had accomplished in forming the Constitution just hours before. “A Republic, madam — if you can keep it.”

Those hollow eyes had watched democracy and decency die. He could not conceal his sense of plangent loss, even if he could no longer find the words. I’ll never forget that face, that body language, that agony.

David Brewster
David Brewster, a founding member of Post Alley, has a long career in publishing, having founded Seattle Weekly, Sasquatch Books, and Crosscut.com. His civic ventures have been Town Hall Seattle and FolioSeattle.
Previous article
Blown away by an unfiltered Mayor Pete
Next article
Too Far Left? Democrats Risk Losing Non-White Voters